Tuesday (16,214 steps) - Barre with Kelly. STB run club! 2 loops with Dulce. I couldn't tell what the weather was doing so I left my windbreaker in the car and definitely regretted it toward the end. I'm so sick of wind!!
Wednesday (19,042 steps) - Roost Boulder run club!

A ran with me for the road section and lower trails, but took off when we got to the single track on Skunk. It felt like a crazy hard run to me and I was feeling very discouraged with how "little" I have improved on trails. Imagine my surprise when I discovered I had PR'd the loop. This is good! 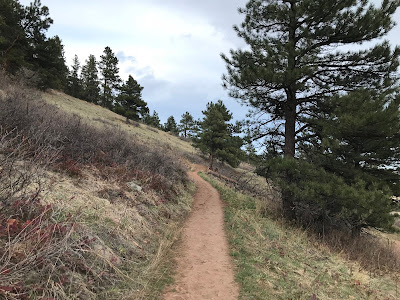 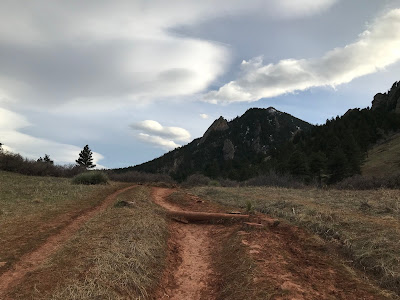 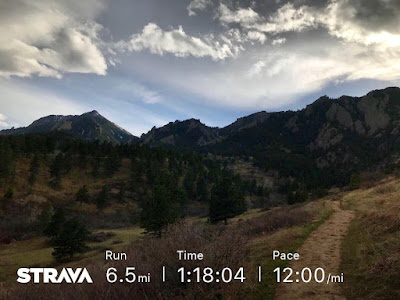 Thursday (20,312 steps) - Barre with Sienna. 6 miles around Belmar with Dulce. A bit of a struggle in the early miles, but got a pretty good groove towards the end.
Friday (5,376 steps) - Nothing! Went to a screening of "Where Dreams Go to Die," which I really enjoyed. Stayed up later than I planned so I could get my gear ready.
Saturday (36,492 steps) - Up just after 6 so I could meet Alison & Kristin in Thornton to drive up to Lory State Park in Fort Collins for the Quad Rock preview run. I had plotted out an 18 mile route and printed out maps, only to find out that at least one section we weren't going to be able to run because of a combination of slushy trails and nesting eagles. Anyway, we were told that if we weren't familiar with the trails that there would likely be "locals" we could latch onto. Shockingly, we were WAY slower than the slowest, so thankfully I had studied the maps enough that I at least recognized trail signs. FoCo had gotten more snow than we did and the it was tough to do a lot of running. We did, however, get a lot of vertical (over 3500') and none of us fell. 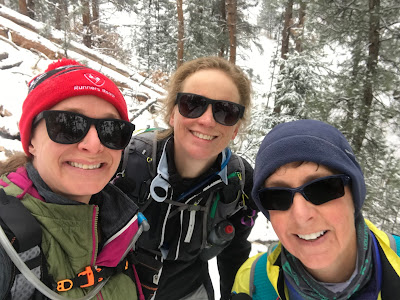 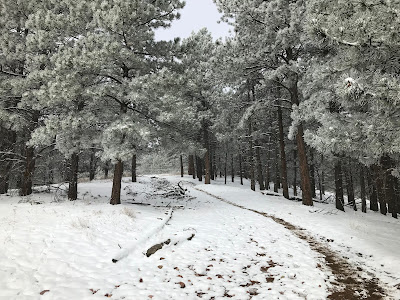 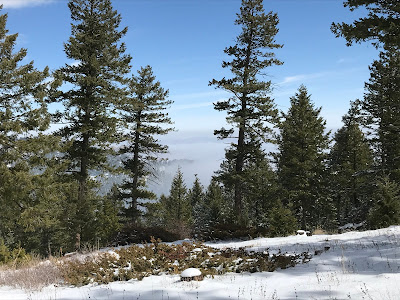 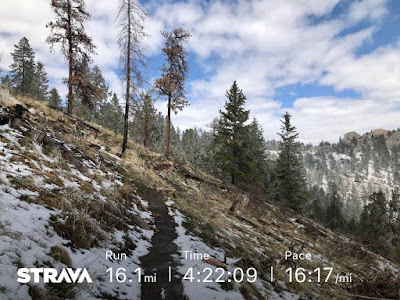 This was a success in the fact that none of us were super thrilled about the cold or snowy/icy/muddy trail conditions. Not sure if I feel more confident after this or not. Most of the food was gone by the time we got back, but I did have a veggie burger. We stopped at Vern's on the way home for a snack and celebratory beer. A and I later picked up Torchy's for dinner.
Sunday (17,368 steps) - What a cluster this morning was. I had gone to bed early because I was so exhausted and figured we didn't need to plan a ton of time to get to RMRR. I knew the race was at City Park. I didn't map it because it was a Sunday morning and why bother, there wasn't any traffic. ONLY, at 20 minutes until the start, I pulled up to Wash Park. WTF!! Why would I have driven there?? A had to quickly re-route us to the correct park, and our 20 minute cushion became THREE MINUTES. We had to circle a few blocks before finding street parking and then had to run to the start. I got in the bathroom line while A got our bibs. Then A tells me her watch is dead! I offer to let her use mine, and I can just record mine on strava. I forgot that I didn't have the background app refresh turned on, AFTER I started running. I turn it on to still get a notification I need to turn it on, so I had to scroll through and find it for strava specifically. Grrr. With that out of the way, I tried to just get into a grove. Running the app I had no idea what pace I was running, which was weird. Running east felt really hot, and then I was treated with a nasty headwind when I was running west or south. Blah!!! I slammed water at the aid station just after mile 2, and then went out for the second half. A passed me just before the 3 mile marker (even though she started like 7 minutes after me). I had to take one brief walk break as the wind was making me feel like I was working way too Otherwise, I think this went as well as could be expected with all our snafus and me running 16 miles the day before. 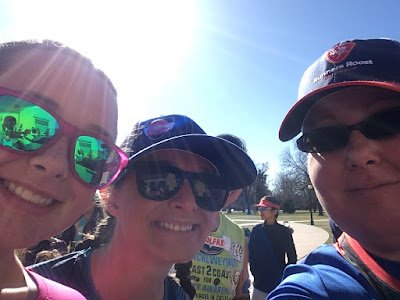 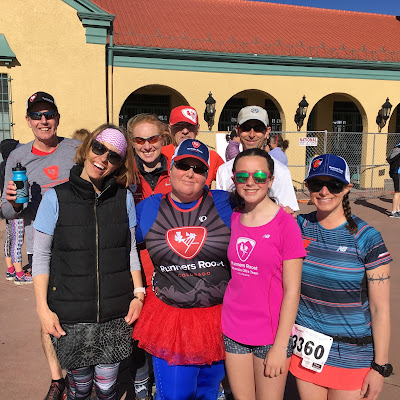 Not sure of my official time, but think I was right on par with my predicted time. (Everything will be a bit off because I didn't start recording on time): 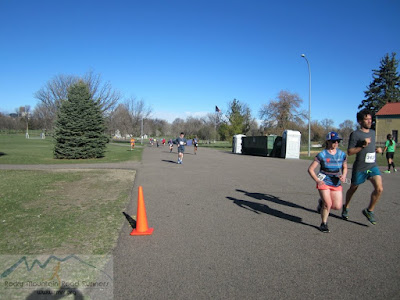 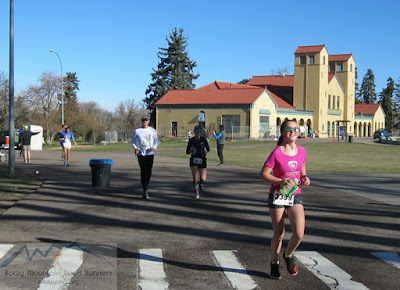 She got fifth place for that effort (woot!). 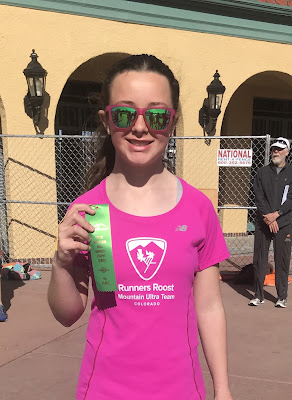 The second she got her ribbon we had to run to the car so we could drive to the finish line of the Platte River half marathon, where we were volunteering. We were assigned to hand out medals for the relay. After 2 hours, the last folks were in, and we were able to get some food. 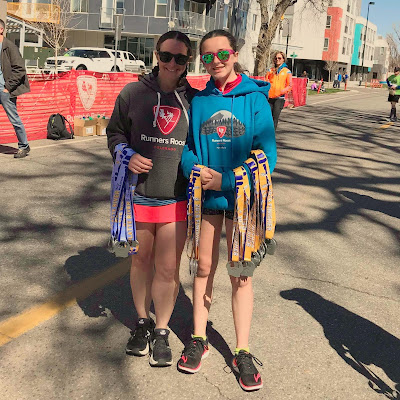 On the way home, I stopped to get a new sports bra (it's actually really difficult to find ones that are seamless and don't have pads), and a new pair of Hoka trail shoes for A (hard to believe she has been wearing her one pair for almost a year already!) Afternoon is a blur, but we watched Walking/Talking Dead. Goodbye weekend.
Monday (18,537 steps) - Barre express with Karen. A change to the Monday 6 am class, a 40 minute class that starts 15 minutes later. Basically, felt the same difficulty-wise as the full hour, only we crammed it into less time. Basically, quicker transitions and less stretching during the class. I liked this format. New Terrain run club! A was running with Paula and her boyfriend and I decided to do some repeats of the lower Lithic trail to get more vertical. Not as much climbing as I'd hope, but I did get over 1000' in 5.5 miles. It wasn't as warm as I'd hoped it would be and my hands were pretty cold by the time I got back. 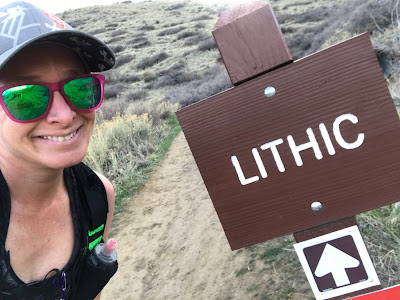 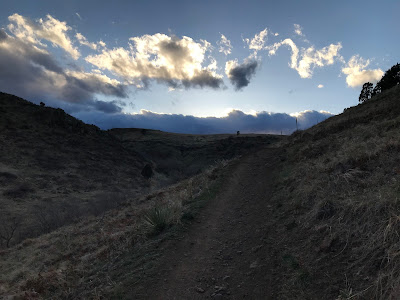 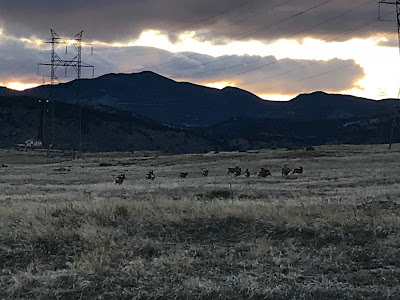 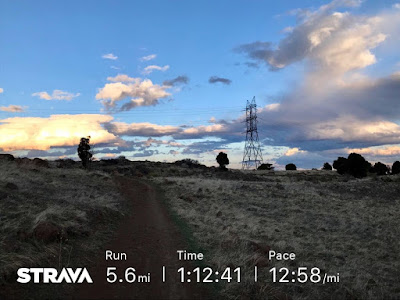