Tuesday (22,341 steps) - Speed work! We had to drive alllll the way down to Greenwood Village for this one.

Took A to the doctor for a follow-up appointment and then on to work. The staff took me to lunch at Marlow's, I had a filet mignon steak sandwich. Holy cow was it good! Gymnastics, then home.

Wednesday (21,113 steps) - Denver run club. A decided to run with Heather. Mo, Colfax and and I ran a modification of the route, ending with 4.7 miles. There was another beginner trail runner panel, but it was upstairs and there was no seating so we ended up leaving to go to dinner with Mo, Sheila, Ted and Dave. I had a key lime beer, which was strange, but not terrible. Burgers were on special so I had one and it was really good. I was very surprised when I got back from the bathroom to see the table had bought me dessert and sang happy birthday to me. Turns out they also paid my bill. So nice! We didn't get home until almost 10 though - way too late!
Thursday (16,835 steps) - Forecast was NOT wrong. It was snowing when we got up - enough that I had to scrape the car. Good lord, it's mid May?! It snowed all day, so A's soccer was canceled yet again. Luckily I was able to arrange a ride for her - I picked her up around 5:15 to go to Belmar. A decided not to run, Mo, Colfax and I still went out for the big loop. Brrrr. It was wet and cold. 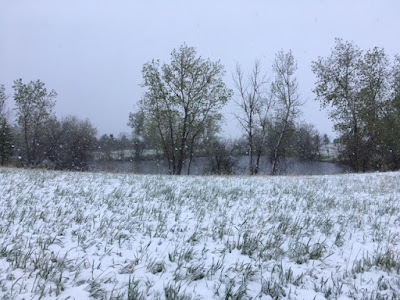 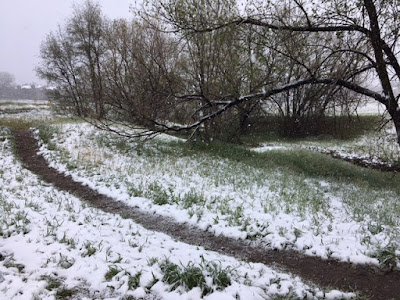 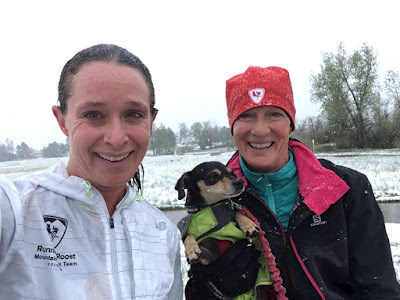 Went to Rocko's and got quesadillas, nachos AND a beer. Jeff bought me sopapillas and the table sang happy birthday - probably best birthday I could hope for on a Thursday.
Friday (10,877 steps) - A was going to the Royal Gorge with her Scout troop right after school so I made plans with Jessa for a birthday dinner and drinks. (This is the most I've gone out to eat in an eternity). I worked late to make up hours and then home to change clothes before meeting up with Jessa at Grand Lake brewing. Grilled cheese and a stout for dinner, headed home around 9.
Saturday (31,414 steps) - I should have been running the Palmer Lake half, but it has been postponed until August because of all the snow. So in my head I thought I might run 12-14. I wasn't feeling great and hasn't gotten enough sleep, so I just ran 10 with Alison at Runners Edge. 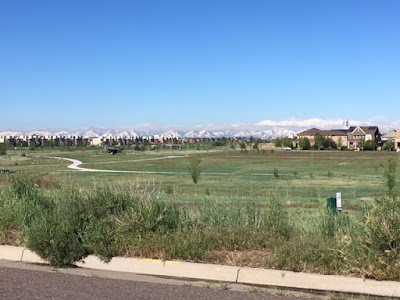 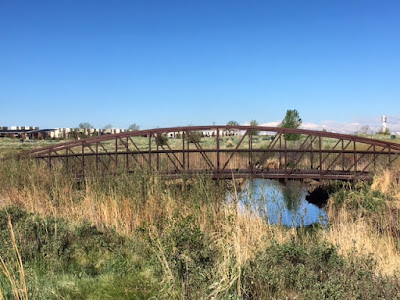 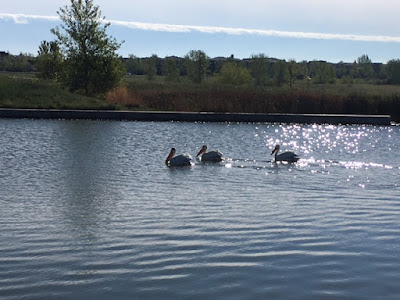 I had enough time for a quick trip to Target before going to barre (for the first time in over a week). It was tough! I barely had enough time to pick up some pho for lunch, eat and shower before heading to the Colfax expo. Chatted with some people before going to Sparkle Skirts. I had signed up to work for a few hours in exchange for "sparkle dollars." Time flew by and it was a fun experience. Mo and I met up and went to Champ St for burgers (again). I had never been there. Food  was good and they had $1.50 beers on tap.

While I was doing all that ^, A was at the Royal Gorge with her Girl Scout troop bridging from Juniors to Cadettes. 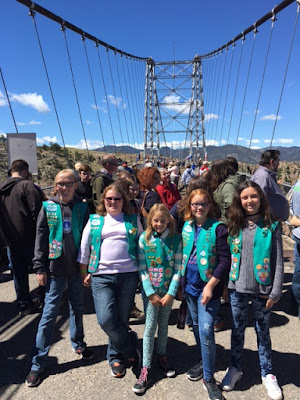 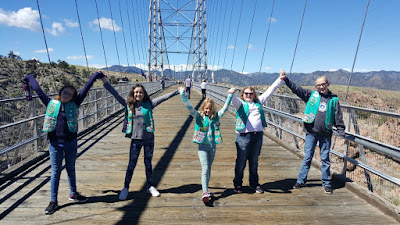 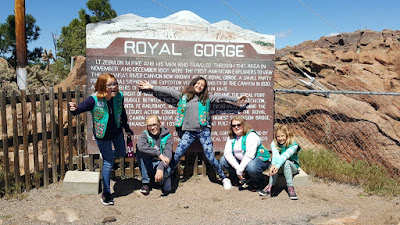 Picked up A at a friend's house and then home.
Sunday (17,745 steps) - 4:15 wake up call for volunteering with Pete at the Colfax marathon. We were assigned to Sloan's Lake aid station, which runners would pass through twice. It was way colder than I expected it to be - especially since we were set up in the shade. 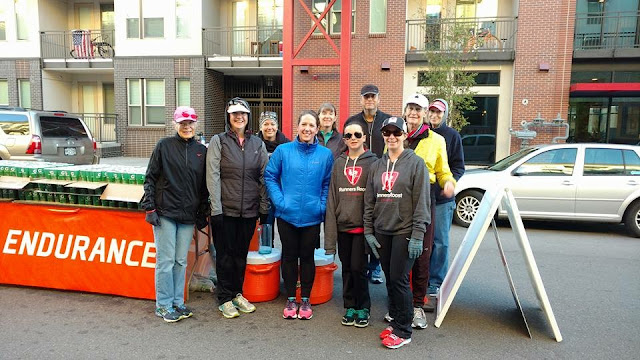 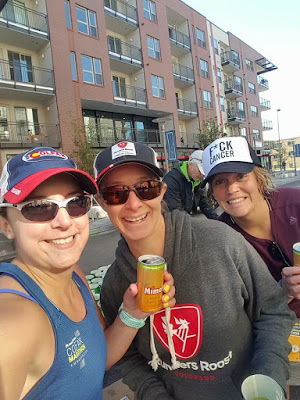 I saw lots of people I knew, which was fun. We tore down by 9 and then went to the finish, where we ended up staying until about 1. 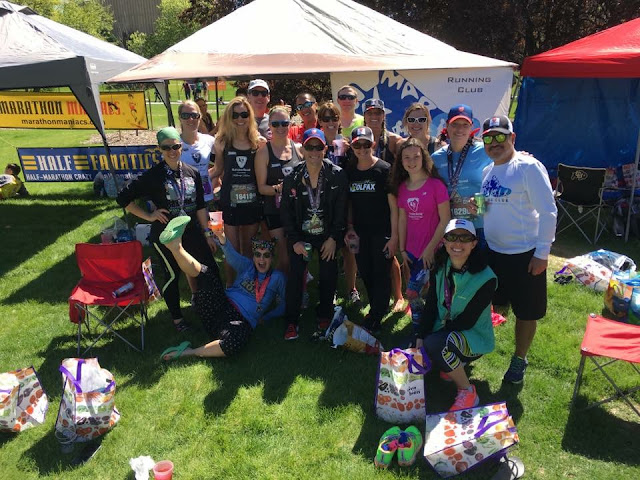 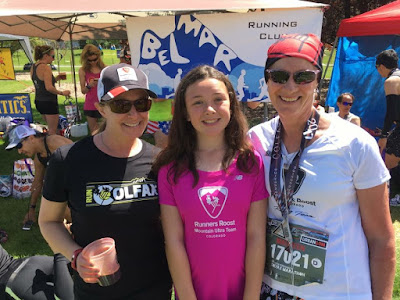 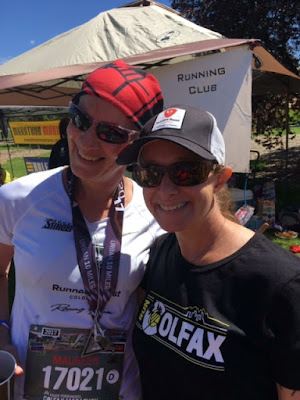 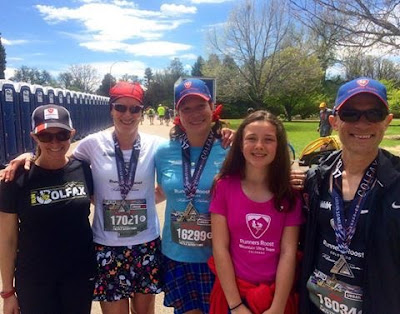 All the food was gone early so we w went to IHOP with Mo for a very late lunch. Quick trip to the store and then finally home for some sitting. Volunteering may be more exhausting than running!
Monday (13,453 steps) - I got my standing desk at work! Unlike my last job, all I had to do was ask for one and they told me they just want me to be "comfortable." Still waiting on my second monitor, but that should arrive soon. 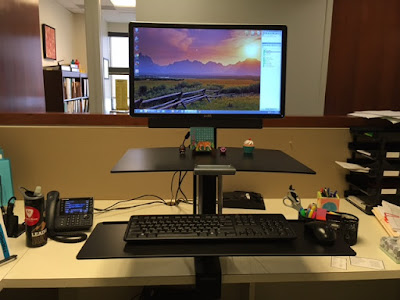 Barre with Jen after work.