Tuesday (12,978 steps) - Barre class at noon with Laura. She changed up the formatting a bit and I'm sad to say that I just did not like it as much as I usually do. Which is sad, she is my favorite instructor! It was Jackie's last day, so that was super depressing. And THEN, I got an alert that my credit card number had been stolen. GRRRR!! Took A to gymnastics, she had testing again and will remain in Level III. She has improved a LOT (especially her form in handstands) and she wasn't too upset about where she is at. Quick stop at the store on the way home since we are out of food. Womp. Made some spaghetti and it was fabulous. Of course we didn't even sit down to eat until 9:00, so it was a crazy late night. Again.
Wednesday (20,082 steps) - Not nearly as warm as it was supposed to be today. Went to run club and ran alone with Colfax since Heather decided to just hang out at the store. The run was pretty exciting because we saw a fox! 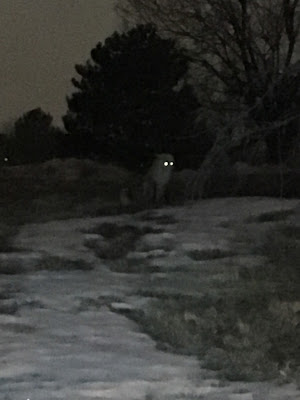 We ended up running 3.5 miles and it wasn't terrible. A sold some cookies and by the time we left the weather had taken a turn for the worse. It was SUPER icy and cold when we left, and of course I had to stop and get gas. Another late night for dinner.
Thursday (15,903 steps) - Woke up feeling OFF. I think I have finally come down with the cold that everyone else has been passing around for months. On the way to A's school we almost got in a nasty wreck. The roads were still incredibly icy and my car would just NOT stop. I pulled the e-brake and Bee Rad slowed down... but turned perpendicular into the fast lane. Thank goodness no one was behind us and we managed to safely get where we needed to be. Stupid winter. Spent the morning taking cold medicine and sneezing. Run club at Lakewood - which was a special event with Anton Krupicka. 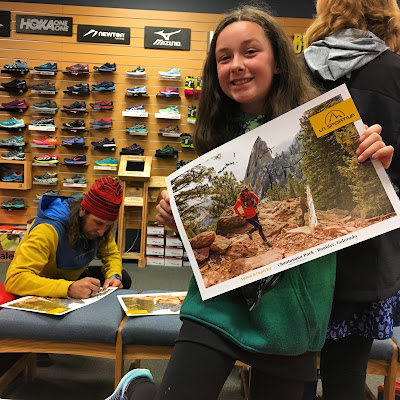 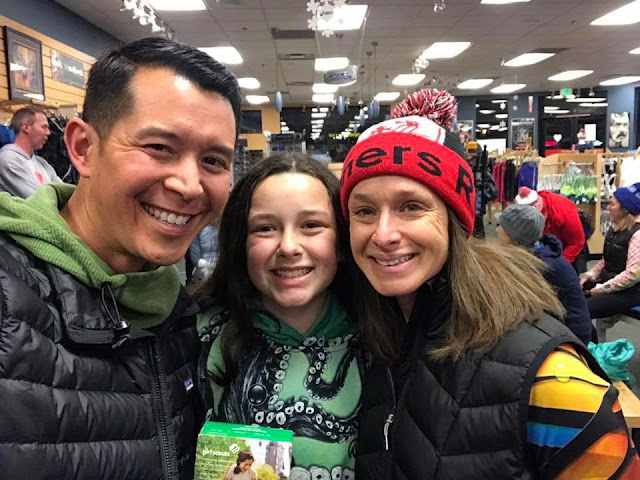 He is one cool dude! A and I skipped going to Rocko's because 1). we are trying to save money and 2). decided to have chicken noodle soup instead. Again, not eating until 9! We did at least manage to get most of our packing done for the weekend.
Friday (13,673 steps) - Tossed and turned ALL NIGHT LONG. This damn cold is miserable. Actually got my taxes back, which was MUCH sooner than expected. Since we are trying to "minimalize," I didn't even spend any of it, other than to pay off the credit card. Picked up A and took her home so I could take a barre class right after work. I wasn't optimistic, but working out actually made me feel better. We had some last minute packing to do, tried to go to bed early.
Saturday (13,687 steps) - Drove down to Heather's to get there by 7:00 to drive to the Centennial airport. H2 drove with us and we got there right after Mo, Jandy and her daughter Mady. We left a few minutes late and arrived in SoCal with no issues. 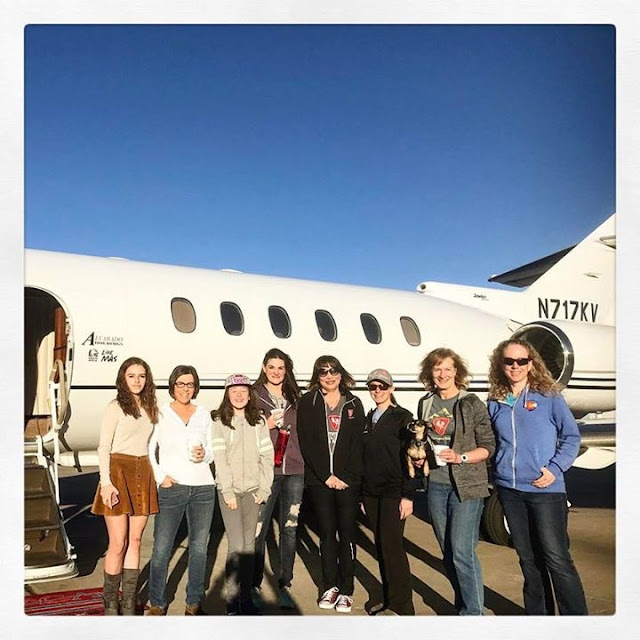 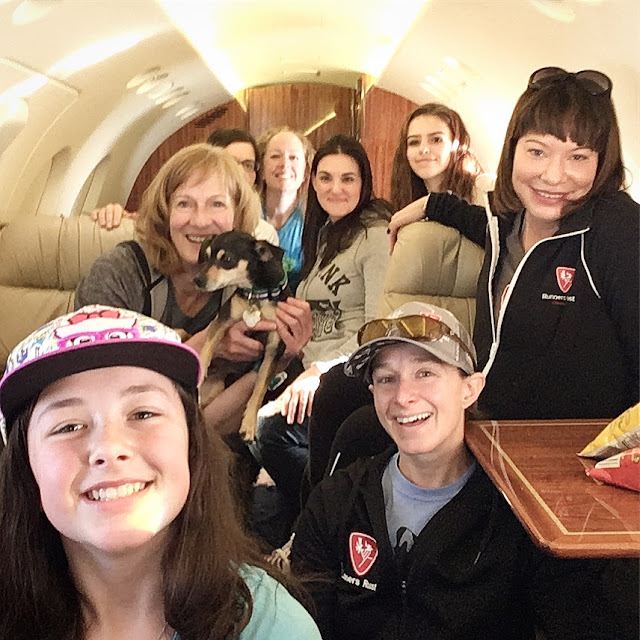 Went straight to the house on Newport Beach and then walked over to Starbucks (although I just wanted to get out, didn't want coffee). 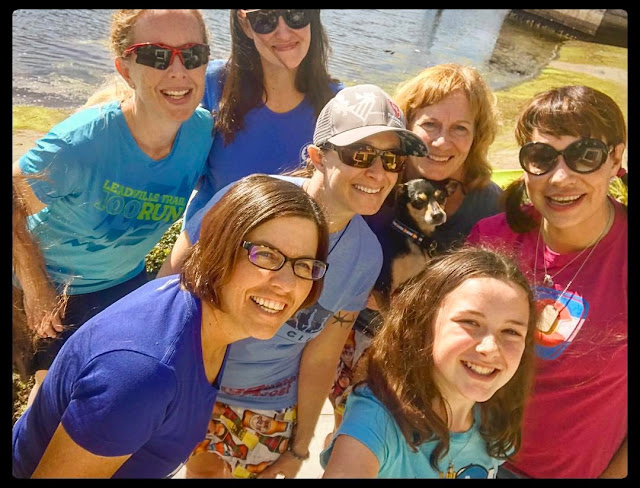 We later went to Woody's Diner for lunch and then later to the expo. In the afternoon everyone else went to the beach, but I felt terrible, so I stayed back and took a nap instead. No real recollection of how the night was spent, but we ordered some delicious pasta for dinner. The portions were ginormous and me and A shared an entree and still had some left over. In bed early-ish.
Sunday (33,126 steps) - Actually slept, but was woken up when Lisa and Jandy left for the race - they were running the marathon and H2 was driving them to the start since they had to be there more than an hour before we did. Perks of staying at a place right down the street from the race start! After Heather G. arrived we went headed over to the start. Ran Surf City half. 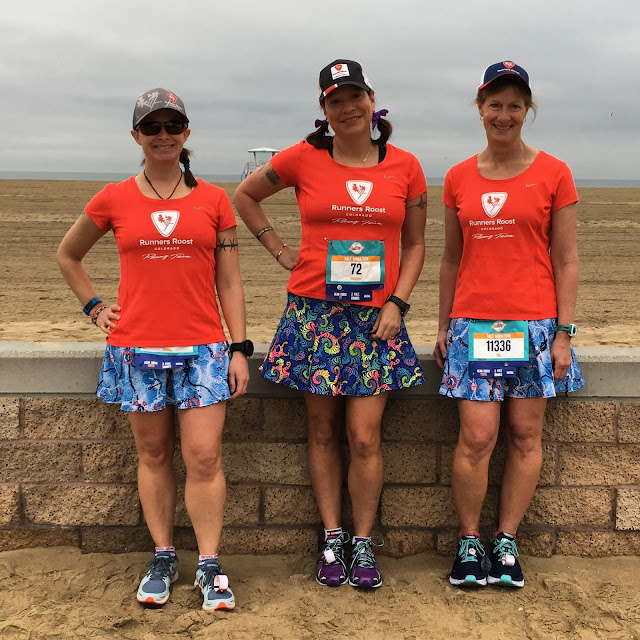 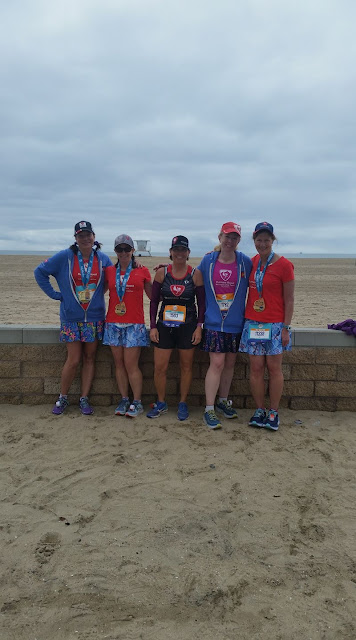 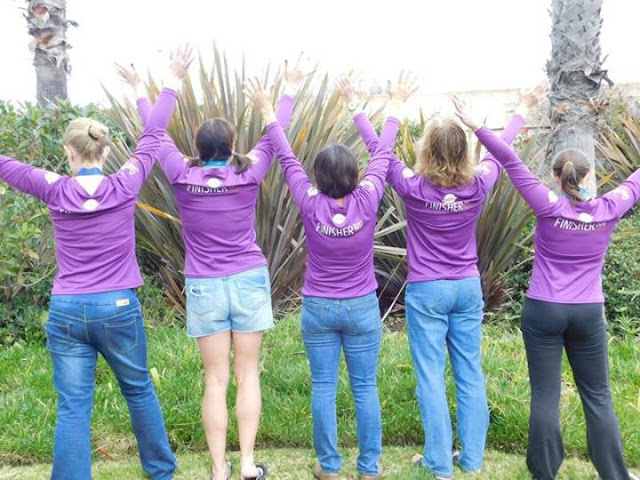 We actually brought our IDs, so we got some beer at the finish line. It was chilly and overcast and we decided to just go back to the house to shower. The Heathers picked up In-n-Out for lunch and we prepared to watch the Super Bowl. I dozed off on the couch on and off throughout the day.
Watched the game, which actually turned out to be pretty exciting. Picked up pizza and beer for dinner. Passed out on the couch EARLY.
Monday (13,414 steps) - Stupid gloomy morning. It was windy and rainy all day, so all of us were in pretty terrible spirits. A was upset that we would not be going to the beach. We ended up going to the mall and walking around, which is especially boring when you don't buy anything.
Late lunch at Yard House and ordered food to go. Plane ride back was bumpy and we arrived a bit late. By the time we got to Heather's house to pick up Bee Rad and get home, it was almost 10:00. Super late night and long/short weekend.