Tuesday (29,096 steps) - Motivated! Up early to run at the lake. I wore long sleeves since it's been cold in the morning. Within 15 minutes I was warm enough to lose it, even though it was decently windy. I did have to wear my headlamp for all but the last mile. I was a bit faster than I expected and it was not awful. 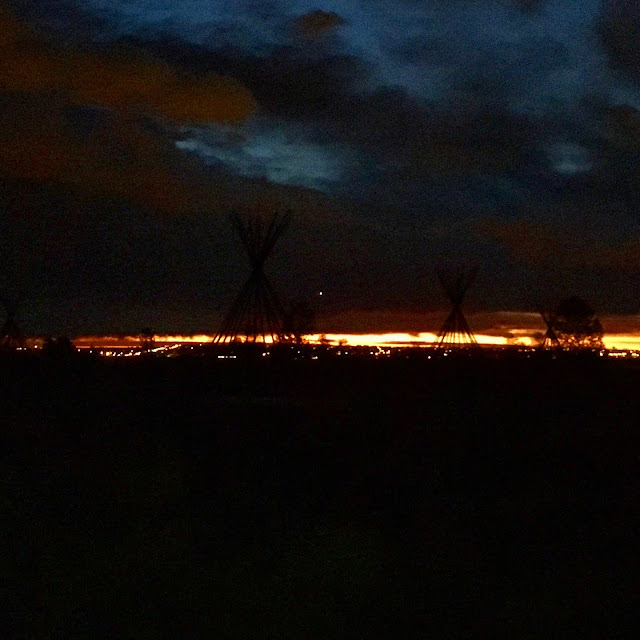 Went to Laura's barre fuzed class during lunch. Tough workout, like always. After work, picked up A from soccer, went to the library for some homework, then gymnastics. As always, one of the busiest days of the week.
Wednesday (19,700 steps) - Barre class at 6:00. I ended up having to leave work early to pick up A after school because her soccer practice was cancelled. She did homework while I went back to work until it was time to go to run club. We had just enough time to go to Nothing Bundt cakes before the run. Mo was there with Colfax, so A stayed with Maureen and I went for a run with Colfax. It was a little chilly, but I was ok in my short sleeves and skirt.
Thursday (17,914 steps) - Barre class at 6:00. So tired! I had a long day at work and by the time I picked up A we were running a little late for Belmar run club. Met up with Maureen and A went with her again while Colfax and I went for a short run through the park. Interestingly, even though it was a lot warmer, I felt colder in a tee and capris than the night before. 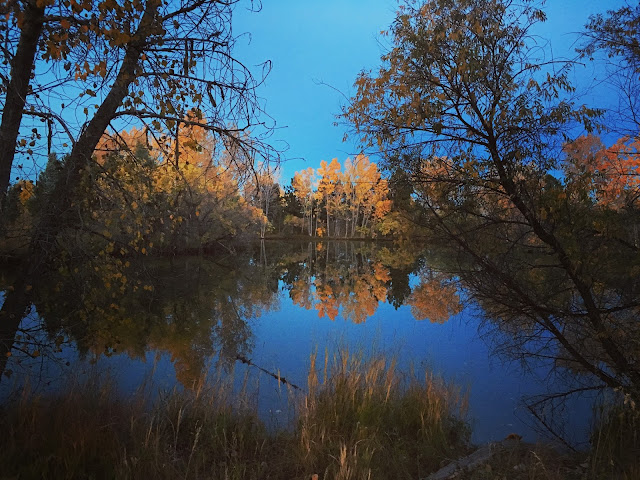 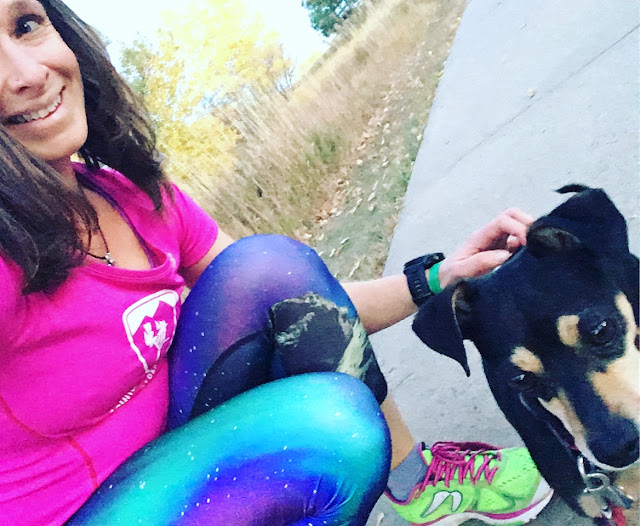 We went to Rocko's afterwards for nachos and a beer (for me).
Friday (21,611 steps) - A had the day off from school, so I also took the day off. I went to barre at 7:15, then A and I packed and headed up to Berthoud Falls to hike at Jones Pass. There were only two other cars at the trail head and we lucked out never seeing anyone else on the hike. We were both overdressed and had to lose layers early in. I was a bit bummed that we seem to have missed all the fall colors, but it turned out to be a gorgeous hike. We had lunch at 11,700' IN SHORT SLEEVES. Once we got just a bit higher than that (and above treeline), we had to put on jackets as it got very windy. 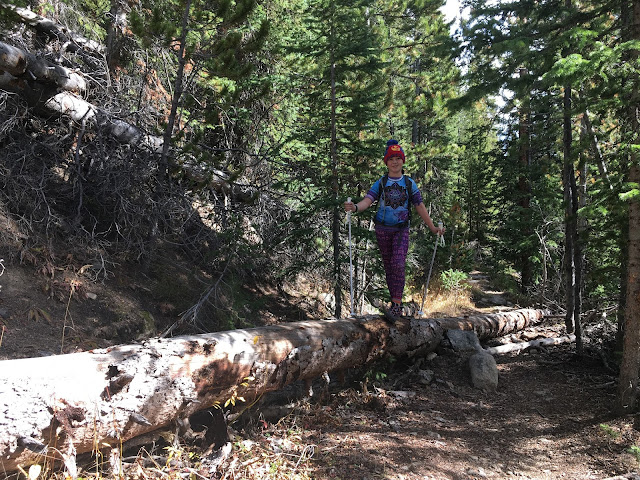 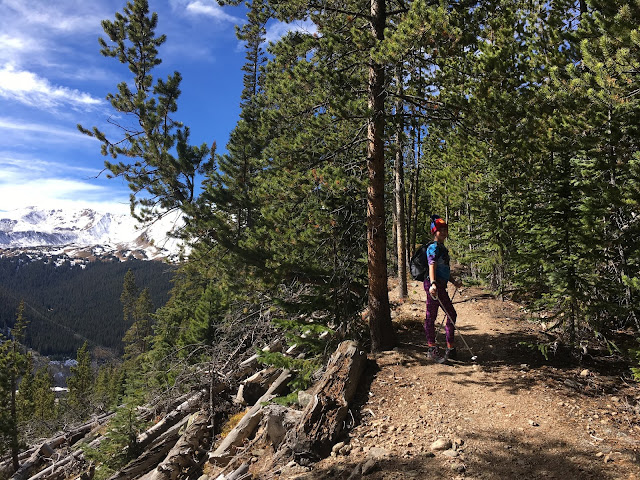 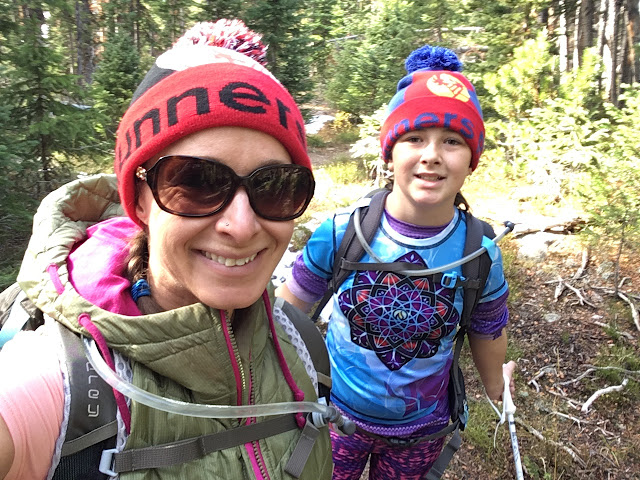 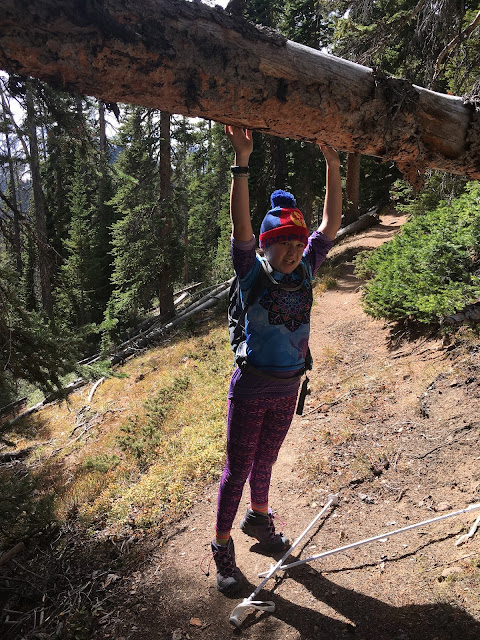 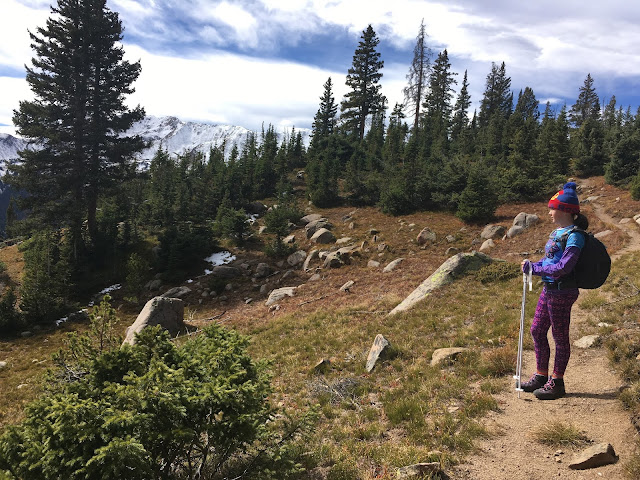 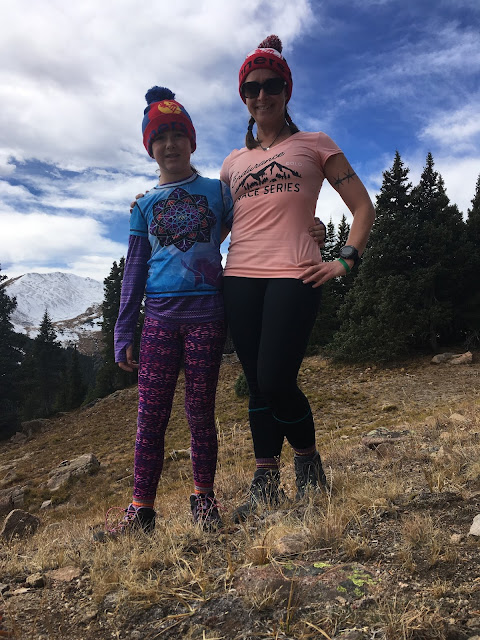 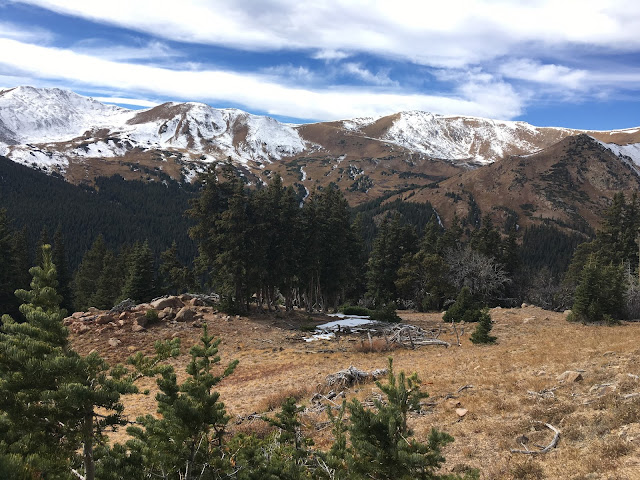 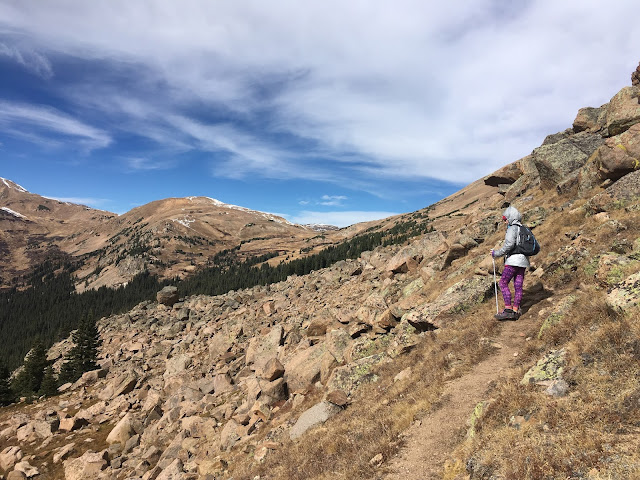 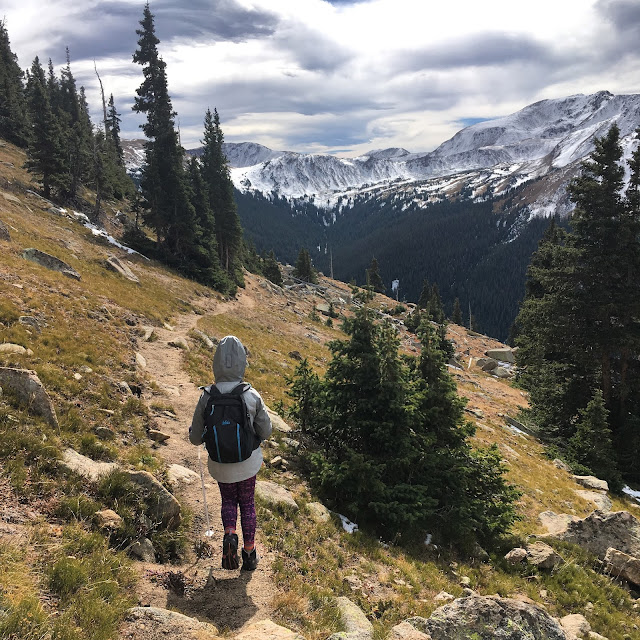 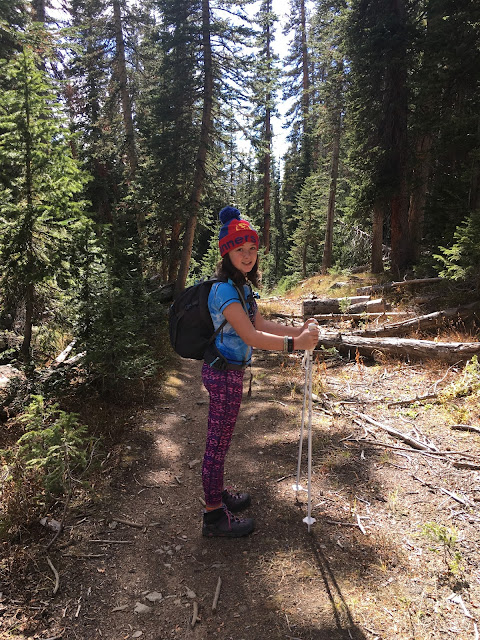 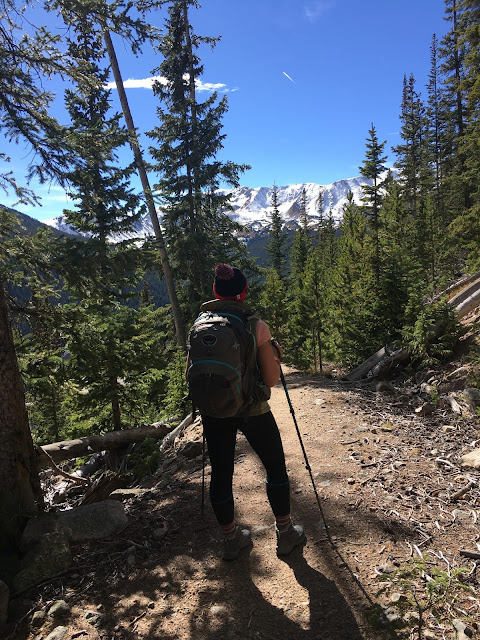 On the way down, we were able to lose the layers again when we got back into the treed area. We drove to Central City to meet up with Kathy from Elevated Legs so I could pick up my rental. Then on to the expo for Denver Rock n' Roll half marathon. Expo is still at the horrible National Western Complex, although it was better than last year's. We wandered around for a while chatting with people and bought some fun Injinji Halloween socks. THEN, we drove up to Godfather's pizza for dinner. Such a busy day!
Saturday (21,523 steps) - Drove down to Stapleton for Runner's Edge. Finally healthy enough to run with my old pace group and did 6 miles - still beautiful fall colors in the city! 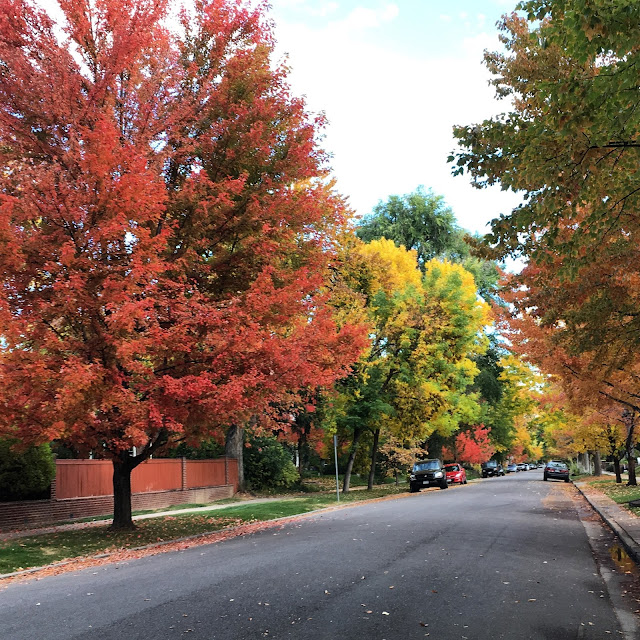 Then I headed over to a barre class at 9:30. Just barely had enough time to shower before going to A's soccer game. 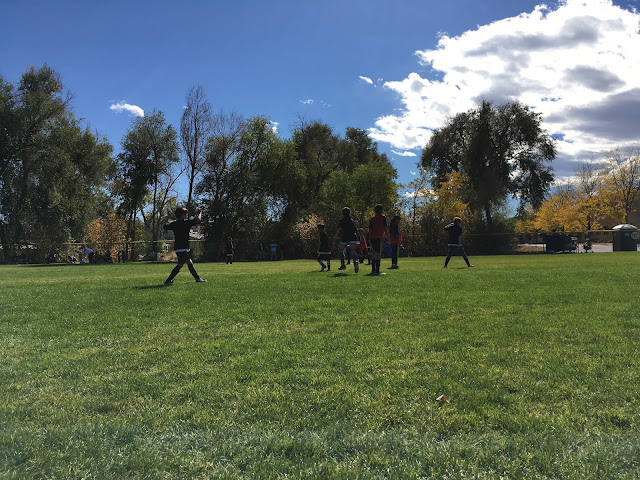 Lisa met up with us and then we went to HuHot for lunch. Went home to sit in the Elevated Legs and ended up napping until it was time to take A to Rachelle's birthday party. After I dropped her off I went to Carrie's birthday party, only staying until about 8:30.
Headed home to watched American Horror Story and get my race clothes ready.
Sunday (38,361 steps) - Rock n' Roll Denver half marathon. 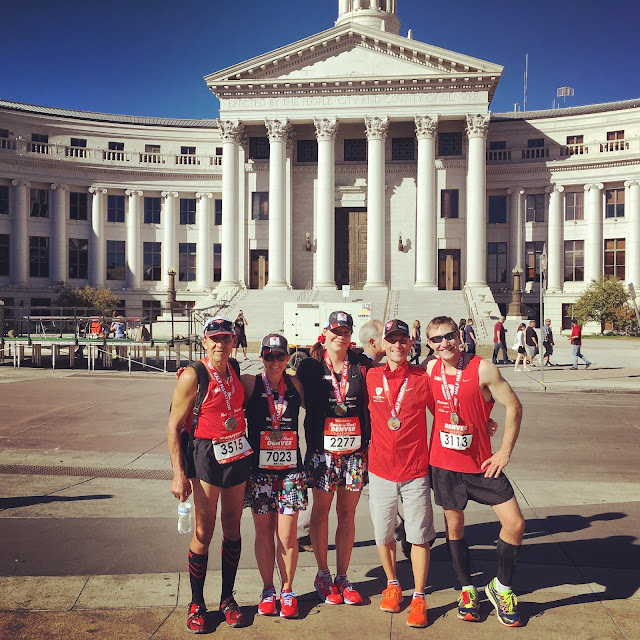 Drove back up to Thornton to pick up A from her sleepover. I was ravenous after the race, and decided I wanted a burger. We went to Red Robin and just barely missed the busy lunch rush. Showered, then sat in the legs and napped on and off. Barre class at 4:15. I'm a few classes ahead at this point, but my competition is fierce - and willing to come more than once a day! Dinner, laundry and TV. Went to bed early - A was exhausted from staying up too late at her party and I was exhausted from doing all the things.
Monday (10,577 steps) - Finally got to "sleep in" until 7:00. Busy day at work. Went to barre class after work/school. Dinner and watching Quantico.