Every year I say I'm not going to run the Rock 'n' Roll Denver again, and then they do a super cheap registration. For the 2016 race, I registered on October 20, 2015 (two days after the race) for $50 plus a $7.99 processing fee. Have I mentioned how much I hate processing fees?

The expo was held again at the National Western Complex. Parking is $5, which is super annoying. The venue is not the best for an expo. A and I went to the expo on Friday afternoon, however, and it wasn't too busy. And it was WAY better than last year. We spent over an hour walking around and talking to people. We both got fun Halloween Injinji socks, and NOTHING else.

In 2015 I had parked at the garage I use for work because it's freeeee. However, I remember having issues getting in and out with road closures. A few days before I looked at the road closure map and decided I didn't want to screw around with it. Instead, I planned on meeting up with Heather at her dad's office and walking over. We made plans to meet at 6:00, and I left the house a few minutes late at 5:37 (yes, I looked), and still go there a few minutes before 6. Waaaay easier than anything I've done in years past.

It took us just a few minutes to walk over to the start area, and since Heather planned on checking a bag, I kept my hoodie on. We ran into tons of friends and teammates before the start. Took lots of pictures and used the bathrooms a few times.
Heather was supposed to be in corral 2, and I was in 7. By the time we tried to feed in I think we ended up in corral 8, which was fine by me. I love how every year I estimate a stupid fast time that places me in a corral I have no right to be in.
I warned Heather that I was going to go out slow and try to not burn out like I did the year before. The tall buildings were messing with my GPS a bit, it was hard to tell what pace we were running. My legs felt very fatigued from all the barre classes I have been taking (6 days in a row before the race), but thankfully, no tight calves.

The course was completely different (yet again). We ran up 14th to start, and then we weaved through random roads downtown. Did not love this section. We looped over by the Pepsi Center around mile 2 (which in the past was about a mile in) and hit the first aid station about mile 2.5. We ran by Coors Field and up the big overpass early (I swear that in the past this has been much later in the race). The Runners Roost aid station was at mile 4, and as always, was a great boost to see so many familiar faces helping out.

I was feeling ok until we headed down Lincoln. That's when the leg fatigue really set in and I started taking walk breaks. The 10k headed towards the finish while we turned up 17th, and I walked up the entire hill, much to Heather's dismay. This section of the course is one of my favorites because as we head out to City Park all the fast runners are coming towards us. We managed to see quite a few Roosters, including Eric, on our way to the park. Runners Edge had the aid station within the park, and again, it was awesome seeing friends helping out. Pete gave me a high five and then we headed out for the rest of the loop in the park.
David was sitting on top of his van using his bullhorn to cheer people on, which was fun. The out and back on 17th was a little brutal, although I managed to make it until the loop by East High School before I pretty much fell apart. I had to take way more walk breaks than I would have liked. Heather is a trooper and still stuck with me. (It will be interesting to see how I can run on rested legs after my barre challenge is done).

We turned south on Sherman and ran by the Capitol, where a man was yelling "look at the twins! the twins!" Except for Heather being about 6 inches taller than me, I suppose so. I had NO kick left, but managed to run through the chute without walking. The course measured incredibly long (much like last year).

There was NOTHING in the finish area except for water, chocolate milk, cups of fruit and Cheez-Its. Womp. 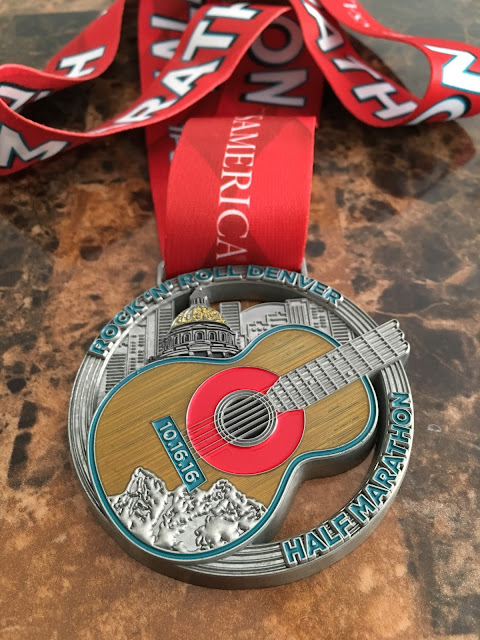 We met Eric just outside the finish area, and I checked my phone to see that I needed to start heading towards Thornton to pick A up from her slumber party. We wandered around the finish area before getting a small team picture, and then we walked back to the car.
All things considered, especially since I spent most of the summer injured, the race turned out OK. I did, however, barely beat last year's time.