Pretty bummed for the last race of the Endurance Race Series, the Louisville trail half marathon. I had only run this event once, back in 2013. Then, the race was in early May, and I remember it being chilly and not a lot of fun. Thankfully, I have runnesia, and it was much better this time around!

We were up early to be out the door by 6:30, arriving at the start around 7. The plan was to pick up our packets (A earned another free race entry for all her volunteering, so she was running the 5k) and for me to take the 7:30 early start. (I wasn't planning on taking the early start originally, but since we had tickets to an early afternoon Broncos game, I needed to get an early start).

Packet pick up was a breeze and there was no line at the port-o-potties. We went back to the car and got everything ready and then met up with Brandon at the Hoka tent so I could demo some shoes. Unfortunately, I can't remember which ones I tried. The laces were tighter than I liked and the toe box wasn't as wide as I prefer, but they were fine. With a little more time/prep I'm sure they would be a good shoe - and not nearly as "tall" feeling as my Cliftons.

Anyway, I was glad that Stacy remembered where the course went, because I sure didn't. Anyway, off we went. First we headed out west on the Coal Creek trail. This is the section I am most familiar with in other races. I had kept my long sleeve shirt on because it was still really cold when we started. I was happy to have it, I pulled the sleeves over my hands - they were freezing!

The first part of the course is fairly flat and not technical. There was a small, maybe half a mile section that was on pavement, but most of it was on a wide, dirt path. 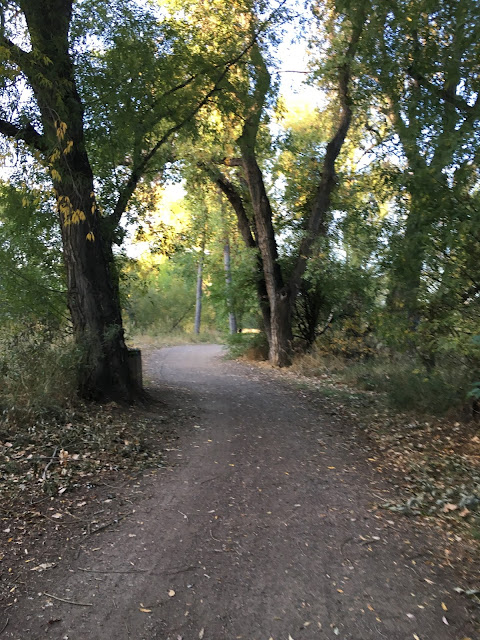 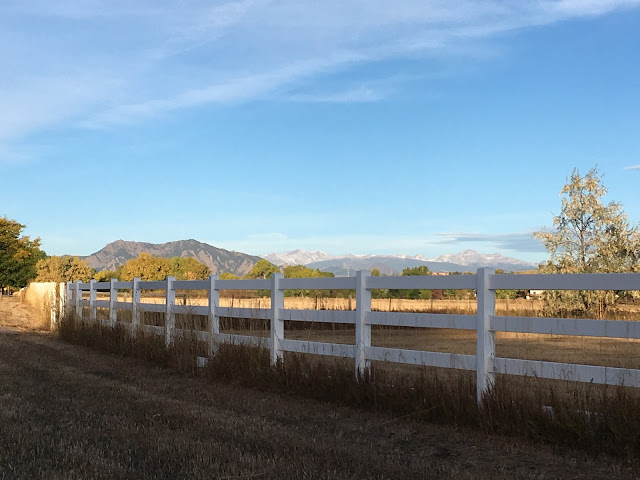 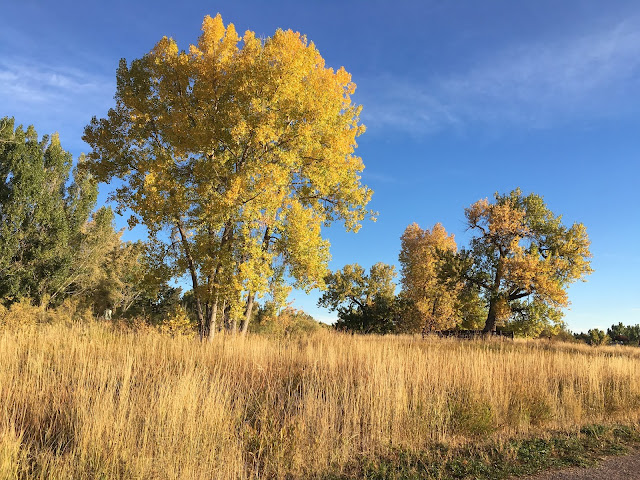 After a half hour or so (maybe about 2.5 miles in), we looped around a small lake/pond and headed back the way we came. 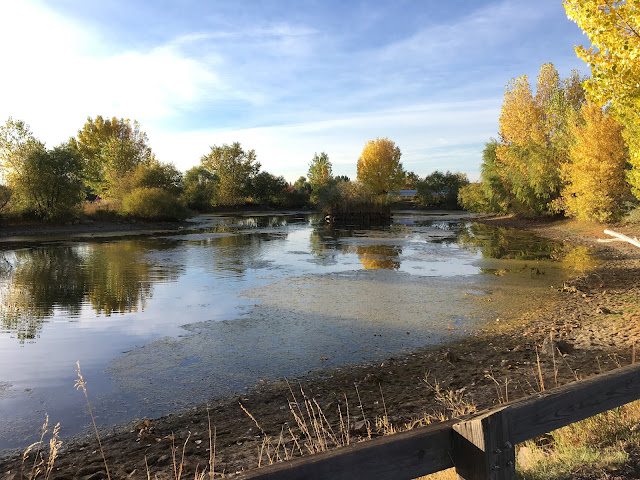 There was a coyote hanging out in the fields nearby, causing havoc with the people walking their dogs. He didn't seem interested in the runners, however. Shortly after the turnaround I shed the extra layer, AND the lead runner was heading towards us (a Roost teammate, of course). 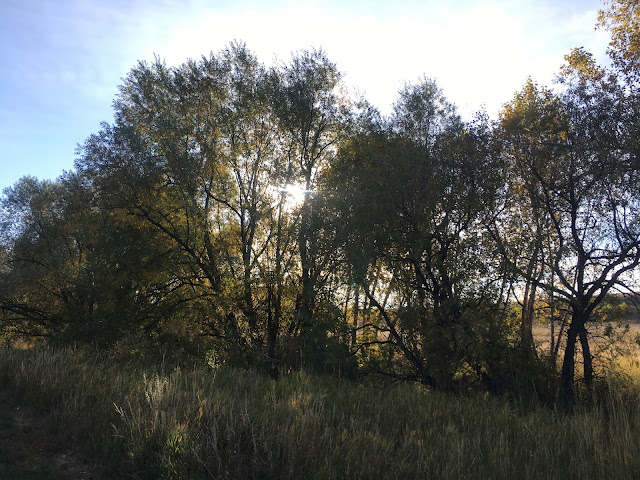 About mile 4 was when we ran by the finish line and continued to head east for the back part of the course. I didn't realize that the back part was where the 5k and 10k runners had to go. I had told A the course was flat, so when I realized the biggest hill was on her course I figured she'd be mad.

However, I saw her when she was 2-2.5 miles in and heading in to the finish. She looked really happy! 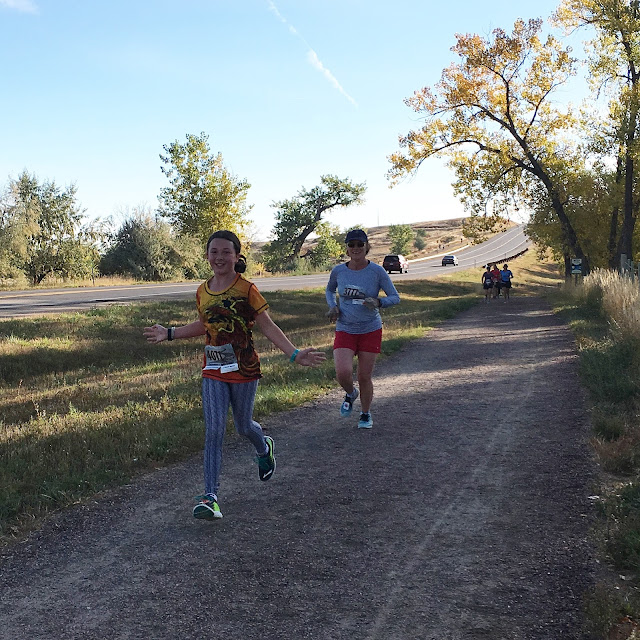 I walked up most of the hill, enjoyed the flat on the plateau, and then the small switchback section down the backside, where there was another aid station. This section of the trail was really pretty, and I didn't remember it at all from when I ran it in 2013. About mile 7 I figured I should take some Honey Stinger chews, only to realize I must have left them in the car. OH NO! Luckily, there was an aid station soon after and they had jelly beans. Can't believe I actually forgot my fuel, first time ever!

I ran pretty decent until we turned around, and then I was pretty much done (not good, I still had like 4 miles to go). There was a lot more walking than I would have liked, and my legs were feeling pretty fatigued (I had gone to barre classes every day for a month, so it wasn't really a surprise). Took all my pictures from this section on the way back since I was walking more. 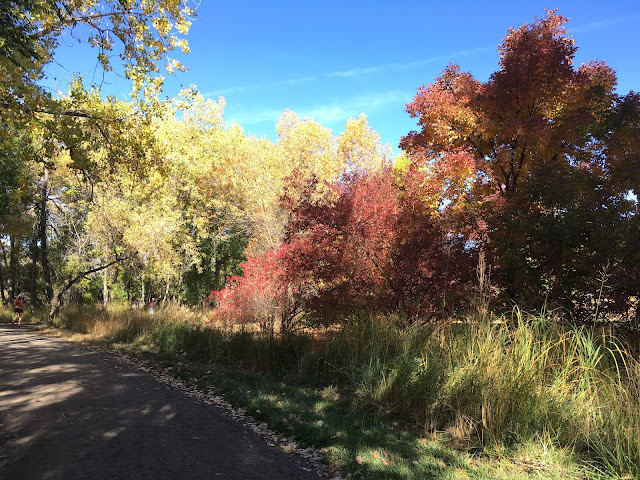 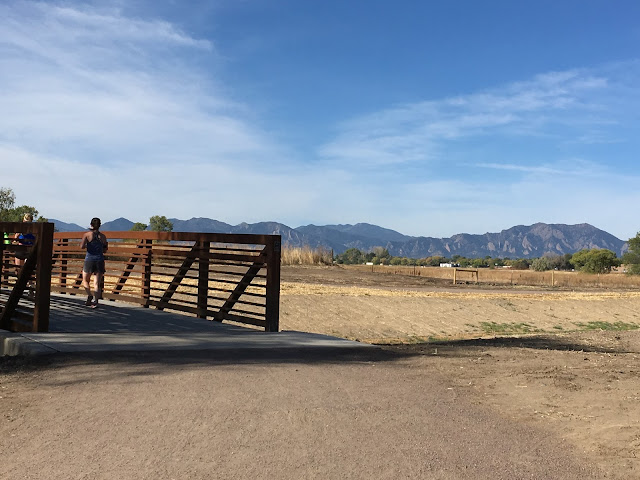 I did finish fairly strong and was really pleased to go under 2:30 for the first time in ages.

A was at the finish line handing out medals for the kids' race (by the way, they nearly trampled me, lol). I made a quick stop to the bathroom and then went to the finish line party to hang out. There was a special awards ceremony for the season pass holders. I was surprised and super excited to get a custom growler, 6 pack of beer and medal for completing the half marathon distance at all 9 races of the season.
A got third in her age group, although only overall finishers received awards at this race.

We stuck around for a bit talking with people and ate a quick lunch before we had to head out.