The Palmer Lake half marathon is a part of the Endurance Race Series that I am an ambassador for (code ERSRACE3 saves 15% on all races, all distances, FYI). I hadn't run this race before, so I was looking forward to it. The forecast was for sun and warm temperatures, so I was a little sad to have an 8 am start.


We left the house just before 6, with A planning on volunteering with Eric. (I tried to talk her into running the 10, she has earned a jillion free races, but she said she didn't want to be tired for her soccer game that afternoon). Anyway, the start of the race was at Palmer Lake, the same place we had done our 24 hour race back in April. We parked and walked over to the start line so I could pick up my packet. I ran into Heather and Eric in the parking lot while I was getting all my gear ready, so we all walked together over to the start. I used the bathroom, and before I knew it, it was time to go. 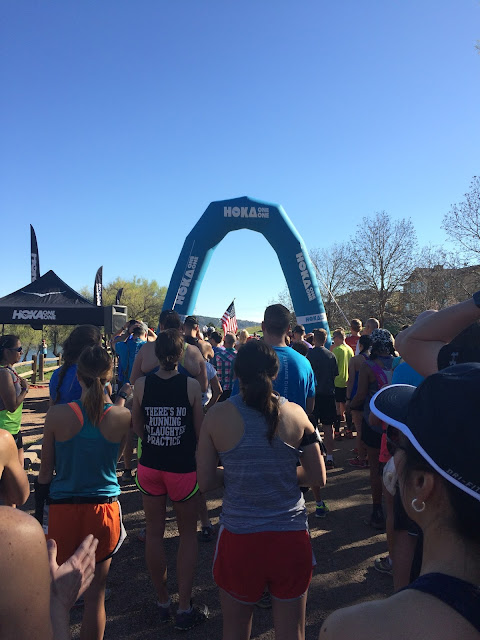 We started 7 minutes late (arg!) and did a counter-clockwise loop around the lack, then headed south on the Santa Fe trail towards Colorado Springs.
I had run this trail before, during the American Discovery trail marathon in 2014. I knew it was a gradual downhill on the way out (which of course meant a gradual uphill on the way back). The trail is a wide, dirt road. With ZERO shade. It was already hot by the time we headed out. I hadn't really looked to see where the aid stations were, so I was wearing my hydration pack. We've had a lot of rain recently, and the trail was mostly dry, although there were a few muddy sections.

For some reason I thought the 10k would be running this section, so I was surprised to not see anyone. I obviously realized that they had to have been running the back half of the course. The only aid station was at the turn around, about 3.5 miles out. That's about when I started walking. It was a combination of fatigue and the heat. Took a gel at mile 4, and it exploded when I opened it. That was fun having sticky GU all over my hands. In general, I did not love the section running back to the lake.
There was an aid station on the north side of the lake, I filled up and decided I was going to have to ditch my vest at the start area. It was so hot on my back! As I was coming into the start area, the half marathon winner was heading into the finish (I was barely past mile 7, for perspective). Eric was directing runners and I gave him my pack, apologized for it being sweaty, and asked if he would give it to A. I had grabbed one of the bottles out so I would still have fluids and immediately felt better.

We ran up a hill to get onto the back half of the course, a small section I hadn't run before. Then we had to cross the road, hit another aid station (about mile 8), and then we entered the Greenland Open Space for more super exposed trails.
The turn around was at the mile 10 marker, at the top of the switchbacks I had run during my first ultra.
There, I overheard people complaining about the lack of aid stations and the fact they weren't able to get their Pandora to work. I enjoyed the downhill of the switchbacks, and then it was a pretty brutal and hot suffer-fest from about mile 11 on. I stuck with two ladies for the last half mile or so. However, they had kick left, and passed me with a tenth of a mile to go.

Collected my medal and then headed off to find my beer. I was one of the later finishers, and it was, as always, appreciated that there was beer and food left! I wasn't super hungry, but I still shared half a burger with A, had a beer, and grabbed a bag of chips for the road.

Did some pictures with Maureen, Heather and Eric, and then headed out to go to A's soccer game.
Thoughts: