Tuesday (16,901 steps) - It was snowing when I went to bed. I figured I'd pull out clothes for running outside and if it looked ok I'd do my miles there. There was more snow than I expected so I opted to just do my 4 on the treadmill. Not great, not awful. Another episode of "Breaking Bad." Actually did an upper body video after work. Crazy. Made a new recipe for dinner, a Mexican casserole. Made some substitutions, and it was DELICIOUS. And pretty healthy! 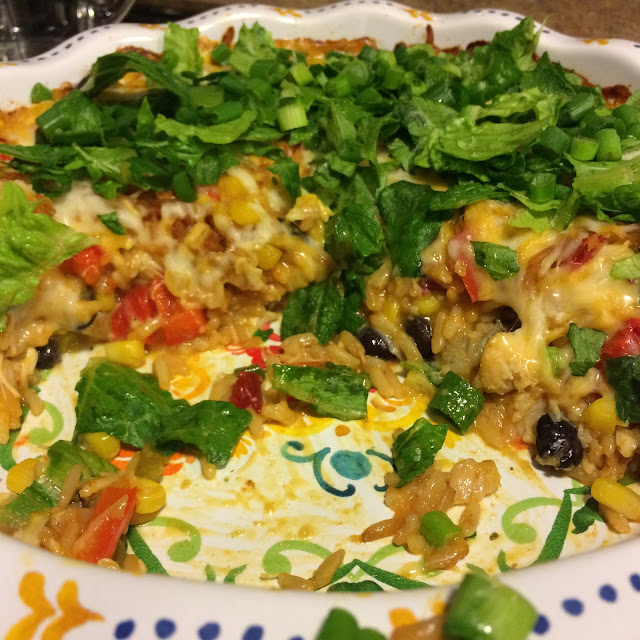 Wednesday (22,115 steps) - Another run, another struggle. Seriously, why does running never get any easier?? Thankfully, I only had 4 miles on  schedule. 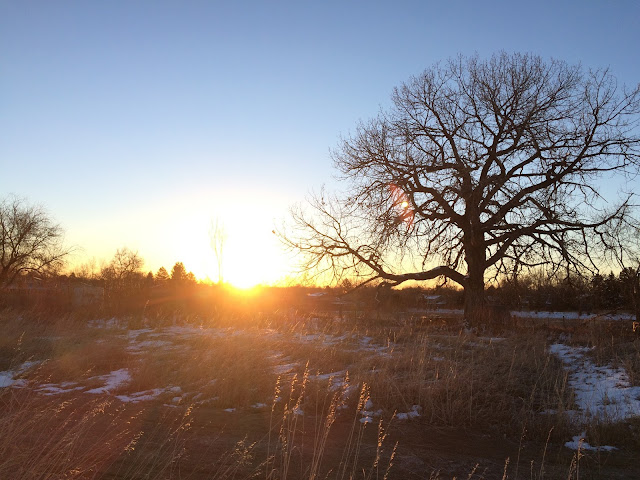 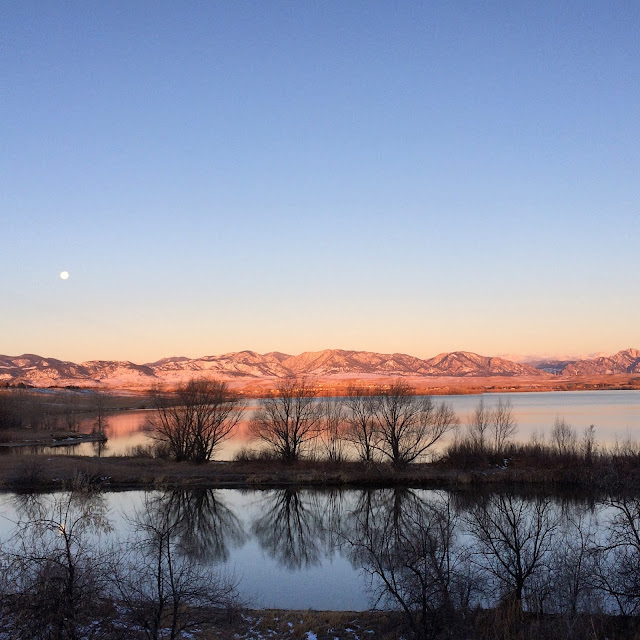 Did a quick yoga/stretching video in hopes of loosening up. Run club after work - a super fun evening with special guests from Trans Rockies. It was a late night, after all the videos, elite panel and giveaways, we didn't get out until almost 9! On a school night!
Thursday (21,930 steps) - A pretty darn chilly 6 miles before work. I actually kept my gloves on the whole time, which is rare. Relatively fast, for me. 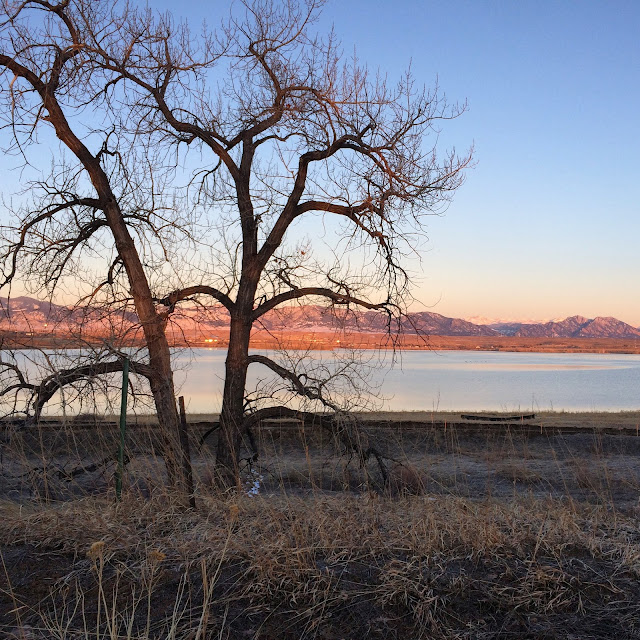 Friday (14,400 steps) - Rest day!! Went for a walk during lunch and saw this:
Did a quick yoga video. After work, more cookie booth excitement. So happy to almost be done with this.
Saturday (46,327 steps) - Long run day with Runners Edge. 20 miles in Greenwood Village, with some miles at Cherry Creek State Park. Unseasonably WARM, it was over 70 when we finished. Originally we were supposed to have a cookie booth, but it was cancelled because the first shift barely sold any. 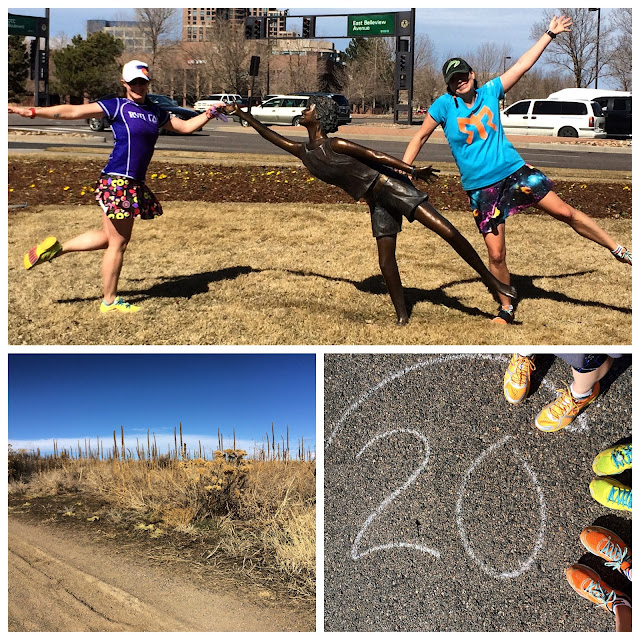 I was debating if I was going to post about this, and after thinking about it for a few days, I think I will. In the INKnBURN ambassador Facebook group (on Saturday afternoon) we were told that people who would not be renewed in the ambassador program were going to be notified via email. I was completely blind-sighted to receive one of the "too bad, so sad" emails. 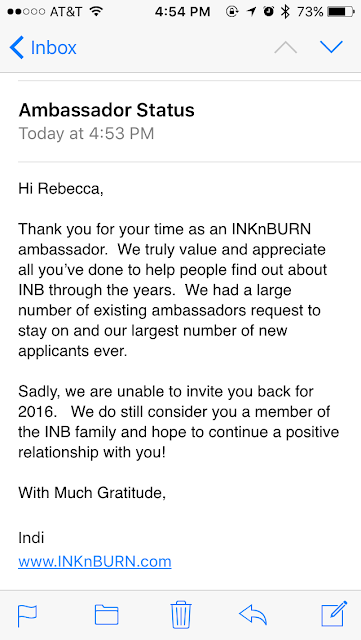 What?? I was added to the INKnBURN team in January of 2013, and have spent the last three years raving about them. They make such unique designs! See?? I'm wearing them all! During training! At races! At work! For casual wear! I am sharing pictures across Instagram, Twitter and Facebook! I am "sharing" all your posts and trying to get people to buy your athletic clothes! I was active in the Facebook group and available for questions, help, etc. So again, getting a completely impersonal email stating "we had more applicants than ever, sorry" was a slap in the face. I headed to the Facebook group to say goodbye and had already been booted out... Wow. Harsh.

This may all be construed as bashing the company, but I promise it's not. It's just a disappointing way for a three year relationship to end. When I first was asked on board, there were less than a dozen of us, and only two of the original members remain (those that left were by their choice, not "cut" by the company). I'm not exactly sure who else was asked to leave, but the others I received messages from had only been in the program for six months.

Sadly, they have become "big business." And while that may be good for THEIR bottom line, it's not good for mine. I'll probably save a ton of money on running clothes now (well, except for skirts of course). There is relief in all this as I no longer have to take billions of pictures in their gear.
Sunday (15,670 steps) - Did NOT sleep well. Had hoped to get a solid 8 hours in, and of course I woke up before 5. Left the house at 8:30 to head down to Lakewood for the Westside Best Side Cross Country race. It was already SO sunny out. How can it be so warm in February??? I was concerned about how my legs would feel after Saturday's long run. Warmed up with a beer from Crazy Mountain (our new MUT team sponsor) and then we started right at 10. I've never run cross country, so the whole thing was mildly confusing. Luckily, I am SLOW, so I was able to follow people and didn't have to worry about getting lost. A decided to try to keep up with Jen (BAD IDEA), and bonked after about 2 minutes (her first 1/4 mile was at a sub 6 pace). I was running ok, but A was struggling, so I stuck with her. She took a TON of walk breaks, and with about 3/4 of a mile to go, she told me to just go on without her. I actually felt pretty great that last mile and managed to sprint past a woman right at the end (at a sub 7 pace, lol). Fun morning hanging out with my awesome Roost teammates. 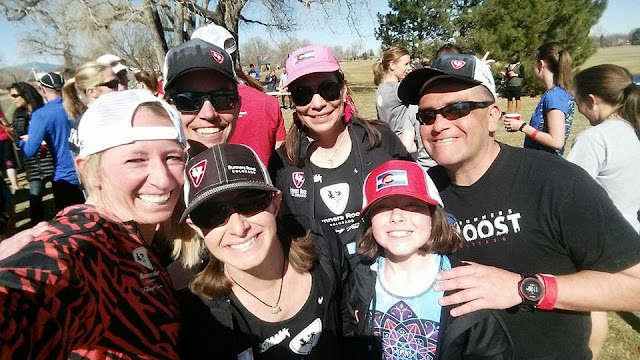 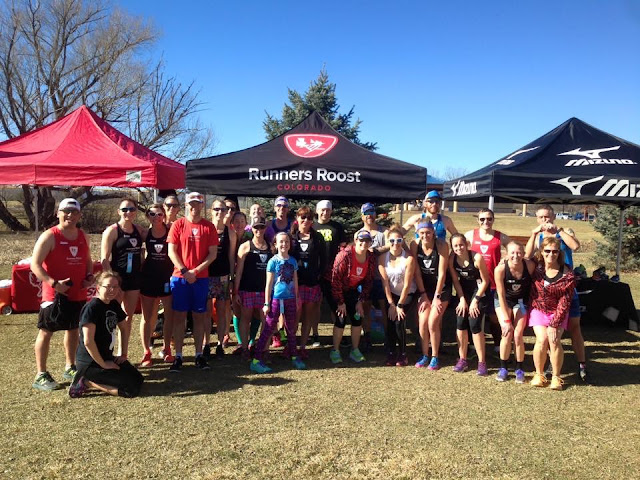 We went out to lunch with Maureen, Heather and Dan, picked up some stuff at Roost Lakewood and then headed home. Ended up having a cookie booth in the afternoon. Packaged up a dozen INKnBURN items I sold while Watching Walking Dead and Talking Dead, in bed fairly early.
Monday (21,255 steps) - Dragged myself out of bed for a totally uninspired five miles. The wind was HORRIBLE yet again. I jumped on the single track for a bit on the way back, and that part was nice. 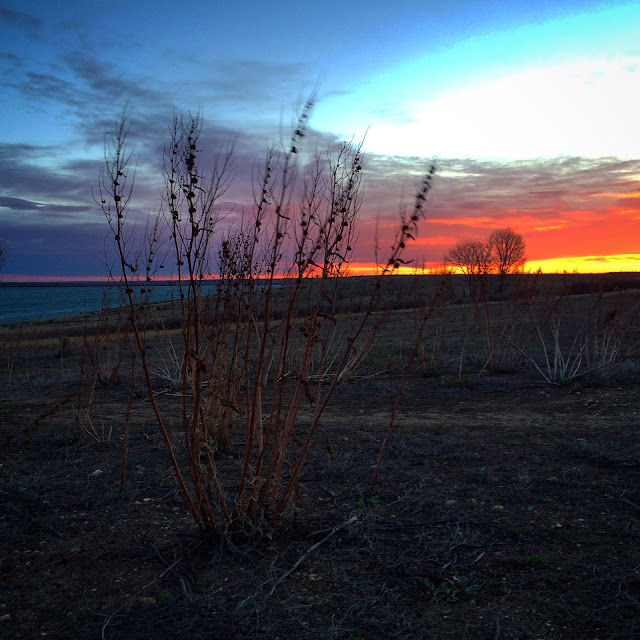 Zero recollection of the rest of the evening. Went to Tokyo Joe's for dinner.