Tuesday (25,266 steps) - With a forecast of snow mid week, I wanted to get out and run while I had the chance. I got up really early and did eight miles. It was actually a really great run, felt good the entire time. Yay!!! 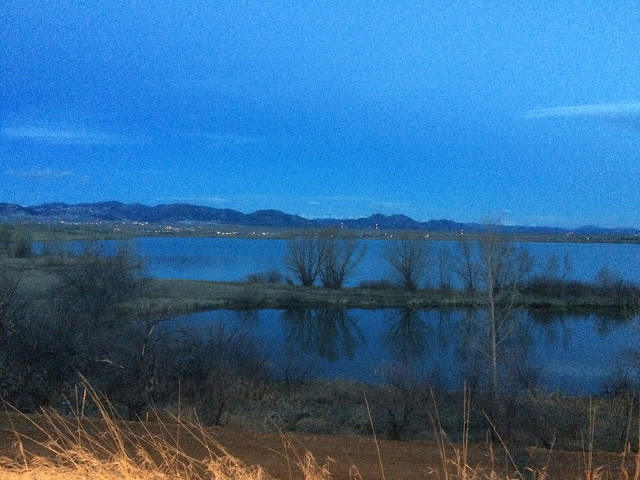 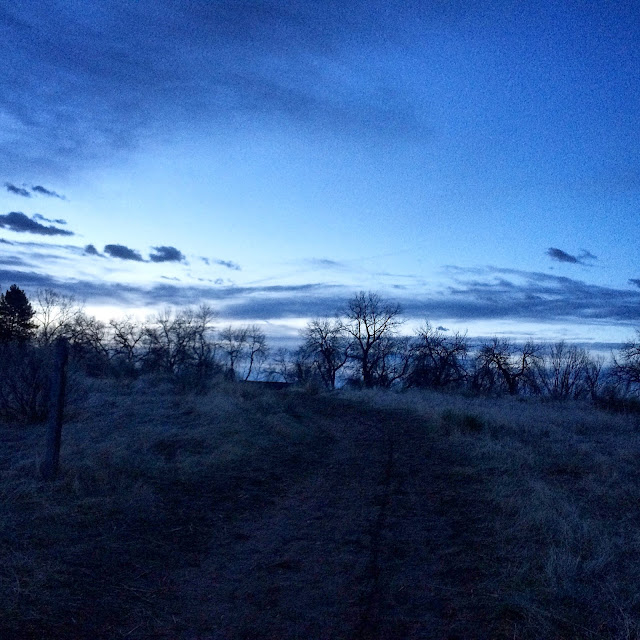 And I even remembered to do some stretching when I was done. Archery and Tokyo Joe's after work. 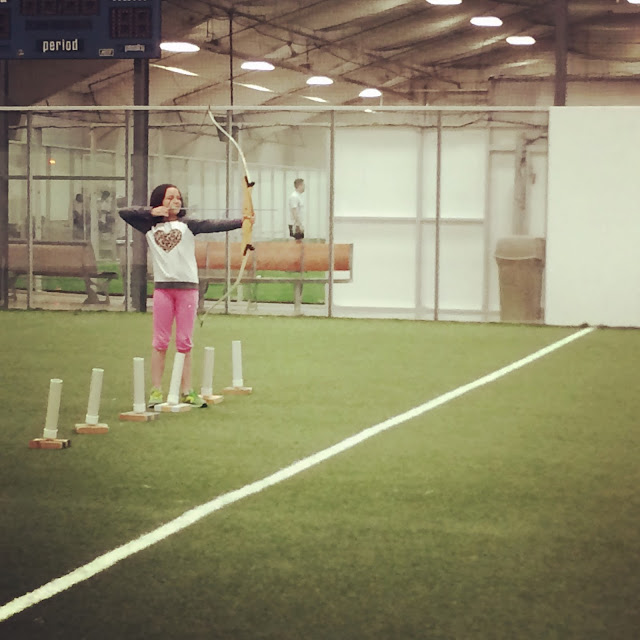 Wednesday (15,569 steps) - Took a rest day. Did a lower body video instead. I vaguely remember this being one of my favorite videos, back when I actually did them regularly. I went upstairs to get ready for work and A commented that it looked pretty bad outside. So I sent her out to shovel (I'm the best mom ever!) - she came back in and said the wind was making it impossible to scrape the car off and shovel because as soon as she would finish she would have to start over. Excellent. I had received emails that her normal child care was canceled due to weather, and I kept checking to see if we would have a delayed start or snow day at work. No such luck. Stopped at Dunkin Donuts before dropping A off at her friend's house and I went to work. The drive was terrifying. The wind and snow was icing over all the stoplights, so there was no way to know if a light was red or green until you were practically through the intersections. Accidents galore. The weather obviously took a turn for the worse, and it was full blown blizzard by the time I got to the office. Less than half the support staff showed up and only a couple attorneys. By 11 am, the office manager sent out an email that we would be closing at 2. Great. Only it was getting worse NOW... After some negotiating, they closed the office at about 12:15. I had some work to finish so I didn't get to head out until closer to 1. The roads were a disaster and it was still snowing pretty good. Picked up A (I had to circle the block and stop in the middle of the street because there was too much snow to pull over) and headed home. The company the HOA hired only plows once, and I had to stop in the middle of the lot to shovel my parking space out. Oh, and did I mention that the heavy snow had caused a tree to fall on my house (PS - a week later, and it is still there. THANK GOODNESS I PAY THE HOA TO TAKE CARE OF THESE THINGS). A and I vegged the remainder of the day.
Thursday (29,669 steps) - Obviously, I could not run outside. I didn't measure until morning, and even then, we had over 20". The forecast was for 3-6". That's one thing that is super fun about Colorado weather... you never know what you're really going to end up with. Anyway, got in a 10ish super slow miles done in the basement inferno, finishing up the first season of "Better Call Saul." 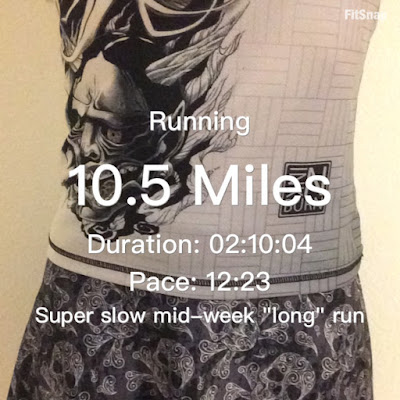 Remembered to stretch again!
Since it's spring break, traffic was light going to work and the roads were in really decent shape. A had her free trial class at Tigar Gymnastics at 7:00, so we stopped to pick up a veggie tray to snack on before she went so we didn't die of starvation. 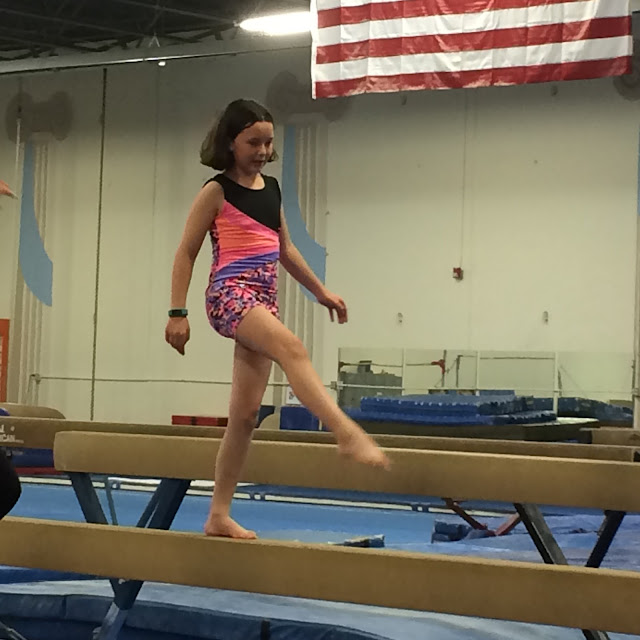 By the time we got home and ate dinner it was almost 8:30. This is going to take some getting used to.
Friday (16,469 steps) - Another rest day!! A was spending the night at a friend's house, so I picked up pho on my way home from work, binge watched the first three episodes of season 2 of "Better Call Saul" and was in bed by 10. Party animal!
Saturday (44,251 steps) - Due to the blizzard at the beginning of the week and more snow in the forecast Friday-Saturday, our long run was moved to Wash Park in Denver, as the inner loop is plowed pretty regularly. Sadly, Heather is still injured, so I was hoping I wasn't going to be alone, with 22 miles on schedule. It was freaking COLD (24 degrees), WINDY, and lightly snowing. Oh, and overcast. No sun to even pretend to warm up the day. Because of the weather and the 2.5ish mile loops we would be doing our pace groups got all messed up. I ended up running with my Roost teammate (and former co INKnBURN ambassador), Lisa. The first 13-15 miles weren't really that bad. Every time we ran north it was FREEZING. The wind was hitting us directly in the face and even though I had hand warmers, my hands would get super cold. Then we would loop around and I would contemplate taking off my hoodie. Lather, rinse, repeat until I got 19 miles in and decided that was plenty. 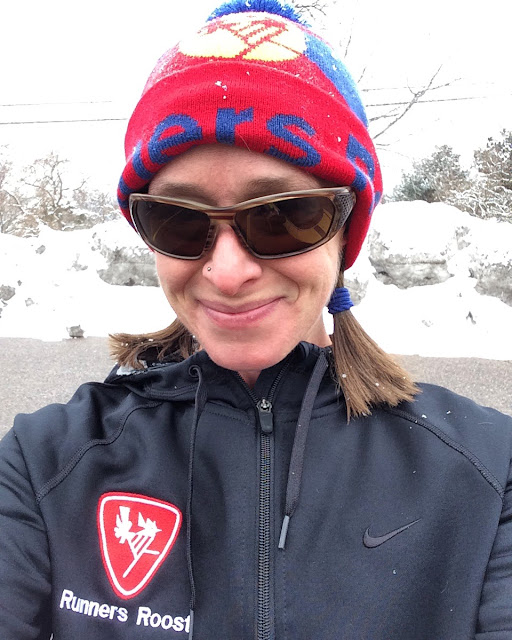 I was OVER this run, plus, I needed top pick up A at her friend's house. After I showered we went to Cheesecake Factory (I'm not going to deprive myself forever!), and then stopped at a dance store to get A a new leotard. Some TV time before heading over to Runner's Roost in Lakewood for the Brewery Running Series event. Such a fun night! There was a run at the start, which I skipped, because hello, I ran plenty in the morning. A went with Maureen to walk Colfax and I picked up some gear and started on my beer sampling. We ended up staying at the store until about 8:30, and Maureen and I registered for four of the races. 11 a.m. 5K's in July? Sure! Should be a blast. Didn't end up eating dinner until almost 10, then immediately to bed.
Sunday (32,141 steps) - First Endurance Race Series half marathon, Westminster Trail, of the year!! (Recap to follow). 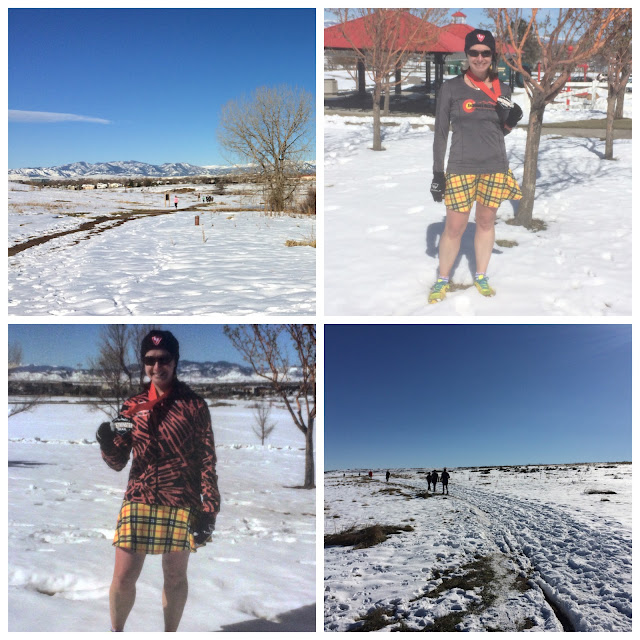 Since it was Easter, A decided she didn't want to have breakfast/lunch at the race (even though it was freeee), so we went to Sweet Tomatoes. I was freezing and smelled pretty sketchy, but we had a great brunch and I didn't overeat. Watched some TV/napped on the couch. We hadn't been grocery shopping in a while so we went to Olive Garden for dinner. They were actually pretty busy. Do people not cook Easter dinner anymore? Did a yoga video with A. In bed pretty early. LONG WEEKEND.
Monday (15,956 steps) - Rest day, so I did an upper body video. I had a delusion that I would get up early enough to do a second video, a lower body video as well, but LOL. I was way too tired. After work we had to stop by the store to get dinner. A wanted to do a quick run around the neighborhood, so we did a mile loop. Legs actually felt fine, so that was nice. Pilates video after dinner. 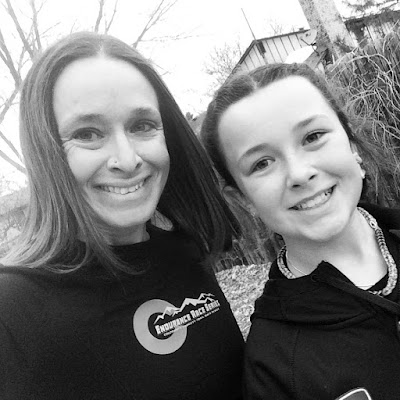