Saturday, August 1
Estes Park, CO
Half Marathon #135
Colorado Half # 68
Weather - Perfect
This race was selected because it was planned around the 100th anniversary of Rocky Mountain National Park. Now, the Rocky Mountain half did not take place within the park, but it was still a gorgeous race.
I had to get up at the obscene hour of 3:37 for this race. And that was only allowing about 5 minutes to get dressed and leave the house and a 4 minutes stop at 7-11 for coffee for the drive up. The drive to Estes Park is pretty long - about an hour and a half, and the race began at 6:00. So I was driving on the windy backroads in pitch blackness. Obviously there was not much traffic, and the people that WERE on the road were headed the same place I was. I parked the car at about 5:15, just in time to walk the third of a mile or so to the start line to get my bib. When I picked that up, I was surprised to hear that this was a cupless race (I mean, I'm sure the informational email said that, I just don't read them anymore. My bad.). Luckily, I was given a hydrapouch. Then I asked the volunteer about whether they were enforcing the fee in the lot I parked in, and he thought they probably were. SO. I used the bathroom, walked BACK to the car, then drove about 2 miles to the other side of the Fairgrounds and then walked BACK to the start area. Made it with about 2 minutes to spare.
This may have been the longest I have gone without running a half since I first started running them in 2010 (close to 2 months). I also have not been running. So... I optimistically lined up with the 2:20 corral. (LOLOLOLOL). The race started on time and off we went. It was a bit brisk, but honestly, for August, I could not have asked for better conditions. And the 6:00 start time was SO appreciated.
We headed out on the road and we were immediately hit with the first of MANY hills. I didn't walk up that first one. YAY! Managed to run all the way to the first aid station without walking (around mile 2). There was no signage warning of the stop and I had NEVER seen a water station like this. I wish I'd had the time to get a picture - it looked like PVC piping with just water spouts? I nearly caused a traffic jam because I didn't realize that was the only chance to get water. Ooops. I moved over to the side of the path to get a picture of the "blue moon" - right as the sunlight was hitting it - pretty cool. 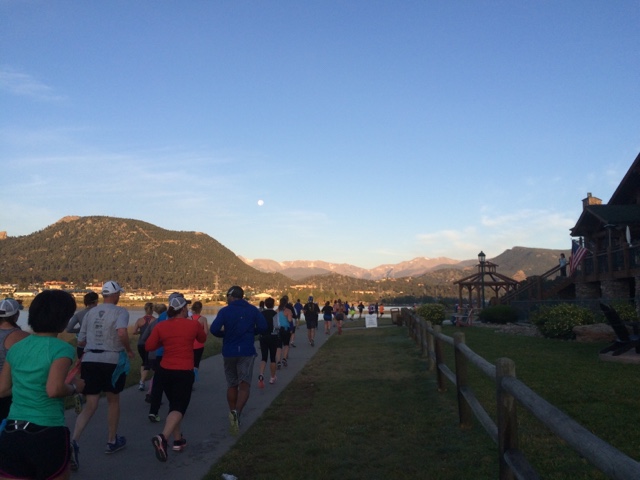 Miles 3-4 went by fairly decent, but then the bulk of the climbing started. The saving grace for me was that the sun wasn't beating down on us yet. Thanks to the early start and the mountains, the weather remained cool. 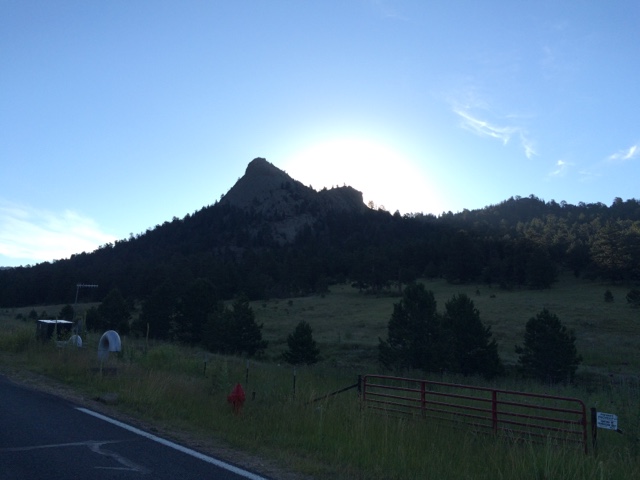 I already can't remember most of what happened during this race. The course was very well marked with mile marker flags at every mile. Aid stations were spaced well - around every 2 miles. After the first one there was water and nuun and food/gels.
I do remember that there was a lot more climbing than I expected (almost 800 feet over the whole course) and that the views were amazing. I also remember that once I got to mile 6 or so I was pretty much done. My legs were very tired and this honestly felt like one of the more difficult races I have ever done.
﻿ 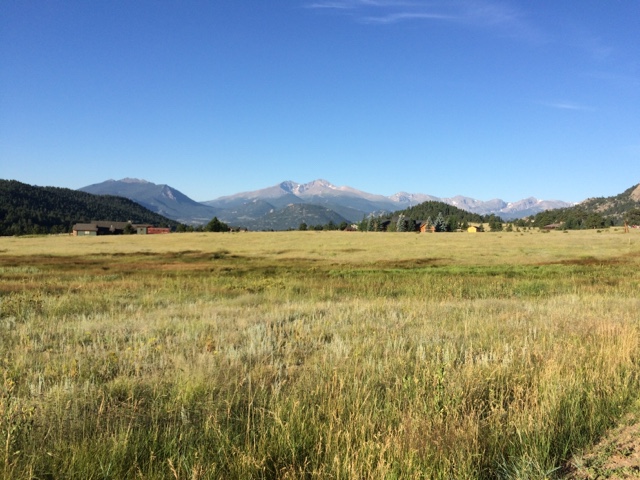 Somewhere after mile 9 there was finally some downhill. I was moving better, but due to the fatigue in my legs it certainly wasn't at any sort of blistering pace. Disappointing, but not unexpected.
I was hoping I was going to be able to come in under 2:30 (my how far I've fallen), but I could not really seem to get around the 2:30 pacers. We ran by the famous Stanley Hotel at mile 12 - very cool! 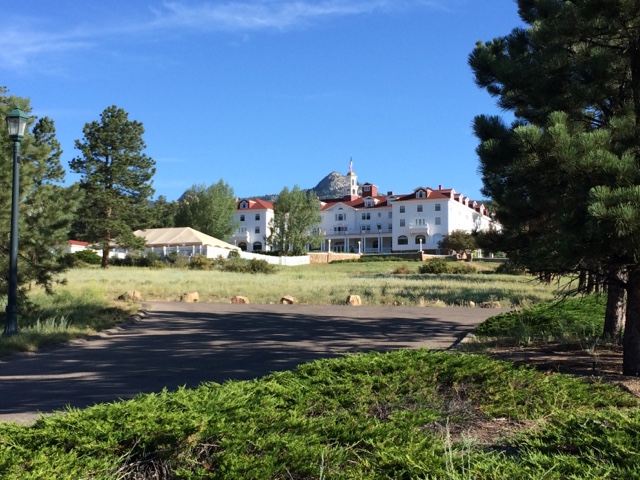 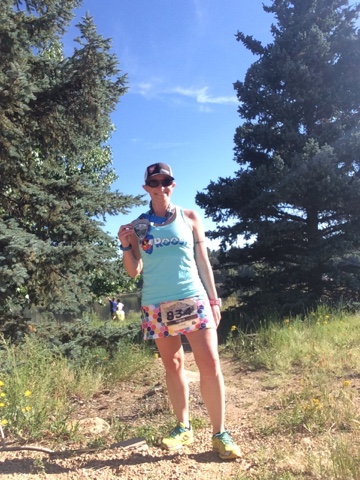 Briefly chatted with my friend Cheryll and then headed back to the car for the long drive back.