Fairplay, CO
Saturday, July 11
Ultra Marathon #14
Weather - Chilly at start, perfect
So the journey began immediately after I got off work on Friday. Since I have apparently lost the ability to read things when I signed up, I had missed that there was a mandatory meeting the night before, at 7:00 pm. So I had initially thought I would maybe just drive up in the morning for the race, but now I was scrambling to find somewhere to stay for the night since it's a two hour drive.
Elizabeth suggested I try Airbnb for an inexpensive place since I literally just needed a bed. I reserved a place that was only about 5 minutes from the start line, so it worked out nicely.
Anyway, traffic was wretched and it took over two hours to get there and I arrived late at the meeting. I picked up my packet, ate some pasta, and then headed to my Airbnb. I was in bed by 8:45, but I did not sleep well.
Race Day
Up VERY early. I was up before 5, long enough to get dressed and head to the start area. I had forgotten my wall charger for my phone so I wanted to sit in my car for a bit to get it as close to fully charged as possible. It was in the upper 30's, and I was wearing a long sleeve YMX top (like I did in Utah) under my Runner's Roost singlet and then had my long sleeve 1/4 zip on over that. I knew I would get warm quick, but considering that if everything went well I would be out in the dark I figured it was best if I had the long sleeve just in case.
Headed over to the start line at about 5:30. Checked in and then cycled through the bathroom line about 3 times. My stomach felt off. I talked to a few teammates and then at 6 we were off...
Since I was obviously undertrained not trained at all for this nonsense the plan was to just keep moving. I mean, it was "only" 50 miles.
Walked up the hill and then we were on dirt roads until the first aid station. It was a gradual uphill and I settled into where I would be the entire race - the very very back. I was tired, my stomach was angry and this felt exceptionally hard. There were a few downhill sections and for a while there were actually two people behind me. I had to stop around mile 6 off the side of the trail to "do my business" but then I felt a tad better. 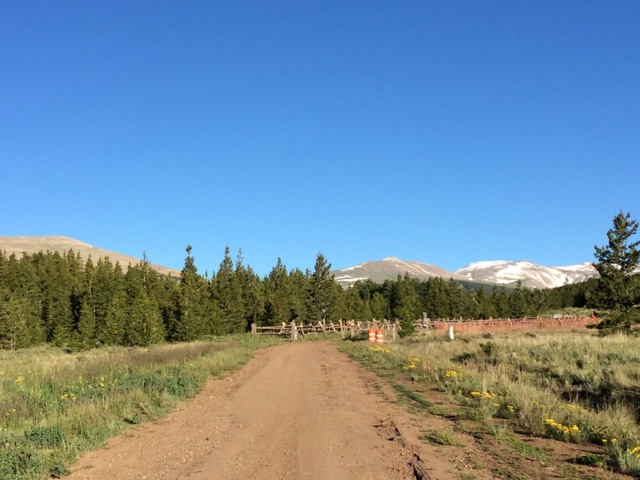 At the first aid station I took a shot of whiskey. Which is crazy because the very thought of whiskey gives me instant gag reflex. There was about another mile on the road, and then we crossed and finally were headed onto the trail. I was excited for this part! 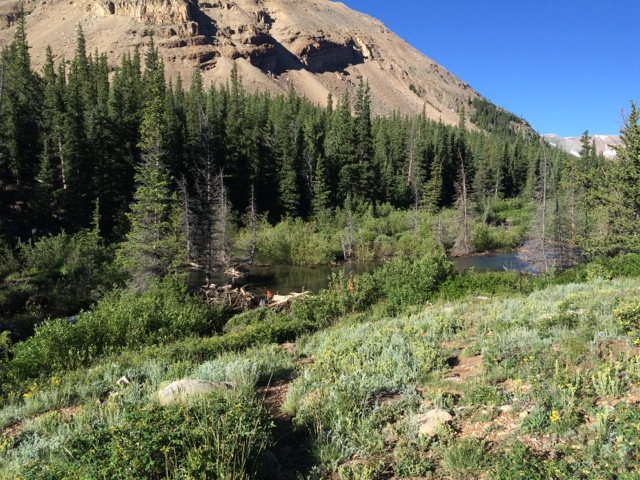 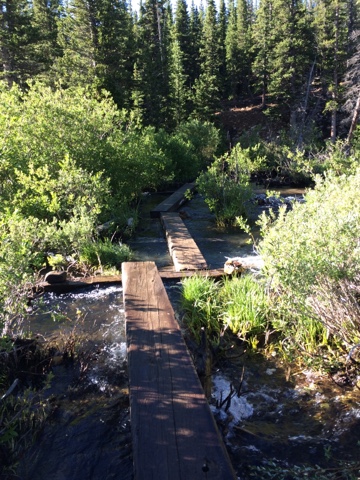 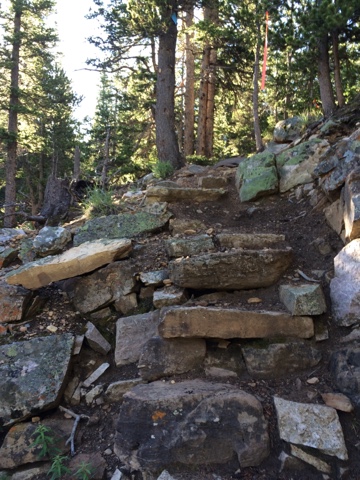 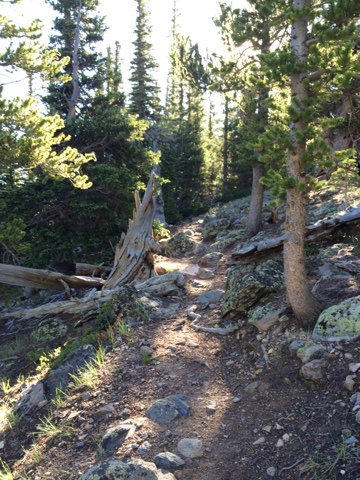 This section was pretty runnable. I ran into Sherpa John (the race director) in this section and he asked me if I was having fun. I said yes!! He warned me the "rock garden" was ahead... what does that mean?
﻿ 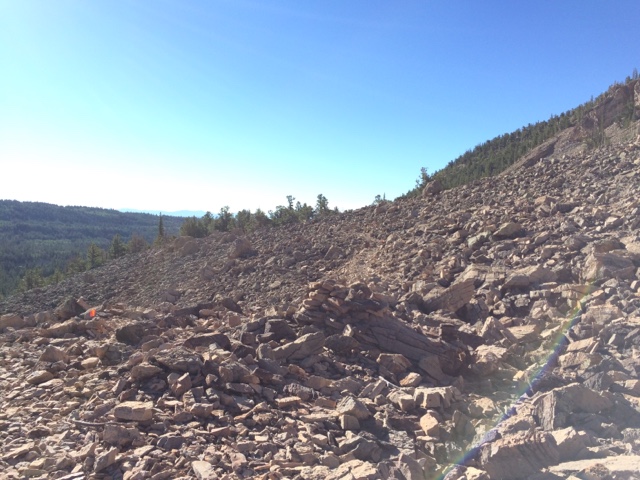 Oh. Rocks. Forever. So this part was NOT my favorite. This is also when the climbing started. There were sections that were REALLY pretty. That did not change the fact that I was quickly dying. The climb and the altitude were getting to me and I was taking frequent breaks. I got passed by the only two people behind me on the first climb. 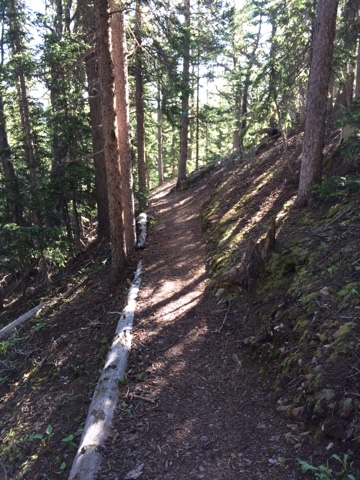 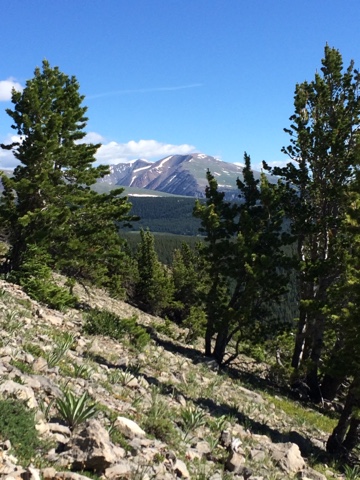 Once I actually got to the barren top of Sheep Mountain I was really having a hard time. I would guess that I was by now about a quarter mile behind the people who had passed me only a half mile or so earlier. I took a quick selfie... 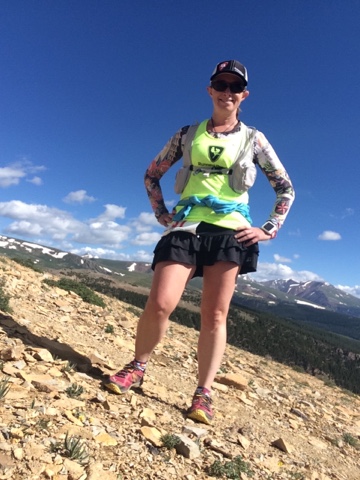 And then trudged on. Through more rocks. It seemed like it was NEVER going to end. Climb and false summit, and then climb again. I was checking my watch and it seemed like we had gained close to 3000 feet, most of that being after the first aid station.
﻿ 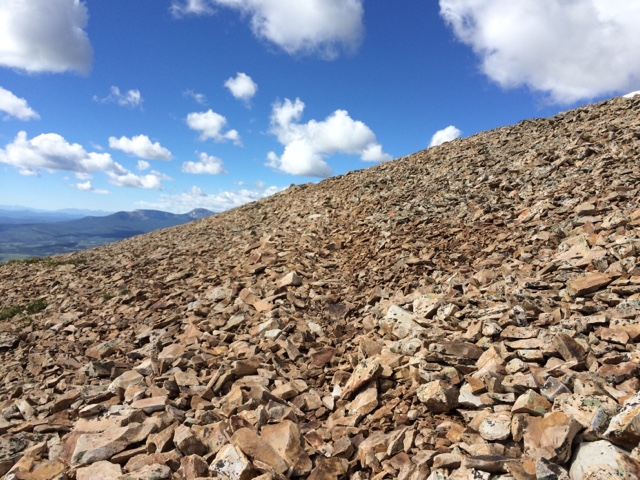 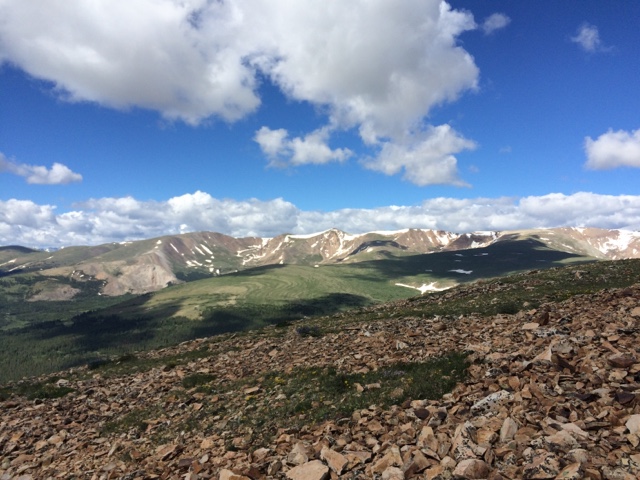 Then FINALLY it seemed I had made it to the high point. There was some downhill but it was a bit technical and I certainly wasn't blazing down the hill. Got to the next aid station. Took another shot of whiskey. This time it was cinnamon flavored so it wasn't as terrible.
﻿ 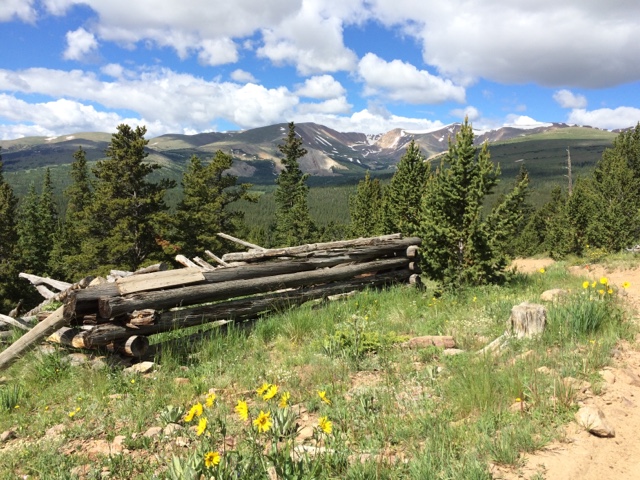 This section of the course was really pretty. And where the first of the water crossings were.
﻿ 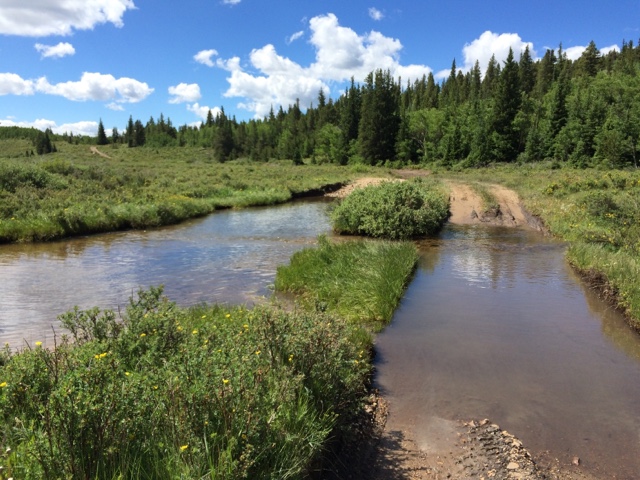 Thankfully, the course was very well marked as we were running through a field. The picture below shows a fairly well-defined trail, but not all sections were so clear. There were a TON of wildflowers, and I'm bummed that they don't really show up well in my photos.﻿ 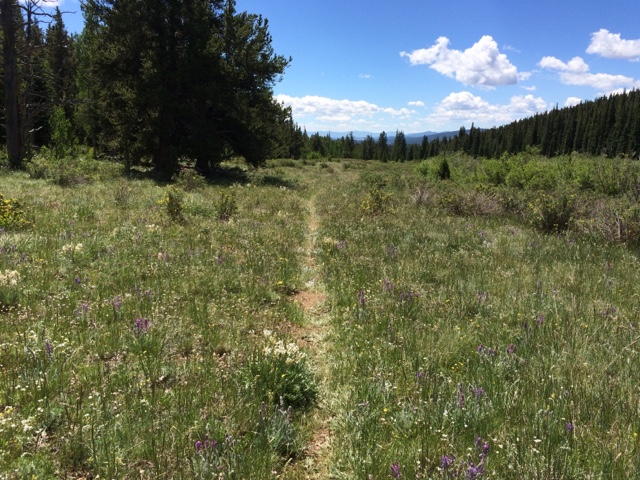 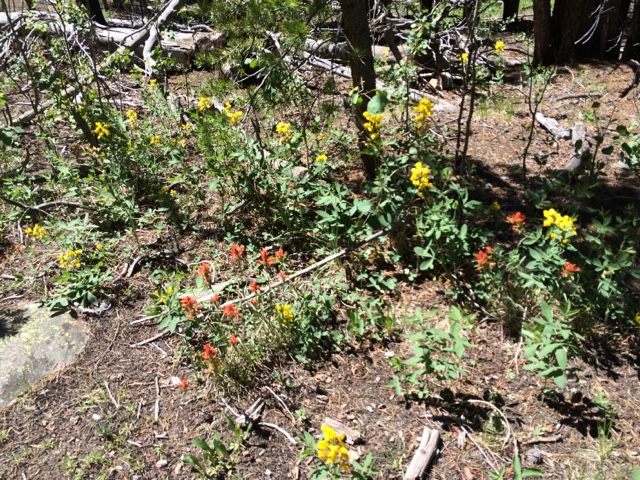 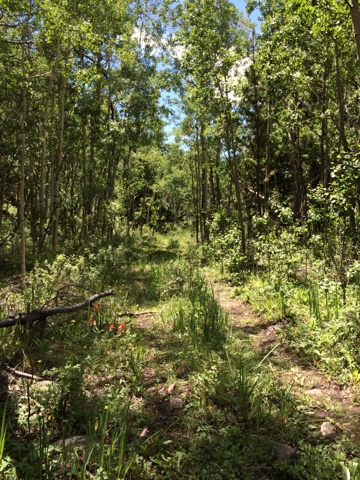 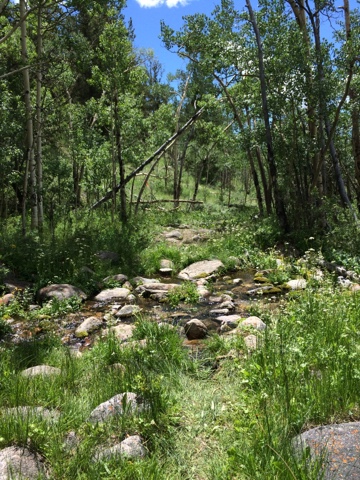 Around mile 20 I ran into a guy who said he had gotten lost. I stupidly didn't look around and took his word for where NOT to go and ended up going about a half mile out of my way. The distance wasn't the worst part, it was the time trying to get enough phone service to get on the internet to look at the race manual. Womp. By this point I was already thinking it was going to be very tough to hit the time limit. We stuck together only for about 15 minutes. He hung back and I headed into where the next aid station should be and I never saw him again.
﻿ 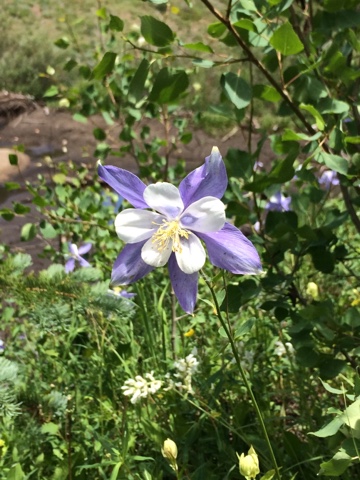 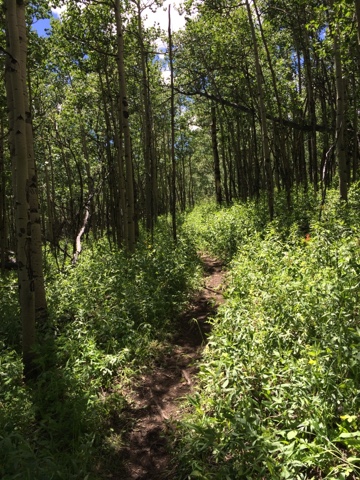 I was pretty tired and hungry when I got to this aid station, but there wasn't a great selection of food. I was pretty happy to hear that the next section was only about 4 miles and it was all downhill on paved road. I actually did pretty decent on this section and I thought I was doing well and making up some time. Thanks to 1). the course measuring long and 2). me getting off course a bit, my watch measured close to 27 miles by the time I got to the next aid station. Somehow I had it in my head that the course only had 7,000 feet of climbing, and by now I had done about 4500. So I was thinking... if this measures close to 52 miles (which is what the manual said the true distance was), I thought I *might* be able to get it done under the time limit if I had already done 2/3 of the climbing.
﻿ 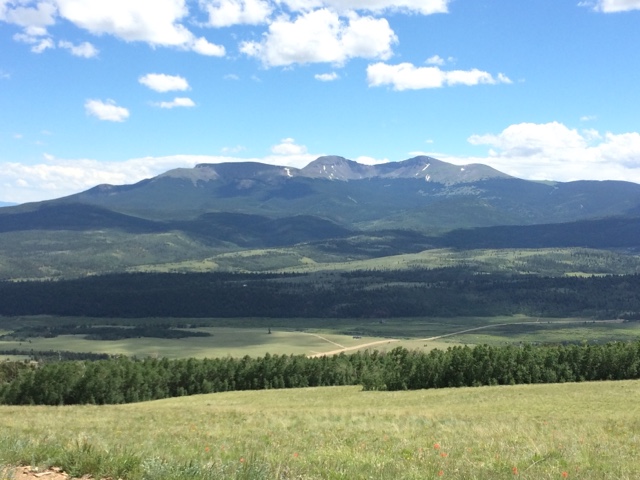 I grabbed an ice cream bar from the aid station, but my stomach did NOT like that so I ended up barely having any.
And by the way, I was completely WRONG about the climbing. The next section was called Breakneck Pass. PASS. So just by the name alone I should have realized that there was a lot of climbing. This section was even worst for me than the climb up Sheep Mountain. I had not seen anyone in hours on the course and I knew I was completely alone and that I was probably dead last. At the aid station they told me it was about 6 miles to the aid station, which the ﻿manual had at 32.75 miles.
I took about a thousand breaks (but no pictures) on this climbing section. At the pace I was moving and when I realized the course had 9,000 feet of climbing and that after I was done with THIS section that I would still have 3,000 (give or take) left to climb, I knew I was dropping. There was no way that I was going to be able to move fast enough.
I saw a volunteer on the side when my watch was about 33 miles and I almost lost my mind when he said it was still a mile to the aid station. AND THEN I found out that I "could" drop but the aid station was ATV access only so it would be a while, OR I could walk (downhill) to the next aid station 3+ miles away.
He said there would be beer (!!!) at the aid station and I could decide then. He told me I was, in fact, the last runner (others had already dropped), and he and another volunteer were walking with me and taking down the course markings.
Finally got to the aid station (34.3 on my watch) - and I did, indeed, get the promised beer. (And a damn good beer too!) 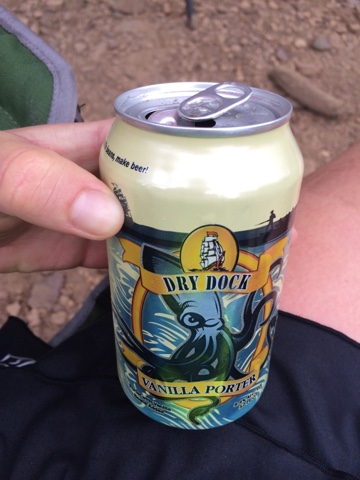 Minutes after arriving the wind picked up and it started pouring rain and hailing. So I clearly stopped at a good time. I was starting to get cold after I stopped moving and these amazing volunteers got me food and a poncho to stay warm. By the time the storm stopped, the ATV's had not yet left. I decided to walk down with another volunteer. Once I got to the next aid station, I was driven to the start/finish area and arrived sometime close to 7:30. HOURS after I had stopped.

I got a veggie burger and a beer and found out I had also won a $50 gift certificate to Runner's Roost! So, all was not lost.

I stayed around for a bit to eat and chat, and then started the drive back, not getting home until close to 10:00 pm.