Originally when I booked this trip, L and I were going to be doing a back to back. Then the other race arbitrarily changed the race date to a week later. We already had our flights booked so we were stuck with it. I started thinking & researching and since we were going to be there for so long, I decided to let A come along. I didn't, however, tell her about it. I packed her bag while she was at school, and she didn't start to realize anything was out of the ordinary until we were getting ready to leave.

Our flight was scheduled to depart at 6:55. When I booked almost 9 months ago it was a 3:40 flight. I wasn't looking forward to such a late arrival, but what can you do. I had printed out our boarding passes without really looking at them. Only as we were going through security did L notice that instead of a seat number, her ticket said "standby." Of course it did. What would a trip be without some sort of issue? So first thing we do is head to the Frontier customer service desk.

The woman was one of the most rude people I've dealt with. All we were asking was if L was really on standby and how at least 2 of the 3 of us could be sat together so that someone was with A. This woman found it necessary to go on and on and on about how if I would just pay the extra money for an upgraded ticket this wouldn't happen, or if I would select seats when purchasing, blah blah blah. None of which helped our current situation. After about 20 minutes of arguing, we finally got some seats together. Best part was that we got upgraded to stretch seating. NICE!! However... as soon as we got to the gate, we discovered our flight had been delayed.

I went to get dinner (Panda Express) and by the time we departed, it was almost 8:00. GRRR!

Once we were actually on the plane, time went by pretty fast. A watched a movie and then fell asleep. I watched a movie too, and before I knew it we were there! We landed at almost 1:00 in the morning. Then we still had to get off the plane and get to the rental counter. I only had a rental because of our original plans for doing two races in one weekend. Since it was already paid for I figured I might as well take it. We got the car and drove to Disney. We had some trouble finding the resort we were staying at - Disney All-Star Movies, and L had to call to get directions.

Then of course I got the guy at check in that just wanted to talk and talk and talk... L said she heard FIVE songs in the amount of time I was inside. By the time I got our keys and got to the room, it was almost 3:00 in the morning. Put A to bed, and by the time I got in bed it was already 3:15.

Woke up around 9:00. Really our only plans for the day were to hit up the expo and then to go to Animal Kingdom.

We headed out the door just after 10:00 and drove to the ESPN World of Sports to go to the expo. 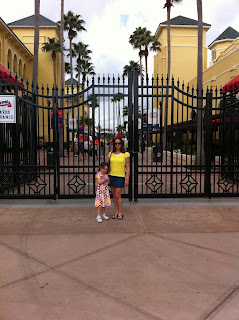 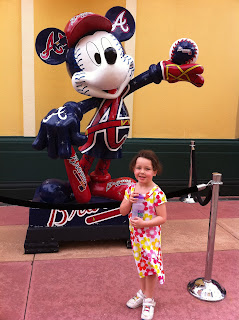 The expo was pure chaos. We decided to pick up our 5K bibs first. The lines were INSANE! Which made no sense since there were only 5,000 people running that. It should have gone a lot faster.  The line to pick up A's bib took maybe 10-15 minutes. Mine? Almost 20.

A was excited to have her race bag, and then wanted to just get out of there. Of course we still had to pick up our stuff for the half, and then we wanted to do a quick walk through of the expo. We were super excited to discover that Running Skirts had a new skirt to launch!!! We glanced at the "official merchandise" but it all seemed expensive and crowded, so we decided to get out of there and head to Animal Kingdom. 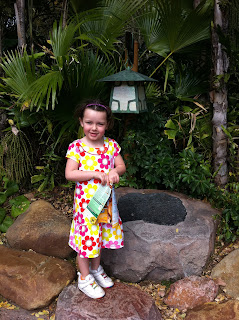 First thing on our minds was getting something to eat. We were absolutely starving! I was impressed that Disney seemed to have healthy options for lunch! Turkey sandwich and honeydew! Yum! 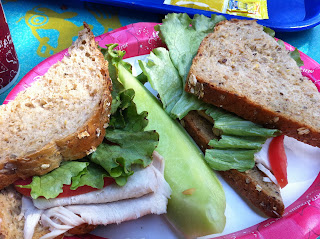 A was pretty excited about heading to Dinoland... 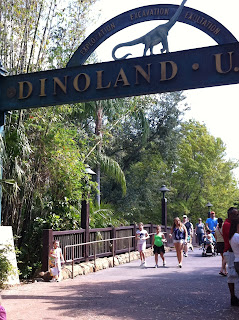 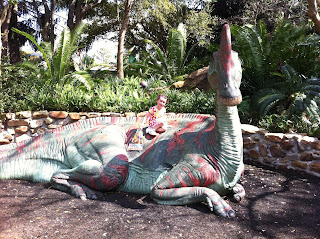 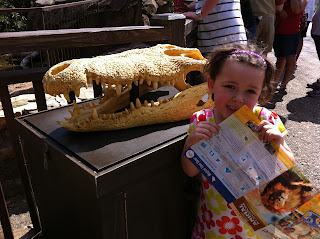 After Dinoland we decided that since it was "Animal Kingdom" that we should go in search of actually seeing some animals. We headed over to Asia, and that's when A saw the mountain for "Everest Expedition" (which she was insistent was the same as the Matterhorn) and wanted to go on it. Turns out she was a few inches too short. 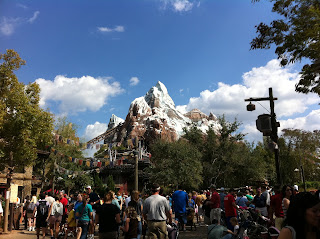 After a brief tantrum, we headed through Asia to the animal exhibits. 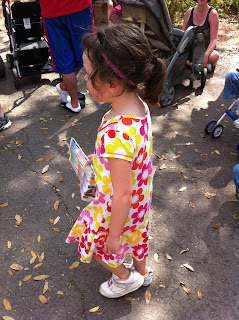 After the walk through Asia, we headed to Africa to go on the safari to see the elephants and the giraffes. 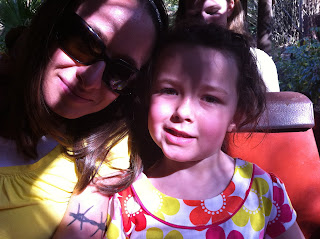 The safari ride is pretty cool, reminded me of the Wild Animal Park in San Diego. 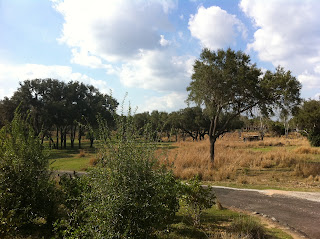 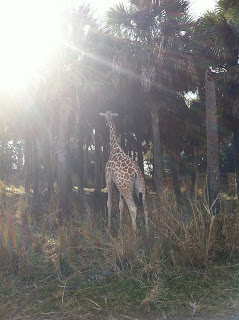 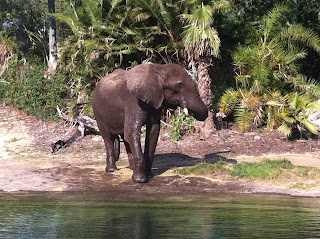 We weren't disappointed and saw all the animals - rhinos, giraffes, elephants, hippos, and an ostrich came within just a few feet of our truck!

After the safari we decided to start heading out. That's when we ran into the parade... 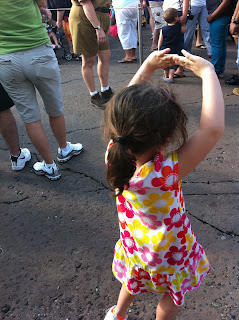 We knew we were going to have to get up ridiculously early, and we still needed to get back to the hotel and meet up with Giraffy, who had just arrived at the airport from California. We convinced A that we would take her swimming, which she was fine with. So we drove back to the hotel, met up with Giraffy. She headed to the expo to pick up her packet and me and L took A to the kiddie pool. After Giraffy was done, we met up for dinner at the food court of the hotel. We took advantage of their pasta special: 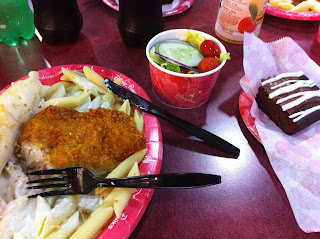 By the time we were done with dinner, it was already after 8:00. We still had to get everything ready for race day, and I was trying to get A to bed as soon as possible since we were going to have to get up at 4:30 am for the Royal Family 5K. We were all in bed by about 9:30. It had been a super long day!
at February 28, 2011 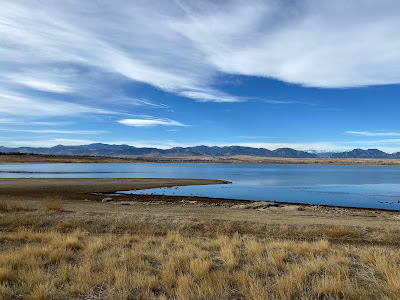