After my DNF in June at Black Hills, I was struggling a little bit (mentally). I kinda wanted to run another 100 mile race, but there was nothing that really sparked my interest. The Shippey Endurance Run was something I stumbled across the day (or maybe the day before) it sold out. It intrigued me because there was a relatively decent amount of climbing, it fit into a weekend when A would be at camp, and I'd only need to take off one day from work. Not to mention, I was able to get airfare for around $130 round trip! Ben was able to talk me out of running the 100 miler, but the 100k seemed like it would actually be perfect training. Good distance, plus - a night start! Never a bad idea to be out on the trails more at night.

I arrived at the start area of Beaumont Scout Reservation with more than enough time. I sat in the car and tried to nap, but it wasn't happening. Picked up my bib right at 4:30 and found out I wouldn't be getting a shirt because I registered too late. Womp womp. I still had 90 minutes to kill, so I redid my drop bags, lubed up my feet and put on my socks. Chatted a bit with a gal that was also running the 100k, and headed over to the start line with about 10 minutes to go. 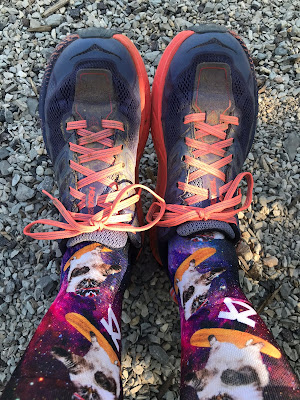 Very short race announcements - the course did make a lot more sense when it was explained with arm gestures, haha. 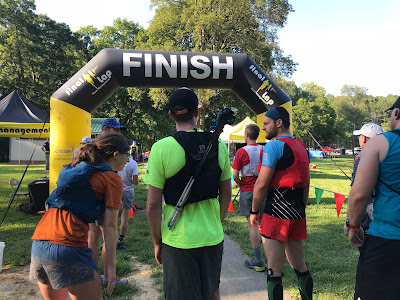 Right at 6 pm on the dot, we were off. The course was set up as a 20 mile "loop" which consisted of 5 legs. The first leg started on pavement for about two tenths of a mile, then we headed onto the single track. (I had loaded the gpx into my watch, although I never needed it). I was in the very back with two other gals and an older gentleman that was an incredibly fast hiker.
It was definitely hot and humid, but we were in the comfort of trees, so the sun was not actually blaring down on us. 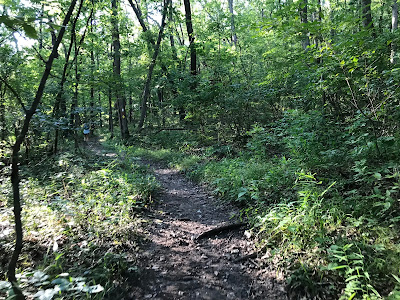 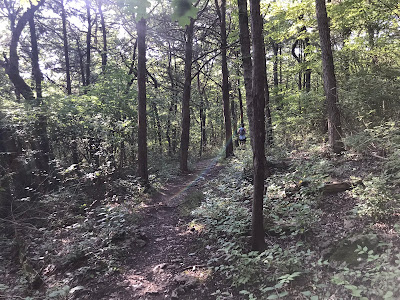 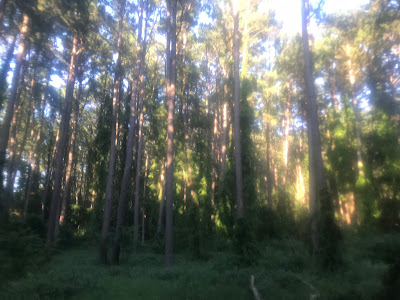 I was already feeling a little apprehensive about the steepness of the climbs. If it was hard now, how was I going to get through this later? The gal I had been talking with before the race really seemed to want to latch onto me and was pretty chatty every time I slowed down or walked. The trails were pretty - wooded and obviously not heavily traveled. There were also TONS of downed trees. We had to jump/climb over or duck under. Really added an OCR element. 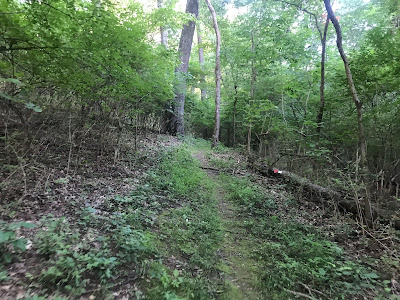 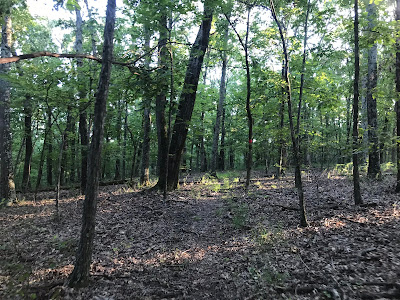 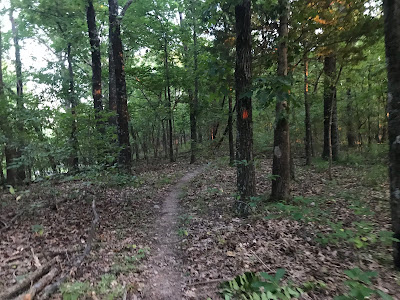 In and out of the first aid station pretty quickly, just stopped long enough for a 1/4 grilled cheese and to get my Kogalla. I wasn't sure how long the next leg was going to take, or if I might end up needing light before getting back to the aid station again.

This leg didn't seem quite as hard, I was able to run a lot more - and even passed the other gal that had been "just in front of me" for miles. I had a bit of a scare around mile 8 or so when my right big toe started hurting - badly. It almost felt like something was digging into my foot and I know I walked a bit more trying to figure out what was going on with it. Luckily, whatever it was, it went away after a mile or so. I turned on my Kogalla maybe 15 minutes before arriving at the aid station. I got in and out of this one even faster.

From here on out - it was going to be darkness (on unfamiliar trails) for the next 9-10 hours. I got into a pretty good groove. Hiking climbs, running flats & gradual uphills and downs. Even though the sun had set it was still incredibly warm and humid. I was drinking at least a 500 ml body bottle between every segment, sometimes more. I was using a half tablet of Nuun in each bottle and I was sweating profusely - so I assume I was hydrating well.

Although the course had seemed to be very confusing, it was really nice going in and out of the aid stations the same way - and in the earlier miles I actually got to see people occasionally.

Most of the race is already a blur. I liked that the longest stretch between aid was just over five miles. I got something small to eat at every aid station and consistently filled bottles. (Unlike the disaster of trying to use the front pockets of the Hardrock vest at Black Hills, the Adventure Vesta I got was amazing, and no issues).

Left the aid station after leg one of the second loop and ended up chatting with another runner, Hayden. He was using poles and I remember telling him that I wished I had brought mine as the climbs were definitely more challenging that I had expected. We ran together for a bit and he would lose me on the climbs and I would catch him on the downhills.

Keep on running... I remember finishing leg two of the second loop (so somewhere around the halfway point, thirty miles) and the two gals I had been neck and neck with after 5-10 miles were there too - which meant they were more than four miles behind me. That was a pretty great feeling. As I was leaving, a volunteer mentioned something about first place being a bit more than an hour ahead of me. Looking back, I think he confused me with one of the two other ladies. This segment had a small section of pavement after leaving the aid station so I pulled up the live tracking and it turns out that *I* was in first by over an hour. What?!

Hayden and I ran together a bit more of leg three, but at some point I moved on ahead and by the time I came in and out of the aid station it was obvious he wasn't going to be able to catch up to me.

I was pretty happy to be starting my last loop, but I was dreading the climbs in legs one and two that were definitely the toughest. For some reason I thought the 20 milers were starting at 6 am and I was just waiting for them to catch me. Arrived at the chapel aid station and was so happy to finally get ice in my bandanna and... AN OTTER POP. The sun started coming up on the second leg, which helped a bit, although obviously that mean the heat would be coming in. 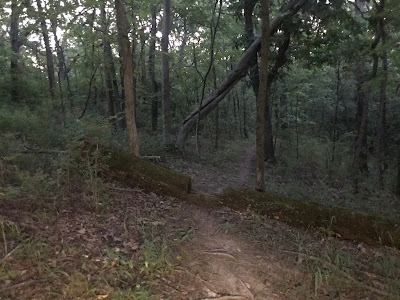 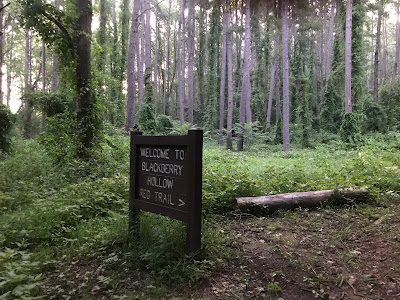 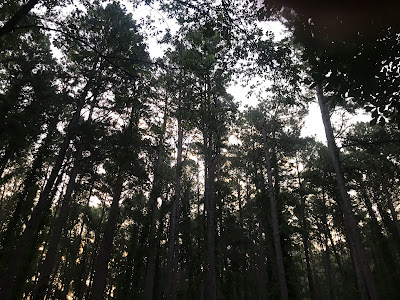 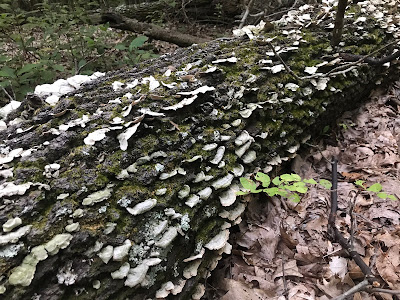 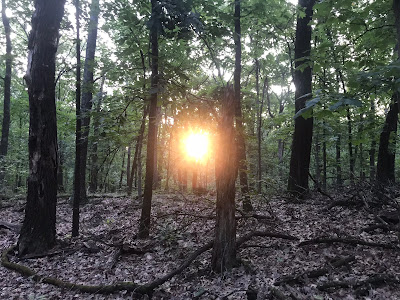 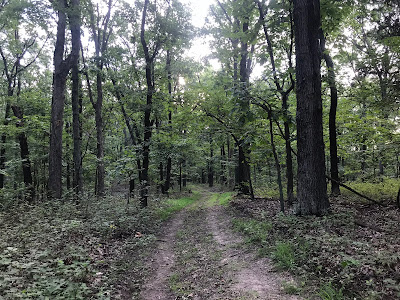 I was definitely alone out there. This loop was "clearing the cobwebs" - literally. Every minute or two I'd walk through another one. Gross and frustrating. I came into the chapel aid station for the last time and was able to get another otter pop. (Volunteers told  me I was lucky to have gotten one because the 20 milers hadn't been through yet). 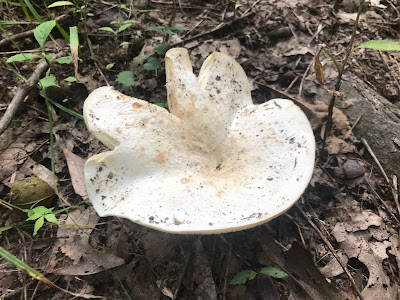 Leg three was when I really struggled. I hadn't gotten overly tired overnight, but I was "tired" of being on the trail. I had picked up two sticks but I think they might have actually been slowing me down a bit. I sat on a log and texted Ben to tell him I was going to nap. He very lovingly told me "the longer you are out there the longer it will take to finish." Ugh. Fine. I tossed down my sticks and headed out.

Honestly, I was actually feeling pretty good, I just wanted to be done. Came into the aid station for the last time before heading out for my last leg.
I debated leaving my pack there since I was just using bottles anyway, but decided to just leave it on. The climb out is probably one of the steeper ones and I was getting passed by the 20 mile runners. I took a random selfie of a turtle and then I did some run/walking to get through it. 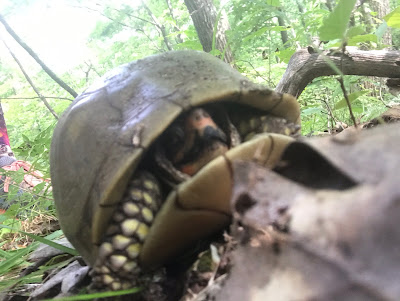 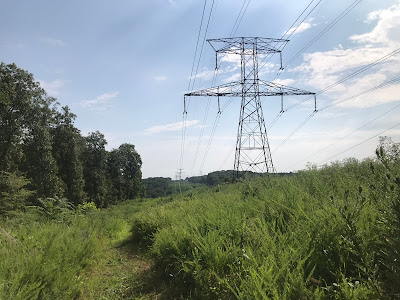 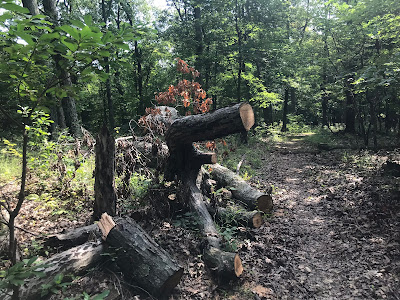 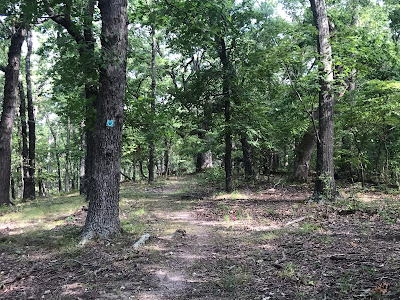 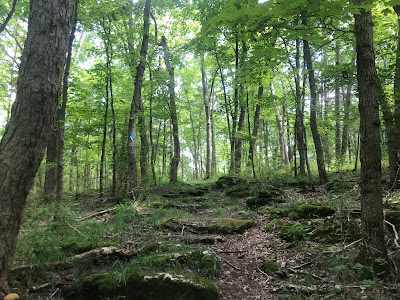 REALLY happy to be done with this one - and pleased that I ended up with first female. (Incidentally, since this was an inaugural, I technically have the course record - well, for one year until someone beats it, haha).
Collected my buckle, "medal" and award. Walked to the car to get out of my shoes and my legs immediately reminded me that I had just done nearly 62 miles. 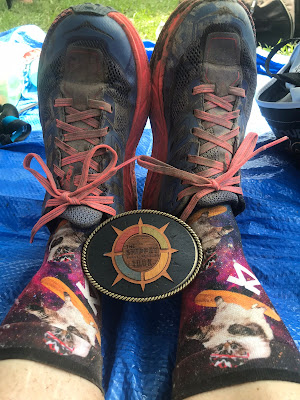 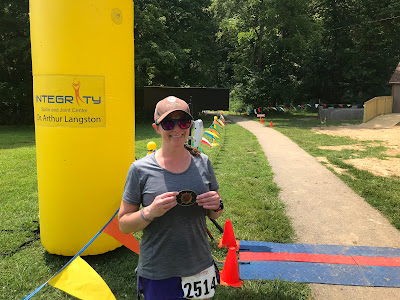 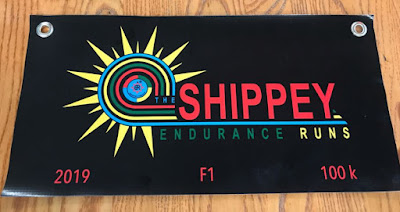 Stuck around at the finish for a bit having another otter pop and some pizza.