Tuesday (19,445 steps) - Strength class during lunch. REI was having a big sale, so I finally picked up my Micro Puff (that will hopefully get me a). through Tahoe and b). Through winter in general). 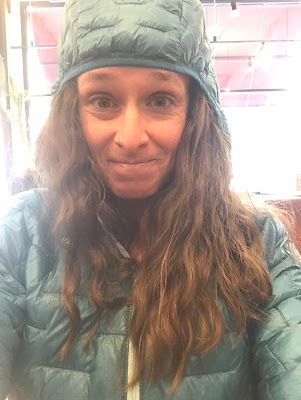 Forgot my running shoes, so I was only going to be walking again at Milk Market. I did do a few sections of jogging to break up the monotony of walking, however. Food was random and delicious (pesto & peaches on bread?). 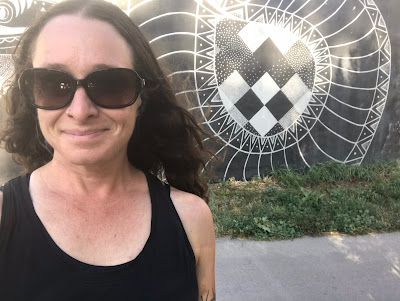 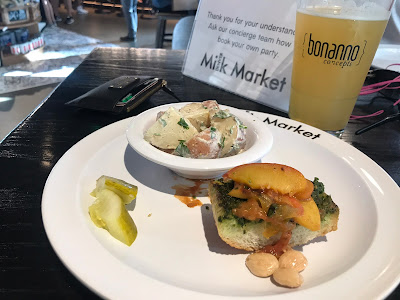 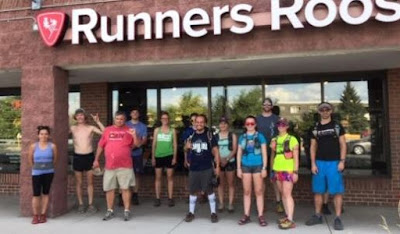 Super hot night again. Run was hard (is it ever NOT?), but still managed a fairly decent pace. First time I've actually run the whole route in a while. 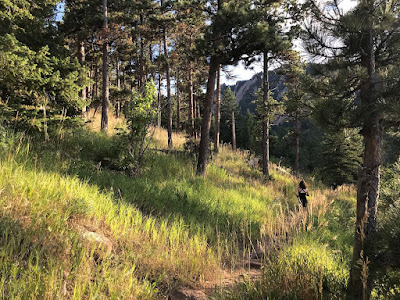 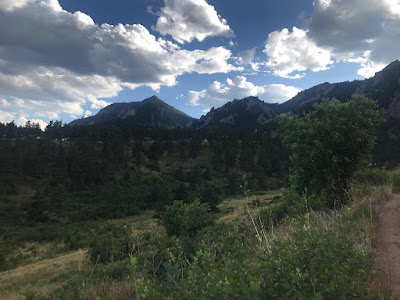 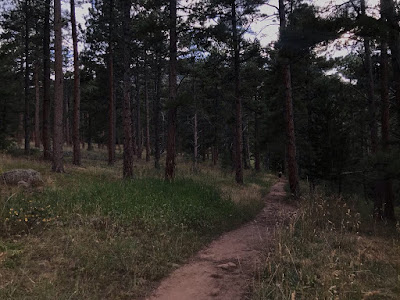 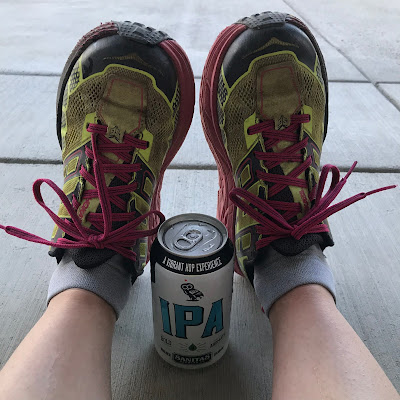 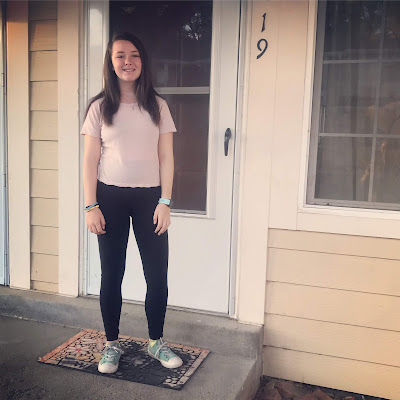 Left work early for volunteering with BMA & OSMP. A decided that she was too tired to go, so I drove alone to Boulder and met Chelsea at the free lot. We then drove back down to the Flatirons lot, where we were transported by truck most of the way. We still had to carry pickaxes and water, but it wasn't nearly as far as if we'd walked all the way from the lot. Work was a lot harder this time - pickaxes are heavy! We were gathering huge rocks and then digging holes for them to create "rumble strips" on a downhill to help with erosion and bikes going to fast. Late night. 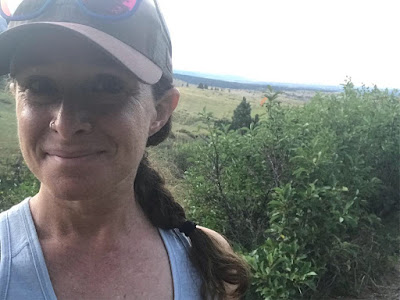 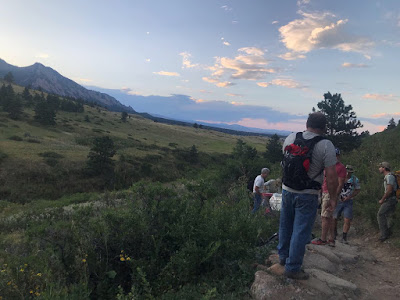 Friday (10,967 steps) - Core class during lunch. After work rushed home to grab A and a handful of things to head up the mountain. Heavy traffic again, and we decided on Noodles for dinner. A bit of a headache trying to find Velcro for Ben's gaiters, but we managed to get some from Lowe's, and got to his house around 8. In bed way too late for an early wake up.
Saturday (26,149 steps) - Up at 1:00 am. Yes, 1. Initially I told Ben to wake me up around 2:15, but once he was up, I was too. He is really... slow moving on a race morning. We enjoyed coffee and breakfast, and then he finalized all his packing. Still had to get gas on the way up to Leadville. Crazy that we still were parked (only a few blocks from the start line) with about 20 minutes to spare. Plenty of time for the bathroom and a pre-race pic. 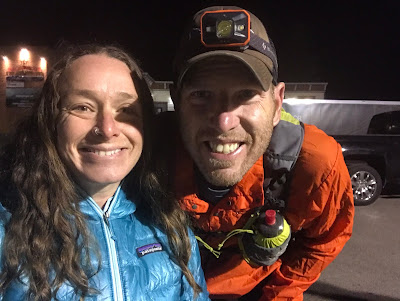 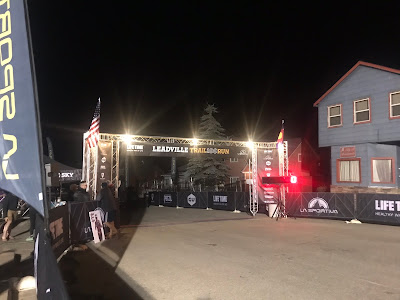 I ran into quite a few friends at the start, but at 4 am, I wasn't too keen on sticking around for a long time. Grabbed Oza's info on the house, then drove BACK to Ben's house. Had hoped to get a few more hours of sleep, but I was too cold. Up before my alarm, showered, had breakfast, and then A and I grabbed the last of our things and headed into Silverthorne for some coffee. Not more than a minute after leaving, I got a text from Ben - "I'm hurt. Lost some blood. Moving. Running. 911 called but I kept running." AND THEN HE DIDN'T RESPOND TO ANY FURTHER MESSAGES. "Luckily, he made it to the next aid station and a mutual friend of ours was working the medical tent, and she sent me a pic and message. He certainly did eff himself up. 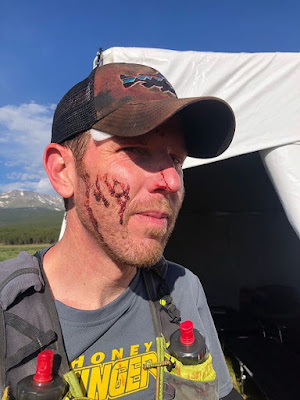 He wanted to continue running and insisted he was fine - so I messaged him that we would see him at Twin. Now of course THAT was also an ordeal. By 9:30 the line was so long for parking that I opted to drive all the way to the road to drop Ariel off with Ben's giant 400 pound bag. Ended up having to park nearly two miles away.

Found A with no problem at Becki Lynn's tent. Socialized with everyone while waiting for runners to come in. Everyone seemed to be coming in later than expected. Ben was in good spirits when I finally saw him, and he looked a lot better once we took a few minutes to clean him up and get him into a clean shirt. 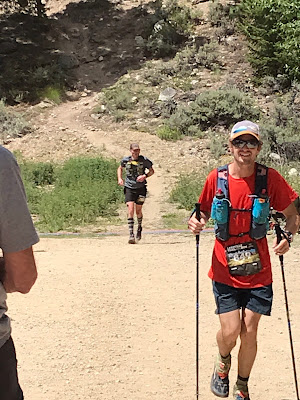 I walked him out to the road and told him we would be at Winfield. WHICH WAS ALSO AN ORDEAL. New this year, was needing to take a bus. As a conservative guess, we waited nearly two hours for a bus. We hadn't had a chance to go to the car (since it was two miles away), so we didn't have water, snacks or sunscreen. By the time we did get on a bus, they were overfilling them, so I had to share a seat with 2 people and A had to stand. FOR AN HOUR. 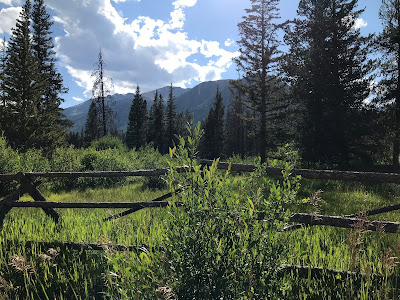 We finally arrived at Winfield. Hot & sunny. Chatted with Jeramiah, Andrew, Lisa A. and Koltin, while waiting. They really had us worried, but everyone came in about a half hour before cutoff. I actually got Ben out of the aid station pretty quickly, and Becki said she would take good care of him on Hope Pass.
We were there to watch all the people get cut that didn't make the cutoff, and I surprisingly emotional watching athletes get their bracelets cut and not being allowed to finish. Shockingly, the bus back was no better. We waited well over an hour for one, and when we got on, there were hundreds of others behind us. (Rumor has it some were still there at 9 pm!!)

Luckily, the bus driver was pretty helpful and stopped along the road near Twin and dropped us off, so we didn't have to walk as far to get back to the car. This time, we were only a little over a half mile away. Went back to BPCO's tent and thankfully Margo was there and made us some food. We were starving!!

As it got darker, we obviously got more concerned. Becki had sent her husband a text asking to give me Tylenol for Ben when he came in. Shortly after that, A got a text that Tyler wanted to drop and they probably wouldn't make the cutoff.

Once we were getting down to the wire (about 9:40 pm) - we walked over to the road and watched as runners were rushing to make the 10:00 pm cutoff. Yet none of them happened to be Ben. Once our watches read 9:55, we knew there was no way that he could be in and out of an aid station in that amount of time (we were probably at least a quarter mile from then aid station by now). Ugh. After all that work, Ben was going to miss a cutoff. A decided to go back to the tent to wait for everyone, and I planned on hanging out until I saw them.

It would be a while, nearly 45 minutes, before I would see them (and they were only minutes behind Jeramiah and Tyler). For missing a major cutoff and now a DNF, he seemed ok with it. We headed to the aid station to check in with medical and tell a race official that he was done (but accounted for). Both Becki and Ben were freezing, so we stayed in the tent a while for them to warm up. Probably around 11:30, we finally headed out. I had offered to give people a ride to their car because the thought they were about three miles away.
Thankfully, we had enough service to map to Tyler's place in Twin, as the thought of trying to get down to Ben's was daunting. His parents welcomed us in, and we were treated to some beer, pizza, and most importantly, a shower and a bed to sleep in. Lights out after midnight - but still earlier than any of us planned.
Sunday (5,071 steps) - Clearly, I did nothing. We were up early. Had coffee and decided to go into Leadville to watch the last of the finishers come in. By the time we go there, we only saw the last two official finishers. Spent some time at the Roost tent, congratulated Lexa, then went over to PB, where we remained with various groups of friends for a while. Went to Safeway to pick up some last minute food, then headed back up to Tyler's place at Twin Lakes. 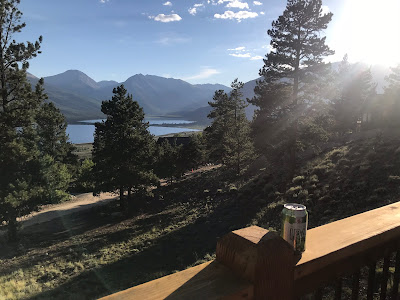 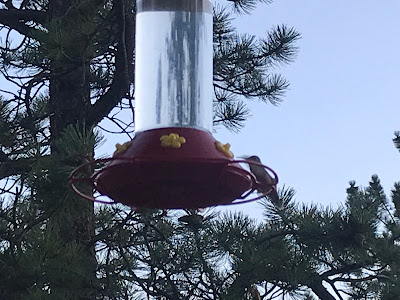 Monday  (7,669 steps) - Made the decision at 3:30 am that there was no way I could drive to Denver at that hour. Slept a little later, helped Tyler clean up, then drove into Frisco to take Ben to have his head looked at. A even got to go back with him for his catscan. 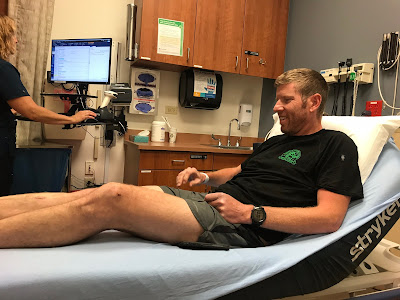 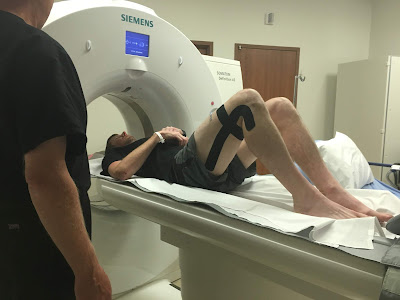 Thankfully, he did not sustain "serious" injuries from his fall (no brain bleed, breaks or fractures), although he was diagnosed with his second concussion of the year. We went back to his house for a few snacks and some relaxation before heading to Denver late afternoon. 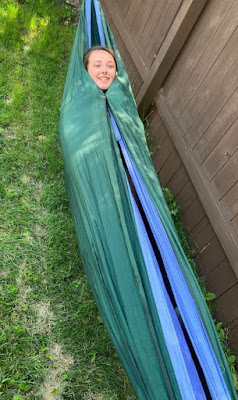 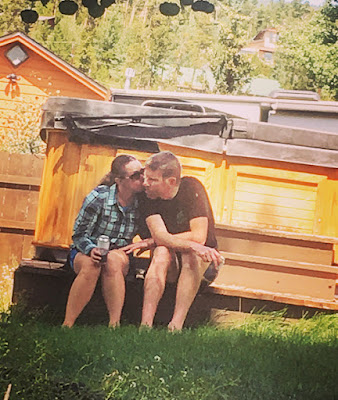 Took A to her Scout meeting, went home to shower & do laundry. After her meeting we went to Outback (thanks, Sharon, for the gift card). 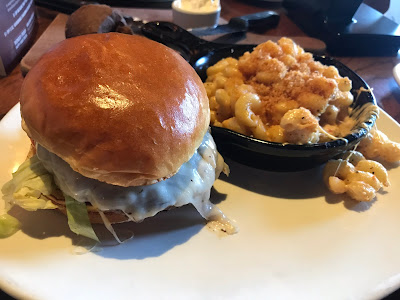