I signed up for the 50K as a last, long training run before Javelina. For the last two weeks, I had felt pretty blah. Felt very tired, and kinda sick of running. However, I have run various distances at the Bear Chase trail series every year since 2011, so I signed up a few weeks earlier and hoped for the best.

Left the house around 5:45, stopping along the way to drop off Rachelle and Ariel to volunteer with Pete at Cattail aid station. It was pretty chilly, and I was bummed to see that Pete had a volunteer no-show and he was alone when we got there. I offered to stick around and help set up, but he insisted they would be fine.
I headed into the park, with just under an hour until the start. It was chilly, but I actually had a jacket & drop bag, so I just headed to the start. Met up with Francesca and Jandy, and spent the morning chatting. 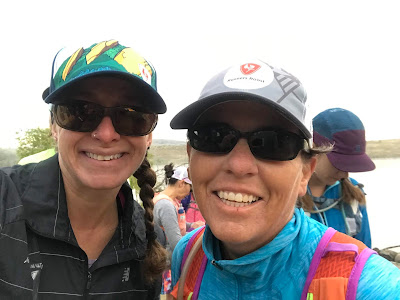 I opted to start mid to back pack, knowing that there is a decent amount of single track. I didn't want to be one of "those" people that is way further up than they should be.

It was a nice and cool morning, so I opted to keep my jacket on for the first loop, the only 10K route we would run. I also decided to just carry my handheld for the first one, in order to give my back a break from the amount of time I would be wearing my pack later in the day.

Took off with an easy jog, letting others set a faster pace. I've run enough trail races to know that soooo many people would go out too hard and fast. Stay patient. The early miles were pleasant. Early river crossing that so many were cautiously trying to cross without getting their feet wet. Just barrel through! 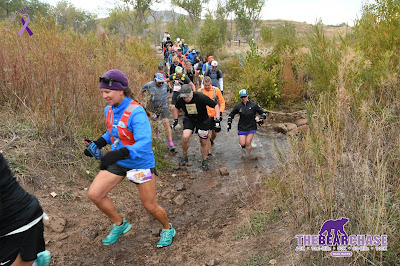 Heading toward Mt. Carbon early, with plans for walking up. Stuck with Jeramiah for a bit, saw Francesca behind me. 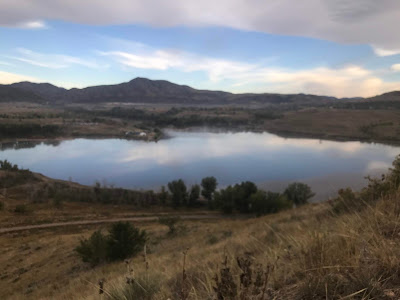 Ran down the back section, my favorite part, passing a handful of people. Turned left, away from the river crossing that we would pass on our two large loops later in the day.

I remember this section as being a slight uphill, and allowed myself to take short walk breaks as needed. Looped around and headed into the only aid station on this loop - Boat Ramp. Decided to not stop as I still had fluids and didn't really need a break. The next section into the start/finish was nice and easy. 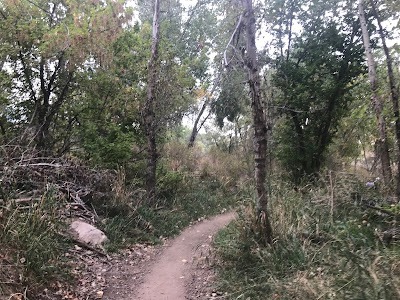 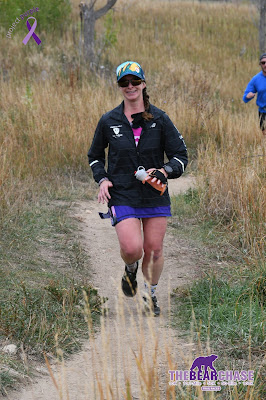 I finally had caught up to Jandy, and she said that she wanted to run with me. Oh boy. Last year, we had started together and she ended up beating me by nearly an hour. I really enjoy running with her though, so I was looking forward to it.

We came in through the start/finish area, I grabbed a pickle and a couple chips. Quickly stripped off my jacket and put on my pack. 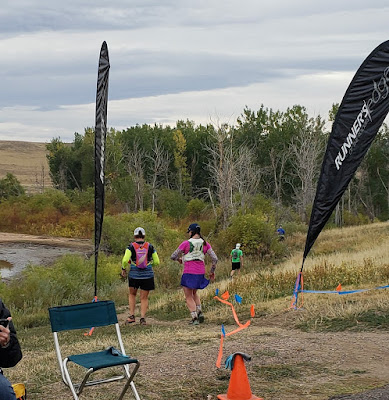 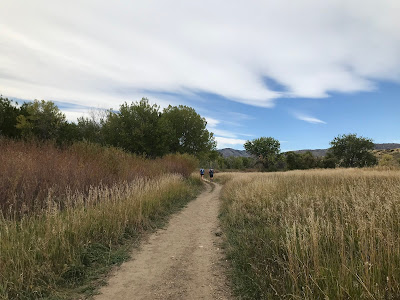 Jandy was apparently fine with me setting the pace, and we actually kept a pretty good rhythm going. We ran a lot more than I had planned/expected to, with the exception of Mt. Carbon and the steeper climbs.

We arrived at the water crossings and it was still pretty chilly out. The first crossing was more deep than I remembered, and the water was cold. As in years past, I took off my shoes for a good section of the sidewalk. I had opted to wear my Summit Unknowns, and for whatever reason, they seemed to let in a bit more silt/sand from the water than other shoes.

Also, with it being cooler out, it seemed like the insoles were retaining more water. Put my shoes on, grabbed more food, and then had to chase Jandy down, as she had headed out quicker than I did. I ran the lower section of the steep climb and caught up to her on the soul-sucking part by the road.

Things were much better when we got to the lower section in the Cattails, and it was much greener than I had remembered from years past. Our pace was steady in this section and I didn't remember it being so pleasant. 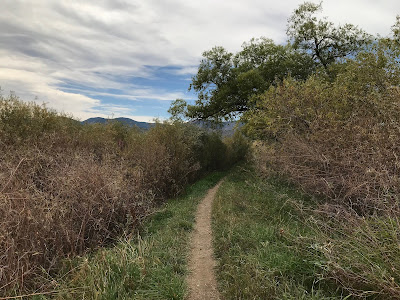 We finally arrived at Cattail where we got to see A (who seemed much happier to see Jandy, haha). I grabbed some coke and a peanut butter & jelly sandwich and then headed out. I told Jandy I planned on running some of the section out of the aid station so we could walk later up the last big climb of the loop. 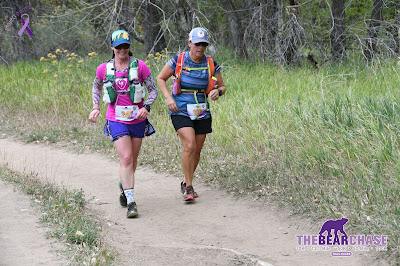 At this point, Jeramiah was a few minutes ahead of us and I worried that he had started out too fast. The next section I remember always walking in the past, but it was still cool out, so we actually ran a big portion of it. The next section was a nice downhill into Boat Ramp, and we also ran that. 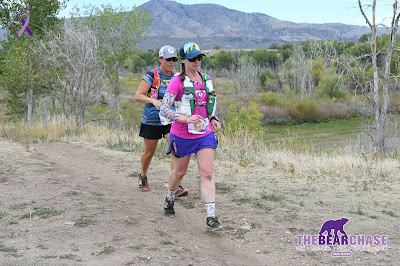 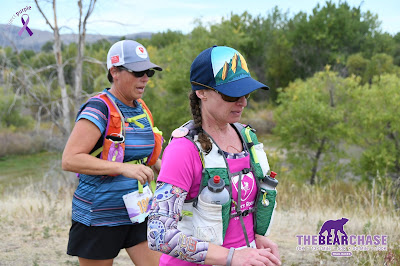 Picked up some Mountain Dew and an Oreo with a dollop of peanut butter on it and then headed out for the last section until we got back to the start/finish. We walked some, but not much. I do remember thinking that the course, overall, was also sandier than in the past.

In the tree-lined section there were a TON of bugs, and one even flew directly into my eye!! It was awful, I was blinking and rubbing it trying to get it out. Came back through the start line, where Lisa (who I ran with last year) got some pics of us. If you look closely, you can see all the dead bugs on my neck. Ew. 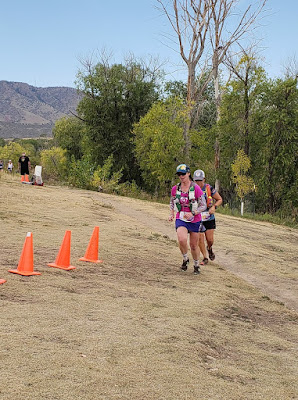 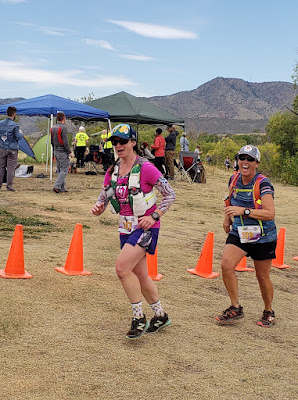 I was feeling pretty good coming into the last loop. I had set what I thought were some pretty reasonable time goals, and the way the first 19 had gone, I thought I had a shot at getting under 7 hours, a feat I had not accomplished since my very first 50K in 2011.

The sun had still not come out, and we were enjoying much cooler temperatures than in previous years. Hike up Mt. Carbon, run the backside. Jeramiah had ended up behind us (briefly) and we all ran together through the water crossings (and even saw what looked like a young Fabio (built, tan and shirtless) riding a horse toward us. A funny conversation ensued regarding hallucinations, but I guess you'd just have to be there. 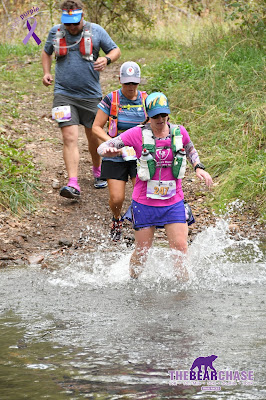 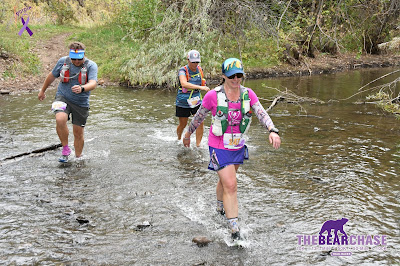 Took my shoes off again, and this time I had a bit more trouble getting the insoles to lie flat. Thankfully, did not end up being an issue.

We did more run/walk this section of the course after Fox Hollow, but still ran most of the cattail section. Once again, it was great to see everyone at Cattail.

Maureen and Colfax were course marshals, and she got a few pictures of us running. Whee! (I look like a total monstrosity compared to Jandy. 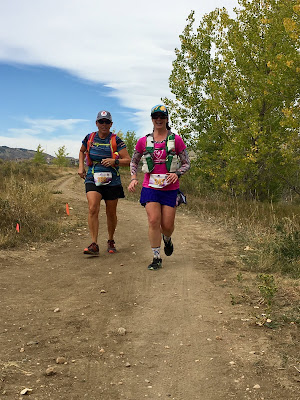 At this point, we have just a few miles to finish. We are looking good time-wise. However, it was FINALLY starting to warm up. Did I have it in me? We ran into Boat Ramp and we had about 45 minutes until my "7 hour goal."

We passed Jeramiah on the flats and never saw him again. I felt strong on this last section. I was also having a hard time remembering where the course went, so I wanted to run as much as possible. As we were getting closer, it seemed that we might even be able to go under 6:50, a time I honestly thought I would never see again.

Coming up the final hill, we agreed to run it in together. SO PLEASED WITH THIS FINISH TIME!!! 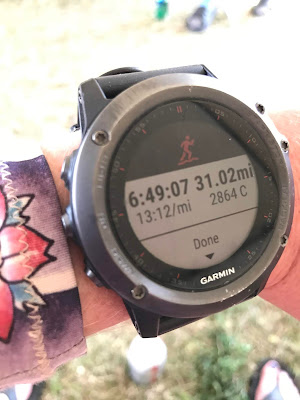 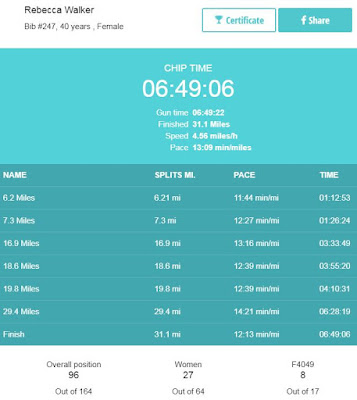 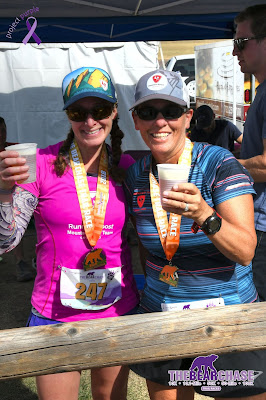 Maureen had agreed to bring the girls over to the start/finish after their shift was over, so I had time to take off my shoes and relax with a few beers. I also discovered, after looking it up, that I was less than 2 hours off my PR time. HOLY CRAP. I don't know that I could have beat that time, but if I was THAT close, I may have tried to push a bit more. But I'm not upset over it, this was really the strongest  race that I've had in a very long time, and it's pretty incredibly to me that I ran so "fast" at the end.