Tuesday (22,348 steps) - A new to me upper body strength video. This was a bunch of super sets and it was strange in the sense that it was alternating arms instead of the standard moves. Not sure if I would do this again, but it was different. I used too much weight on one of the exercises and I almost dropped a dumbbell on my head. 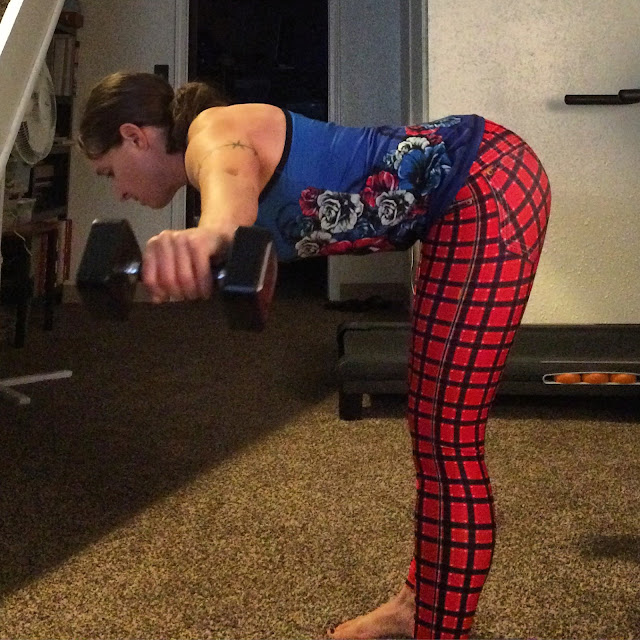 After work we went to HuHot for dinner - have I mentioned how much I love their food? Then on to A's conferences at school. A 20 minute slot lasted about 3 minutes. She is testing almost 2 years ahead in math and a year ahead in English. She is respectful, confident and well-liked. 4.3 mile run at the gym that was actually enjoyable.
Wednesday (20,560 steps) - Abs/Obliques/Lower Back. This was tough... mainly because I have zero abs. All the reps were 50 seconds on and only 10 seconds of rest. Challenging, for sure. Left work a tad early to pick up A and go to run club! 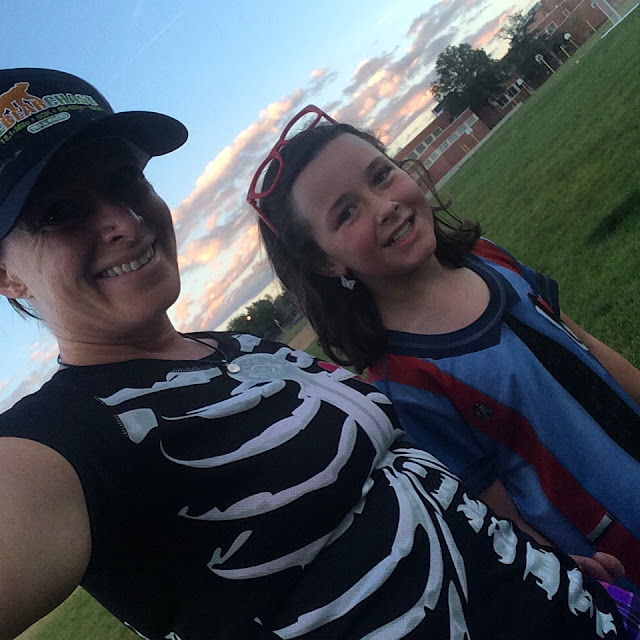 Had a great evening running with Heather and Lisa. We stopped for a quick dinner at Noodles before heading home.
Thursday (17,708 steps) - HIIT and butt/thigh. I had done this one before, and as far as HIIT goes, it wasn't too bad (except for the Oz jumps, those are terrible). Got A packed for her camp over the weekend and then a quick jog in the basement inferno.
Friday (18,643 steps) - Cardio and upper body - although I feel like this wasn't as "cardio" as I expected. I had done this video before and it was pretty good for a quick workout. A was headed up to Girl Scout camp for the weekend so I had the house all to myself. I went grocery shopping, picked up a pizza and beer and binge watched "Fear the Walking Dead" with the cats. Up entirely too late. 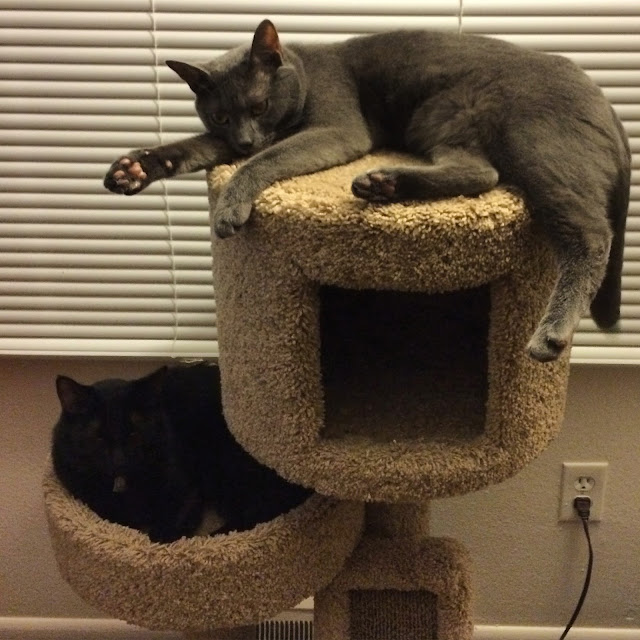 Saturday (41,743 steps) - Which meant that getting up to run 16 miles in the morning was NOT THE BEST. I had signed up to do a drop in run with Runners Edge, but the course maxed at 14 miles. So I did 2 miles on the treadmill before I left. When I got to the run I was pleased to see my friends Carol and Sheila from run club. I was not pleased to know that I would be the only person in our pace group running the full distance. Womp, womp, womp. So the first 3-4 miles I was running with the group on the Farmers' High Line Canal in Broomfield. A very small portion was on Big Dry Creek, but most of this I had not run before so the change in scenery was nice. Somewhere around mile 5 my stomach began to get topsy turvy as a result of the pizza and beer (who knew this wasn't the best carb loading I could have done). Luckily I found a bathroom and the rest of the run went fairly well. It got hot at the end, so I was glad I had gotten up early to get this done.
I did a bit more grocery shopping, took a shower and picked up Pho for lunch. When I got home I threw some food in the crock pot, napped on the couch and sort of watched a show on Tiny Houses. (Which I find FASCINATING). I baked more of the awesome red velvet brownies for a party we were going to. 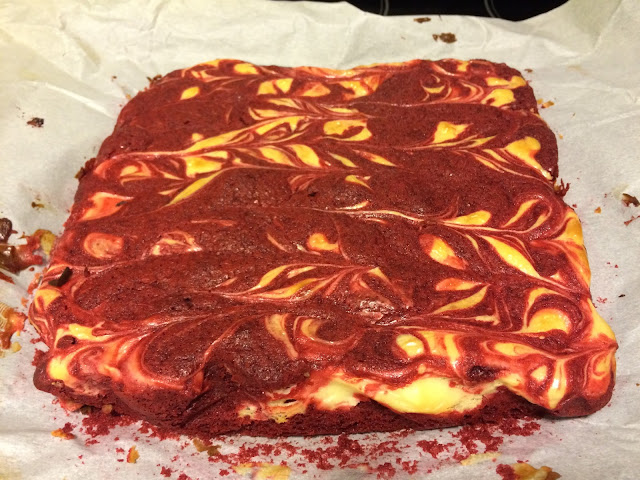 Evening was more binge watching of shows not appropriate for A, included the premiere of American Horror Story (wow).
Sunday (16,016 steps) - Up just as early to head to Louisville for volunteering at the Louisville Trail races. I started my morning by working at bib pick up (and I knew almost everyone that picked up - and even saw Ryan from Desert Rats stage race I ran over the summer). I also assisted with the merchandise tent, worked an aid station, and then stuck around to work at the food tent handing out burgers and chips. It was a very long day, I was out there for about 6 hours. 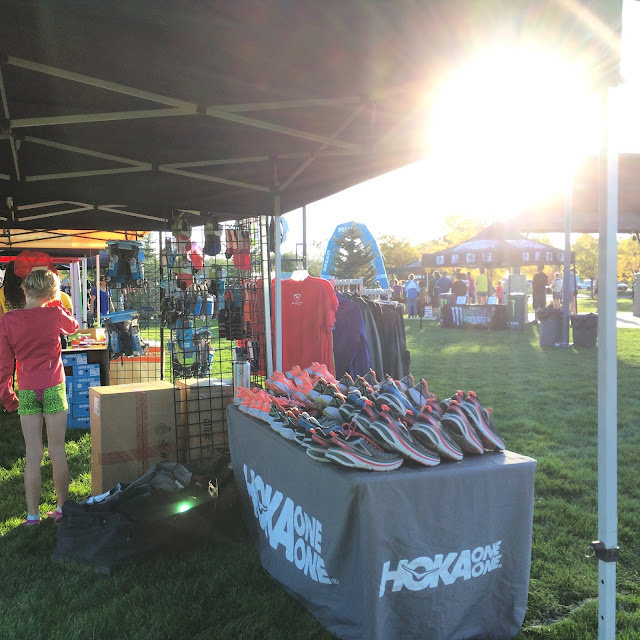 I had grand plans of running 4 miles. Turns out the beer and burger didn't settle that well and I only jogged for about 15 minutes before I went home. 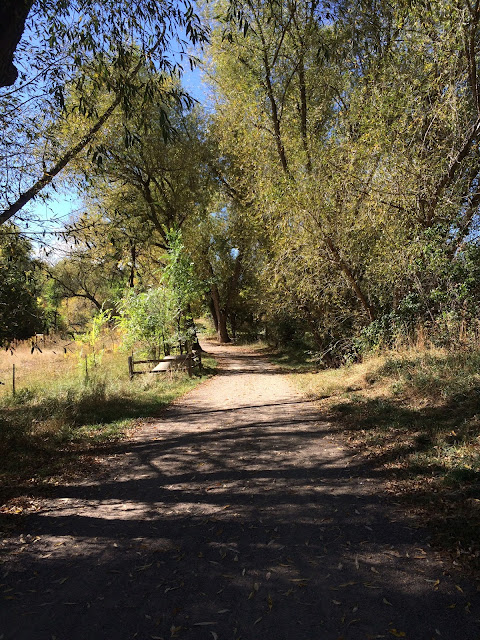 Shower, quick lunch, and then picked up A from camp. We headed into the mountains for a birthday/Halloween party for our friend Heather. It was another great party and as usual I love seeing all my friends.

Home relatively late - basically just enough time to get unpacked, do laundry and get homework done.
Monday (19,939 steps) - Total body HIIT and strength. Luckily it was more strength than HIIT, as I was pretty exhausted from the weekend. The weather has been "fall fantastic" - cool in the mornings, clear and gorgeous. I had been dying to check out the path behind our place and went out for a quick jog before dinner. Miraculously, not a section I have run before - I can't wait to see where else it goes (and there is a nice hilly section in the event I ever pretend I want to do hill repeats). 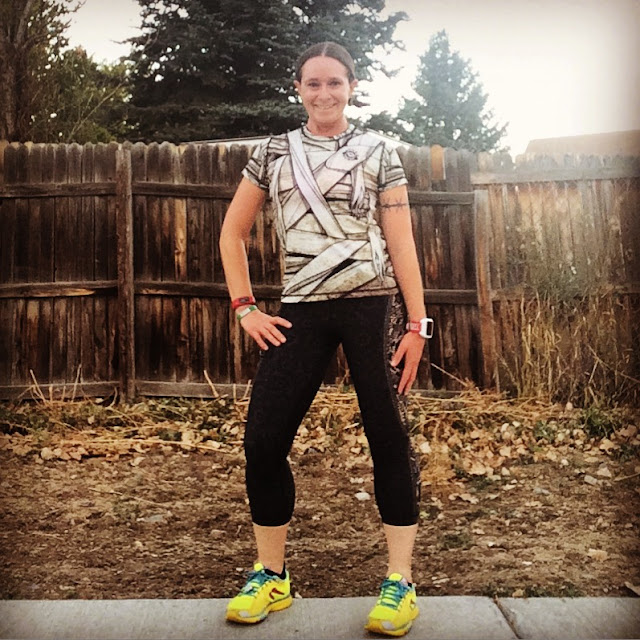 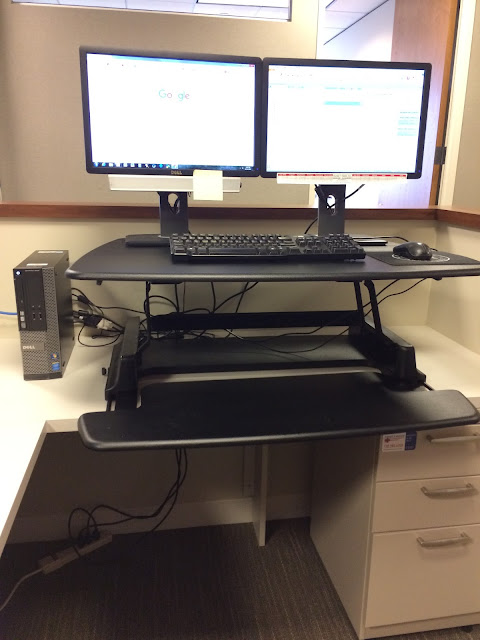