Halloween races are my FAVORITE. Ariel, Heather, Dan and I were looking to find a fun race that we would be able to wear costumes at. We found the Monster Dash race up in Louisville with both a 5k and 10k option. We gave A the choice of what distance to run, and I was surprised that she picked the 10k.

One of the best parts about the race is that it was NOT a morning race! That meant we would actually be able to sleep in! And there were tons of other things at the race for an afternoon/evening event.

With the race starting at 3 pm, we headed up around 1:00 to find parking and our friends. We arrived around 1:30 and found a spot on a side street behind the finish line with minimal difficulty. We spent the next hour doing pre-race pictures, talking to people and wandering around. 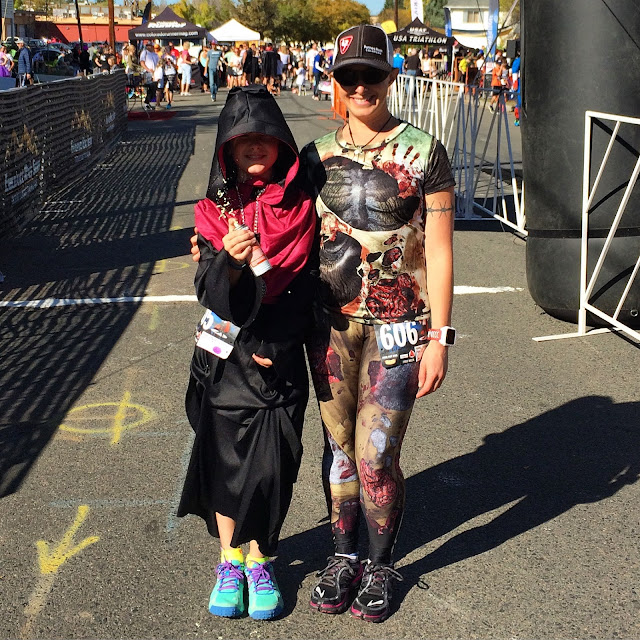 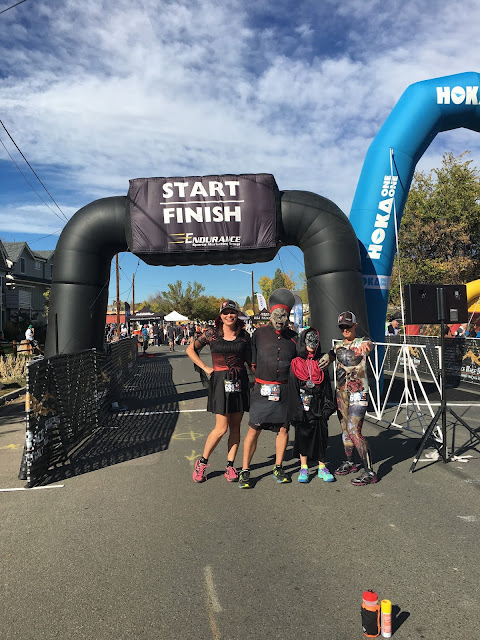 The 5k and 10k lined up at the same time - right before the start we ran into our friend and teammate, Maureen, and we all headed out together for A's second 10k.

A and Dan had both chosen horrible costumes to run in. Full length black robes and masks and head coverings. It was a fairly warm day and the sun was shining. I had a feeling that A was going to get HOT in her costume, and I was right. Between the hot costume and the annoying "medallion" - there were plenty of things BESIDES running for her to complain about.

Right off the bat this was a better event than the race we had chosen last year. Most of it was on "trail" and it was a lot prettier. Plus, there wasn't a giant hill on the course. A did great the first few miles, struggled a bit the middle 2, and then had a strong few miles for the finish.

The most fun we had on the course was when Dan ran ahead and while us girls were gabbing further back, we managed to jump out from behind a tree - scaring us all nearly to death. It was a fun race though. 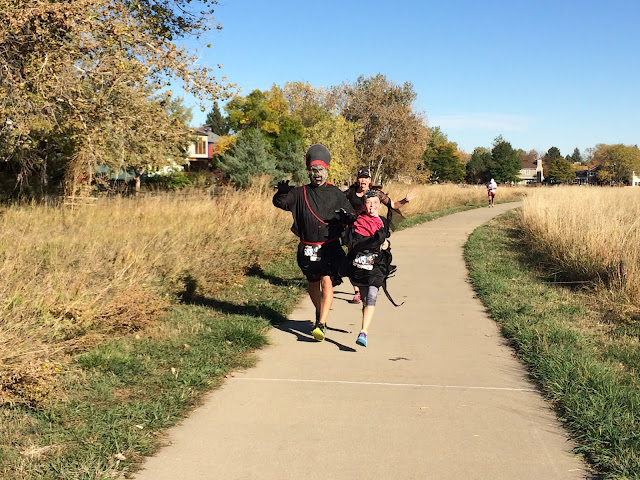 My only complaint was that they started the kids races before we had a chance to finish... The last 10th of a mile we were trying to run into the finish line and there was a sea of flailing arms of hundreds of kids and their parents and strollers and dogs headed straight towards us. That was a bit of poor planning, as at least part of the road should have been coned off so that we could finish.

There was no "chip" timing for this race so we don't have an official finish time, but my Garmin definitely showed a HUGE 13 minute PR for A!

We collected our wine goblets (with a comment from the volunteer "did you guys even finish?") and then we wandered around looking for the food and beer.

The finisher party was at a restaurant a few blocks away, so we all walked over and got a seat on the patio so Maureen could have her dog sit with us. It was a great evening of good beer and good food (seriously, the restaurant made an amazing mac and cheese with green chilies and bacon and to die for brussel sprouts!).

I went for a quick walk to the car to move it closer to the restaurant and to get our hoodies, as it was getting chilly in the shade. 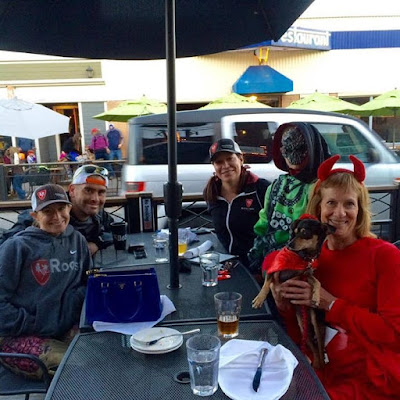