Tuesday (9,150 steps) - Barre Express with Gabi! Also my last class at the studio. In an effort to save money, I'm trimming expenses, and sadly, the studio was a big luxury, so it had to go. I was pretty impressed I was able to get through the class since walking was still a struggle. After work we made cookies for our upcoming RMRR potluck.
Wednesday (13,814 steps) - Runners Roost Boulder! I was obviously in no shape for the trail run, so we decided we would do the road 5K. New Balance was there and we got to demo some of the new road shoes - which I really liked!! 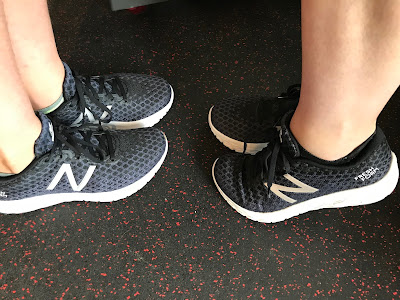 Initially, I planned on walking most of it. However, once I put on shoes (first time I had worn shoes since the race), the back of my right heel hurt and it actually felt better to run (vs walk). We ended up doing 1:1 intervals (much to A's dismay). 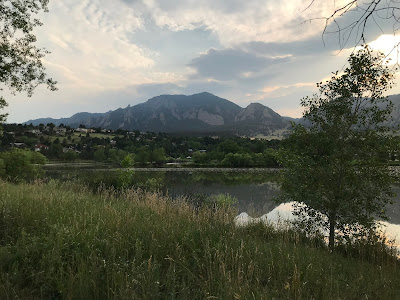 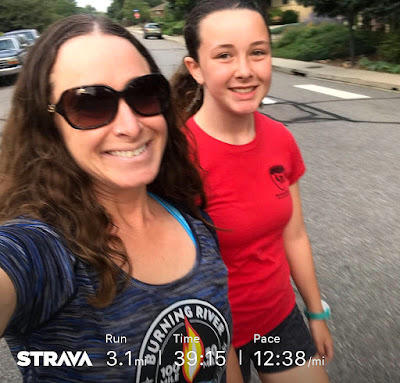 Thursday (10.043 steps) - Went to the gym during lunch for another circuit workout. Man, an hour flies by. 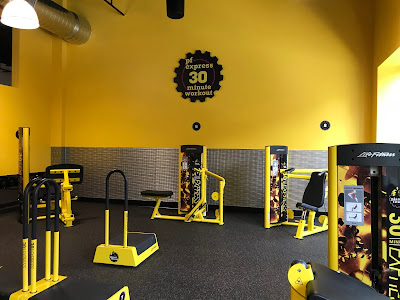 Skipped run club.
Friday (23,060 steps) - Up early to meet a bunch of folks at Wash Park for Pete's birthday run! Somehow, I was able to run 3 (fairly speedy) miles, with very little walking.
After work we headed down to Centennial for the RMRR 5K and potluck! I was unsure how things were going to go, especially since I had run in the morning. I planned a 2:45/:45 interval and started towards the back of the mass start. Interestingly, the intervals worked pretty fantastically, and this was the fastest overall pace I have done in ages - sub 10 minute miles for a whole 5K??! 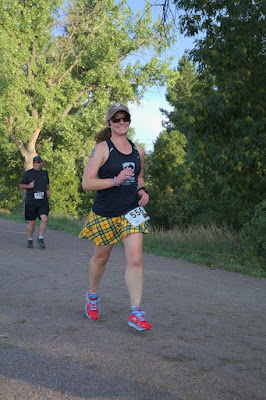 After, we stuck around for #allthefood - left around 8:15, mainly because we were getting eaten alive. (Damn mosquitos.)
Saturday (23,355 steps) - Runners Edge! Thankfully, no aid station, so we were able to stay in bed a little longer. Met at Lyons Park in Golden and I had planned on 6, and thankfully, the route was a 6 mile loop. I planned on "run/walk" but with no set intervals. The outbound miles were hilly, so I walked a lot more, then took it easy on the flats/downhills. Not too bad of a pace. I dangled my feet in the creek for a bit, which felt great (after I got used to it). 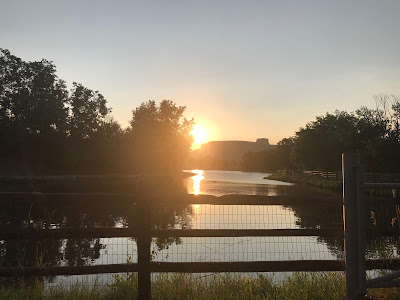 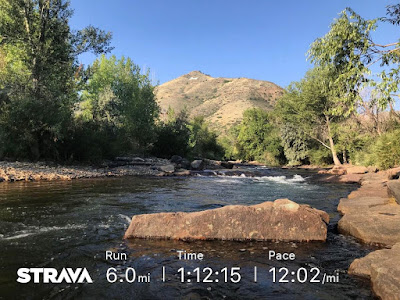 Alexa, Kristin, Randy, Pete, Janet and I all went out to breakfast at the Table Mountain Inn in downtown Golden. Man oh man was the food good. I couldn't even come CLOSE to finishing it all. 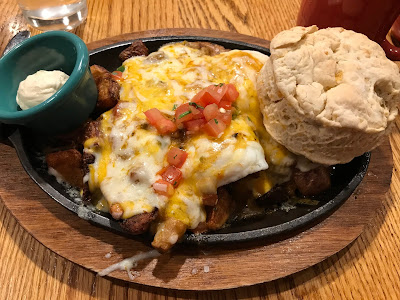 Then, we drove up to Boulder for our annual volunteering at IM 70.3. This time we were at the first run course aid station. It was hot and exposed. It was windy and the tables didn't rest flat, so it was tough to fill up cups. The wind really picked up at the end, felt bad for the people that were out in it. Also, I was glad I didn't know until the end that we were volunteering near a rattlesnake nest (den?) 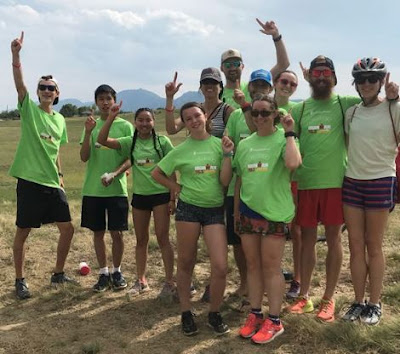 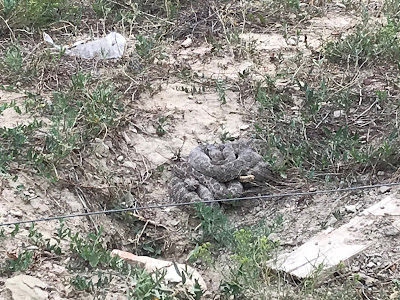 I told A she could have a friend over for a sleepover, but the girl's parents said she couldn't come to our house, but A could go over there. So after we both were showered, I drove her over, then stopped at the grocery store. Stayed up ridiculously late (like 11!)
Sunday (8,356 steps) - The day of nothing!!! I stayed in bed until almost 10:30. I can't even remember the last time I didn't have to do anything. Watched TV until A texted me to pick her up at noon. We went to the mall (ick) to do some back to school shopping. Thankfully, A is thrifty and only picked out a handful of new clothes. We got all her actual school supplies done as well. Glad to have that out of the way. On the way home we stopped by to see Sully. By the time we got home it was after 5. A made me breakfast for dinner and we watched Lifetime. (Life is good!)
Monday (21,117 steps) - Took my first classes at PF. First was core, which wasn't quite as tough as I imagined it would be. (Maybe I'll be feeling it later, who knows). I stuck around to take the PF360 Strength, which I really liked. As always, probably not the best idea if I have a trail run the same day, but eh, I've never made the best decisions.

Thanks to an earlier storm, it was overcast and "cool" for our run at North Table! A decided to stick with Paula and John (and Maya, the dog), while I did my own thing. I didn't feel as awful as I assumed I would, although my ankle was still feeling a little tender. I even opted to do the two mile add-on loop on the new Rim Rock trail. 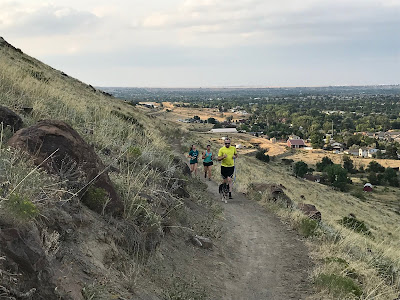 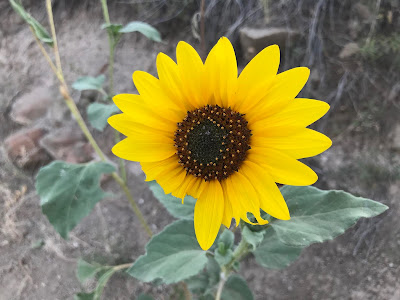 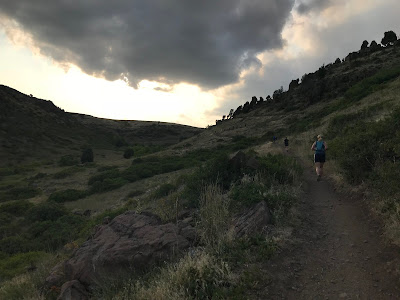 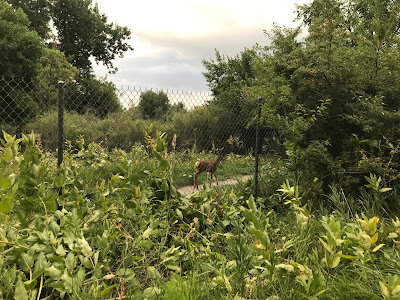 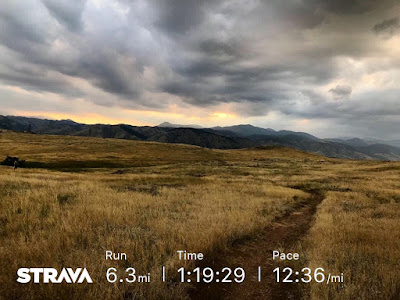 Even though one of my favorite food trucks was at the brewery, we opted to go home for dinner instead.