Week in Review (December 13 through December 19)

Tuesday (19,062 steps) - Totally motivated to get out of this "lazy" slump. Up a few minutes before my alarm, put on ALL the warm weather clothes and went for a 4ish mile run by the lake. It was damn cold, that's for sure. The fleece tights definitely seemed warmer, although my legs still felt cold and were red when I got home. 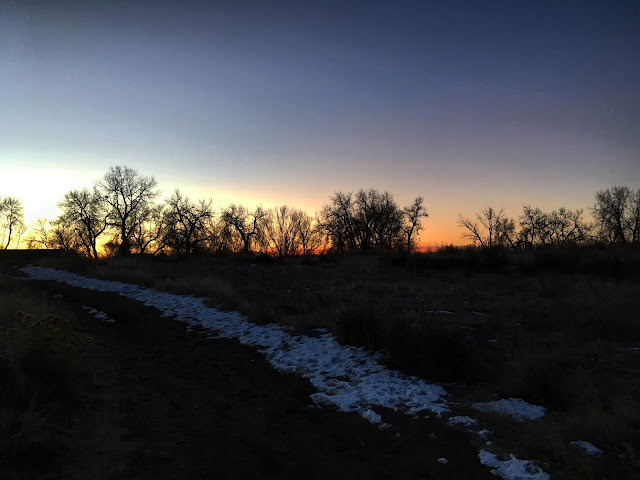 Went to Laura's barre class during lunch. Gymnastics after school/work. Watched The Talking Dead and part of an episode of Friends before bed.
Wednesday (19,084 steps) - Picked A up at school and then she came back to my office while I finished up the day. We went to the Runners Edge holiday lights run for the second year. Thankfully, it was a lot warmer than the forecast said, although it did get really windy on the way back. 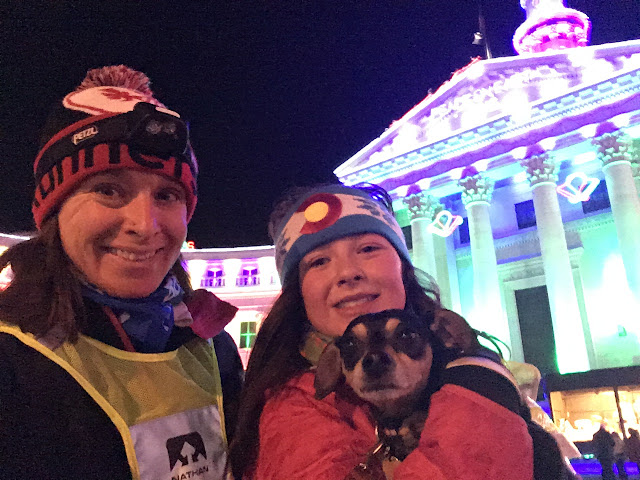 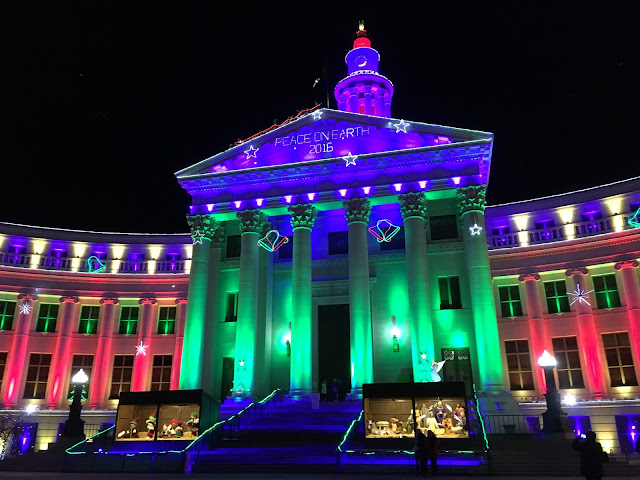 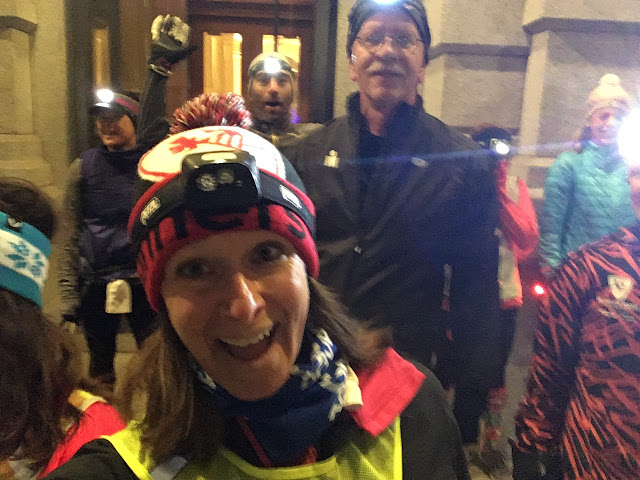 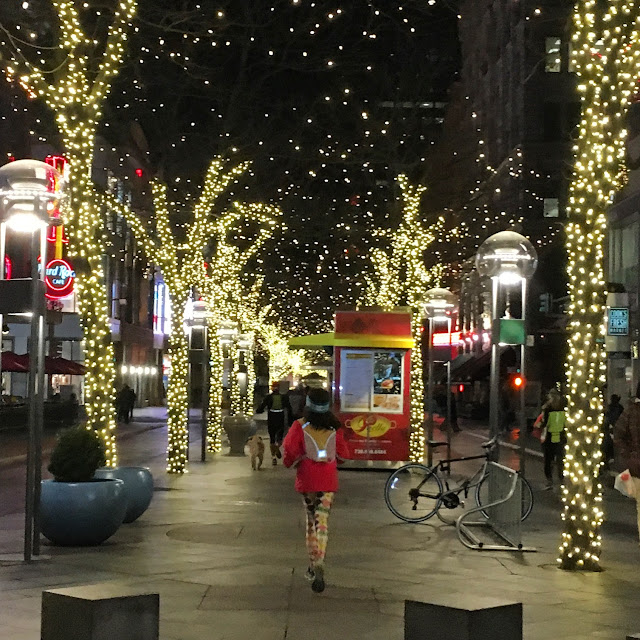 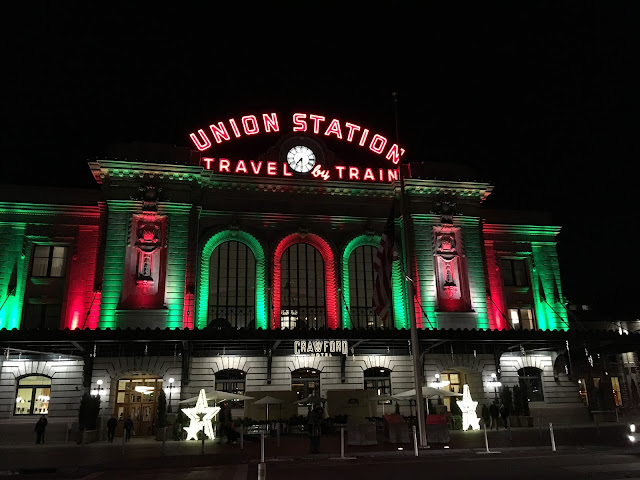 We went to Amato's for a while, I only had a beer. We had dinner at home (really trying to save money).
Thursday (14,109 steps) - Went to Meredith's barre class before work. Picked A up at school again, this time taking her home because I had my ERS ambassador dinner after work and she wasn't going. I stayed at work until about 5:40 and then sat in wretched traffic. The dinner was at Kachina, and it was delicious. Happily, ERS picked up the tab, so I had beer, shared some appetizers, and had some tasty enchiladas. It was nice chatting with everyone, especially Stacy. 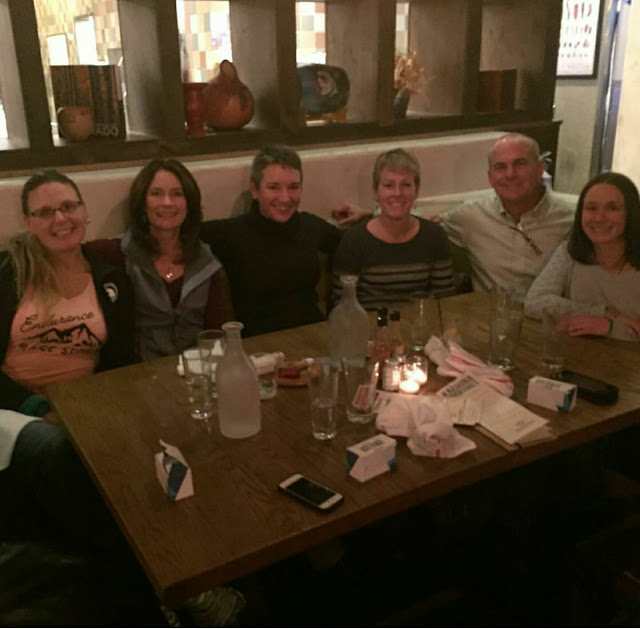 I had told A we would eat at home (when I was expecting to have to pay for myself), so I stopped and picked her up some Torchy's Tacos on the way home.
Friday (26,814 steps) - DRAGGING this morning. Runners Edge emailed to cancel our Saturday long run because of the predicted polar vortex temperatures (that are suggesting wind chills of -20). Since finding out that the office would be closed for everyone, not just those attending the party, I packed my running gear with hopes of getting in a good trail run before the cold weather comes. Got off work just before 2:00 and drove out to North Table. It was overcast, but had warmed up to about 30 degrees. I headed out for a the big loop, just under 9 miles. As usual, I struggled with the climbs, and I bit it pretty good about 3 miles in. Around the halfway point, on the west side, the wind picked up quite a bit and it got pretty chilly. There was also some snain, so that was fun. A called me, forgetting that I was running before picking her up. 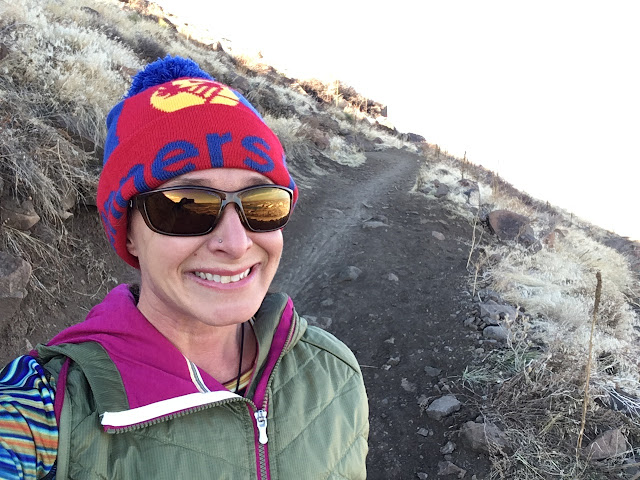 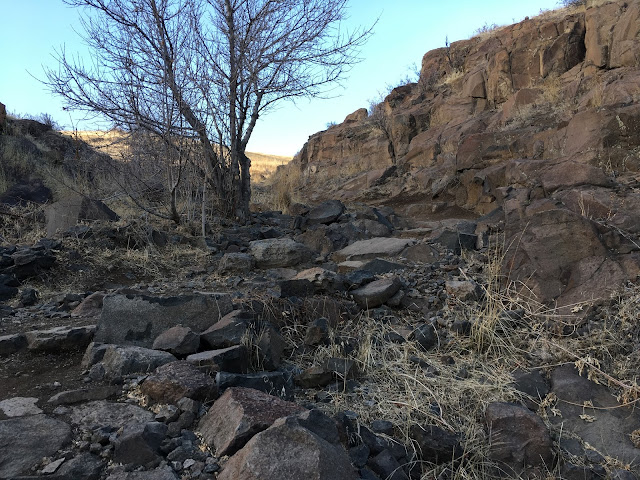 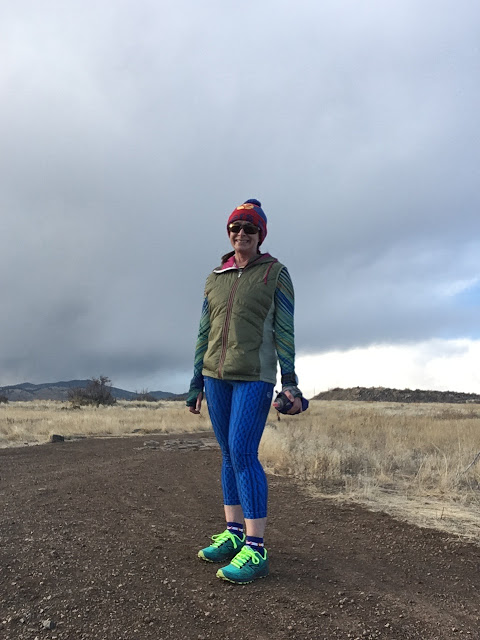 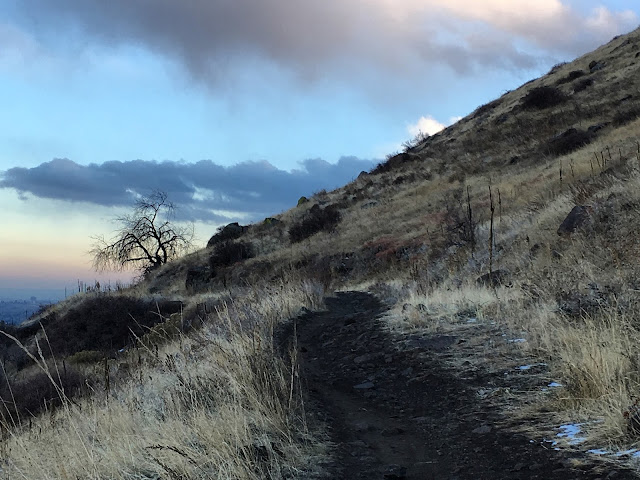 I got done in about 2 hours, and picked up A right around 5. We made a quick stop at the grocery store on the way home.
Saturday (17,960 steps) - Runners Edge canceled due to the snow and cold. Threw some chili in the crock pot. We had gotten a lot more snow than was predicted, but since I was up I decided to go to a barre sculpt class. Traffic was light, but the road conditions were terrible. I couldn't park where I usually do because nothing had been plowed. I squeezed into a metered spot right before class starts. Of course, about 5 minutes into class I realized I had not fed the meter, so I waited until we were done with the set and threw on my boots and ran out to put money in. So embarrassing. The class was really good, unlike any other barre class I have taken.  A made breakfast and we vegged until it was time to take her to her birthday party. I decided to go for a run (in 0 degree weather) at Lake Arbor, because they always plow there. ONLY THEY DID NOT PLOW THERE. I had the right gear, but I don't love running in deep snow. 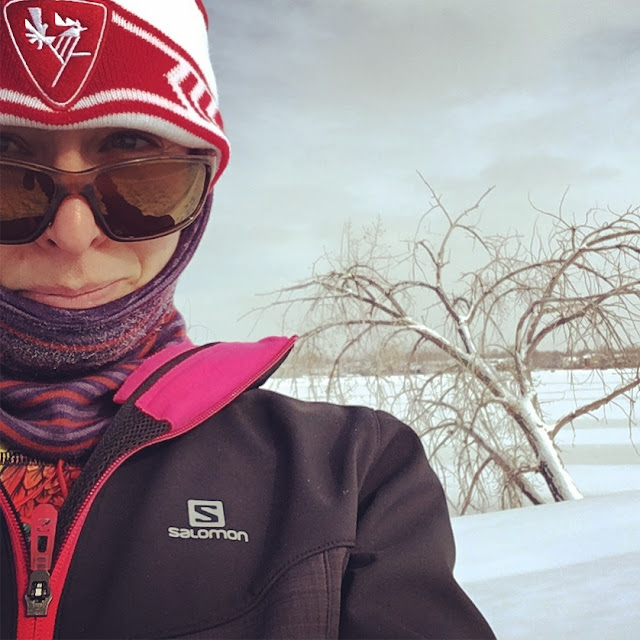 Did three miles and then went home for shower and lunch. Picked up A from her party and stopped at Sprouts and Yogurtland. Stayed up ridiculously late putting together the puzzle A had gotten for her birthday from GrandMo. 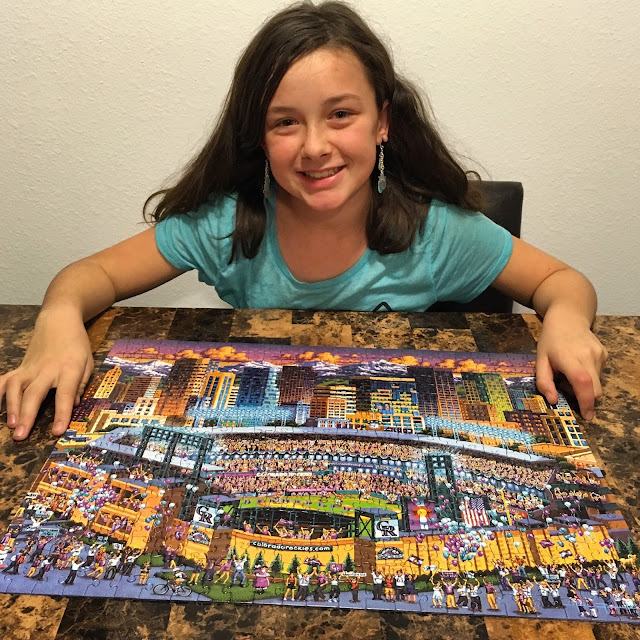 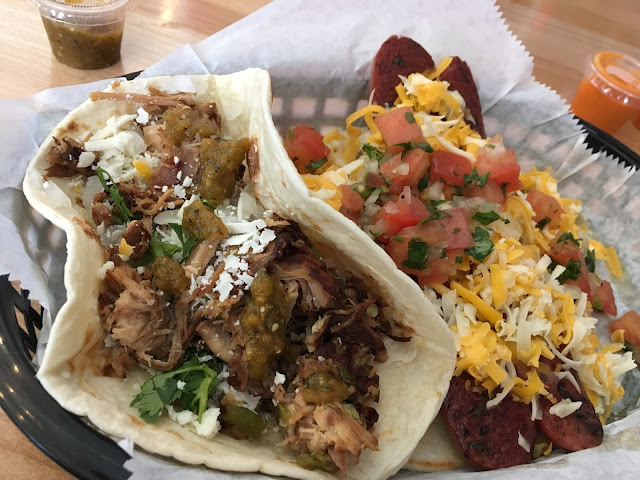 Went to Jump City and A finally braved doing a back handspring.


More TV And then barre. Quick change of clothes and then to the bowling alley for Jake's birthday. Took two hours to bowl one game. 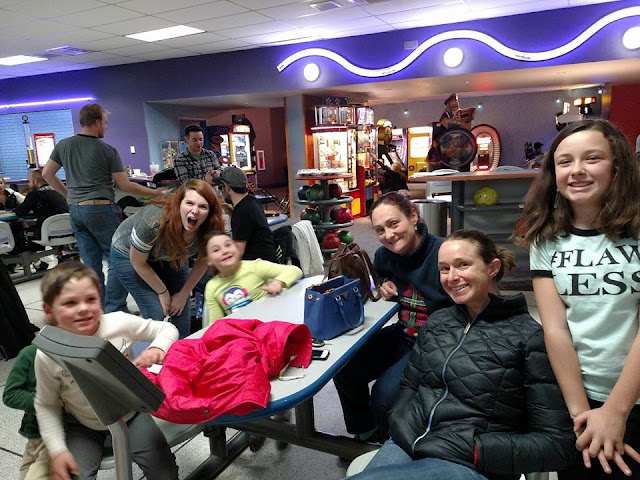 Monday (16,563 steps) - Picked up A from Scouts, where she had painted a really cool picture. 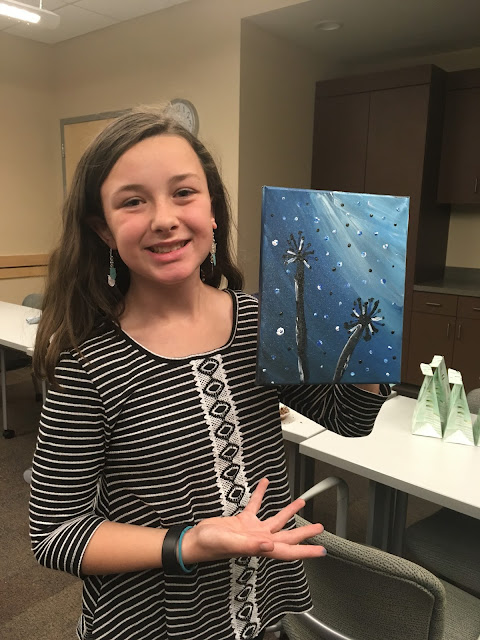 Then we headed down to Coohill's for Runners Roost holiday run. We of course got there late because traffic was horrendous. I ran a few miles with Colfax and then we socialized for a bit. As usual, the food was delicious, and the beer was great. 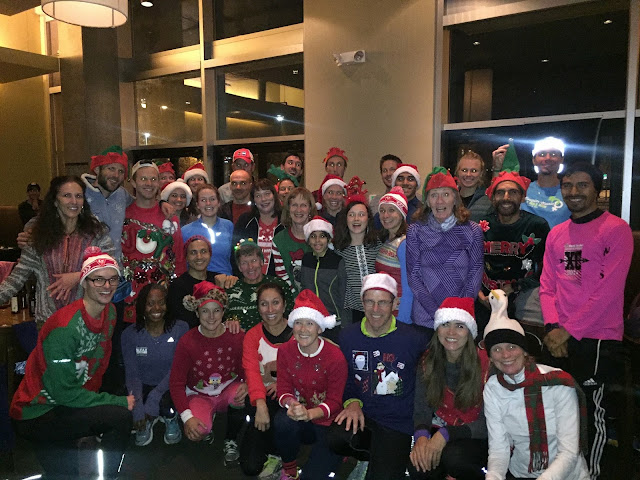 Stayed up too late watching the finale of Gilmore Girls.