After running the California International Marathon in the 2012 monsoon, Heather really wanted to run it again, in better weather. We were originally registered to run in 2015, but after a lack of training, we deferred to 2016.

A was already at Heather's house, I had taken her over the night before. I got up a bit later than I should have, made coffee, and drove to the off-site lot to drop off the car. I arrived at the airport a little over an hour before my flight, but security was a breeze, so it was no big deal. Charged my phone a bit before boarding, and even though I was in "B," managed to get a window seat in the second row. Now that Netflix has the download option, I was able to watch the Amanda Knox documentary and the first episode of Bates Motel. Both were good.

Heather had already landed and was waiting outside my gate. We took an Uber to the host hotel, the Sheraton across from the finish, and checked in. We went to the expo and picked up our packets without any issues.
Neither of us had eaten, so we walked to The Patio and got lunch. Mmmm, mac and cheese and cornbread. 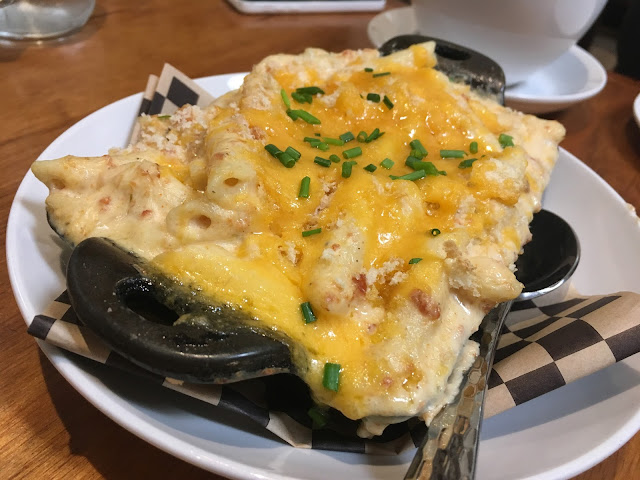 We were both pretty tired so we went back to the hotel and watched TV until about 5 when it was time to walk to meet some of my teammates for dinner at The Waterboy. The food was good, but it was a lot pricier (and more fancy) than I expected. Ah well.
Spent the rest of the evening getting gear ready and watching TV. Lights out around 9.

Alarm was set for 4:40. However, I hadn't slept well and had gotten up around 4:15. By the time the alarm went off I was ready to go. We made coffee in the room and walked down the street to the shuttle bus pick up at the convention center at 5:00 am. The bus ride sure seemed long, and NOTHING looked familiar. Had we really run this before??
We stayed on the bus until about 15 minutes before the race started. I had been using my addaday massager on my right calf all day Saturday because it was crazy tight and achy after my crazy training session with Junko on Thursday. We used the bathroom, I picked up gloves off the ground since I had accidentally left mine on the bus (wah!!) and squeezed in around the 5:08 pace group. 5:08 pace group? Such a weird time!
The first 5 or so miles were fine. We were running a fairly comfortable pace. I was pleased that my calf did not seem to be acting up. Shortly after the section aid station (maybe mile 5.5), Heather asked if I minded if we started a run/walk. I did not mind, and we began doing 4:1 intervals. This worked well for the next few miles. We saw Libby working the aid station at mile 8.4 (random to see a friend from Texas working an aid station in California), and kept going. We adjusted the run/walk a bit for aid stations and hills.
Turns out, Heather was NOT imagining chickens on the course (we saw them around mile 9 I think). Then, we saw a guy with two goats spectating. Of course we had to get a picture with them, HOW COULD YOU NOT?? We seemed a lot more excited than the goats, though.
There was  nice downhill after mile 10, and I made a comment that it was unfortunate that we had a walk break on the awesome downhill. That was when Heather told me that her left hip was bothering her and that running downhill was actually pretty painful. Uh oh. I've been there. I asked her if she wanted to walk a bit more, and she joked that maybe she would just quit. We did a few more intervals, and there was a climb near mile 12 where she said that she was indeed quitting. Oh no! I asked her if she was serious about quitting, if it was that bad. If she planned on just a lot of walking I had  no problems staying with her, but I did want to finish. She said the pain had spread to her IT band and that walking also hurt so she was going to walk to the relay exchange and stop. :(

Dang! Bummer! I told her I would text her later and hoped she felt better and moved on. I felt pretty good for a while, stopping around mile 16 to use the bathroom (the only one on the whole course that did not seem to have a line). Somewhere around mile 19 or so, my lack of road running and actual distance running caught up with me. I decided I would attempt to do intervals, running 5 or 6 minutes with a quick walk break.
This worked pretty good until maybe mile 23. I was really done by then. It was a lot colder than I had anticipated, and while I normally do really well in colder weather, I just felt... well, cold. I didn't want to put gloves on, but I kinda wished I had worn arm sleeves.
I sent Heather a text at mile 24 to let her know that I was close, and she said she would be near the finish line. The last mile of the course seemed to go on forever.
There was a big blue arch that you would THINK indicated the end, but NO. The sign right after said mile 26, yet when I crossed the finish line I was closer to 26.5. The race has the strangest finish line ever, with men and women finishing in different chutes. 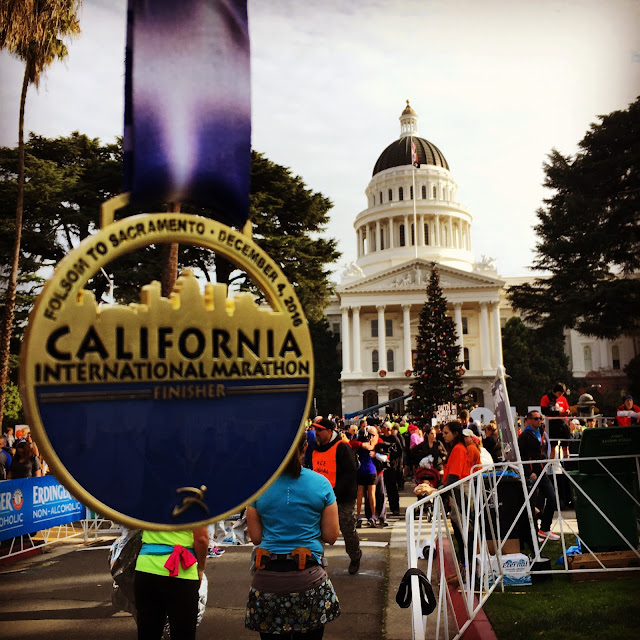 Got my medal and then met up with Heather. Thankfully, she had brought my jacket. We went and got some post-race food and beers before heading back to the hotel. I actually was not able to finish my brunch, which was weird because I was REALLY hungry the last few miles of the race.
Showered and checked out at 3:00. We didn't head to the airport until 5, and I was very sad to see my flight was delayed. By the time I got to the airport, picked up A, and got home it was 1:20 in the morning.  Blah.