A and I had registered for the Broomfield Turkey Day 10K in January. Because it totally makes sense to sign up for a race 10 months in advance if it's cheaper, right?

I had run the 10K a few times when A was smaller and not racing, and last year, A and I ran the 5K with Heather in the freezing cold ice and snow. A had chosen to do the 10K this year, and I was a bit concerned since she hadn't been running that much. As the date approached, I remember asking her "you know you wanted to run the 10K, right?" She seemed fine.

The race didn't start until 9:00, and only being about 15 minutes away, we didn't have to get up that early. We were out the door by 7:45 and parked by 8. First thing of note - IT WAS FREAKING WINDY. We sat in the car for a few minutes until we decided we might as well pick up our bibs. The line was pretty long and as soon as we got our numbers we went back to the car and turned on the heater.

Shockingly, Heather had gotten lost getting to the race, so we didn't meet up until about 10 minutes before the race started, in the bathroom line. We all planned to run together, and luckily, by the time we started the wind died down a bit.
The 10K was not the same course I had run (3?) years ago, it was now a double loop course (and I think reverse direction of the 5K we ran last year. Anyway, the first aid station was about a mile in. We took a drink, and walked a bit. The next section, along Midway, was a gradual uphill and a headwind. 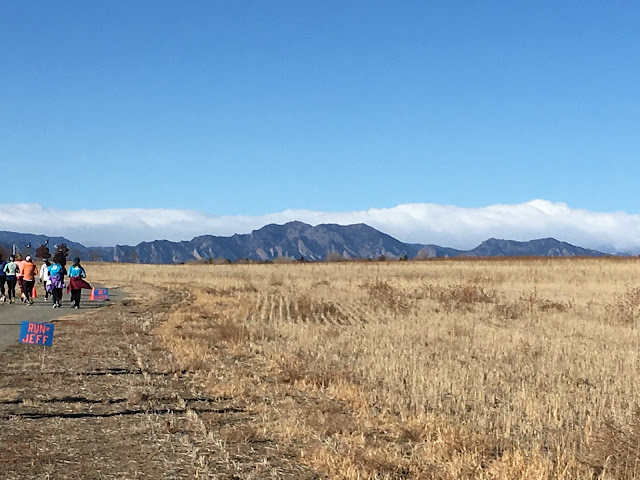 A started to lose steam on the gradual hill up Sheridan, but I reminded her that the sooner we got done running, the sooner we could leave to go to Friendsgiving for #allthefood and pumpkin cheesecake. There was only the one aid station on the course, so we didn't get more water until after mile 4. It had warmed up, so I had taken off my hoodie (and felt fine). Around mile 5, A was a few yards ahead of me and Heather, and I looked at my watch and realized that as long as she kept moving, she would get a decent PR. She did pretty well running from miles 5-6 and then took a walk break right as we were turning the corner at mile 6. Then she looked at me and Heather and bolted off. Even with my "sprint," she still beat us by a decent amount. She is really fast when she wants to be.

We saw Lisa in the finisher area, got our medals, and then got a random stranger to get a team picture. Heather and Lisa both had to head out pretty quickly, but A and I stuck around a bit trying to get her official time. We finally just grabbed some free Noosa (pumpkin and blackberry serrano) and then headed home. 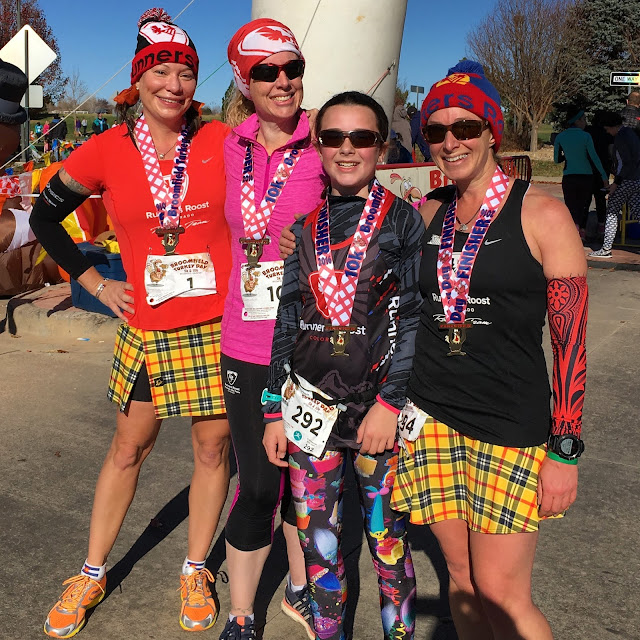 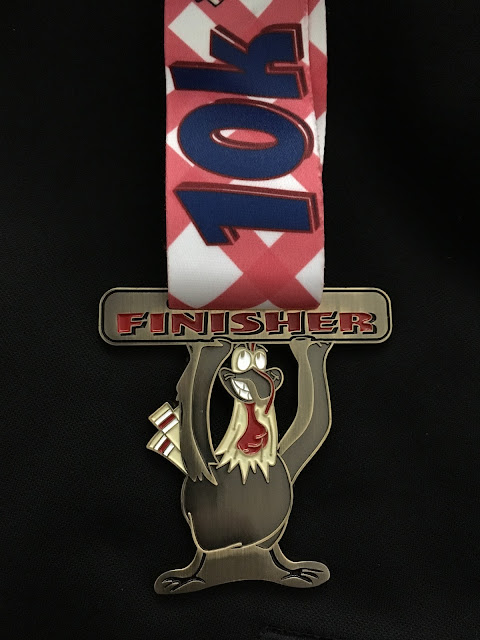