Somehow this got away from me last week, so I'll just combine a few weeks. Blogging wasn't always this complicated...

Tuesday (18,573 steps) - Took another rest day. I did, however, do a long yoga video instead. Turns out, even if I complete a super slow ultra, I'M TIRED. No plans for the evening, but found out that it was "National Grilled Cheese Day," so A and I went to Village Inn for dinner. I was thoroughly UNIMPRESSED. I also ordered soup - which was lukewarm and had a hair in it. Sandwich I had to send back because the cheese wasn't even melted. At least it was a kids eat free night, so that made it sorta worth it. 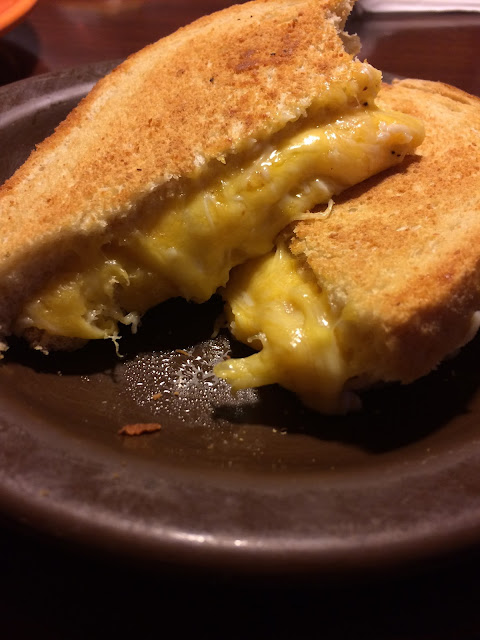 Wednesday (20,028 steps) - Skipped a morning run (again) and did a lower body video. After work we went to run club. Totally bamboozled by Runner's Roost with a mini ceremony at the start acknowledging A's accomplishment at 24 Hours of Palmer Lake. They gave her an honorary MUT Roost team shirt, a hat and buff from Salomon, a Nothing Bundt Cake, a package of Oreos (because she loves them, of course), flowers, AND a season pass to Elitch's. I wish I had the foresight to videotape it. It was so unexpected and touching. I love my running community so much!!! 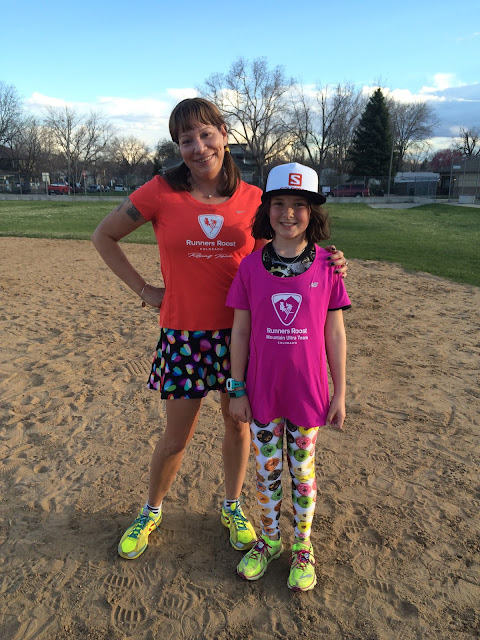 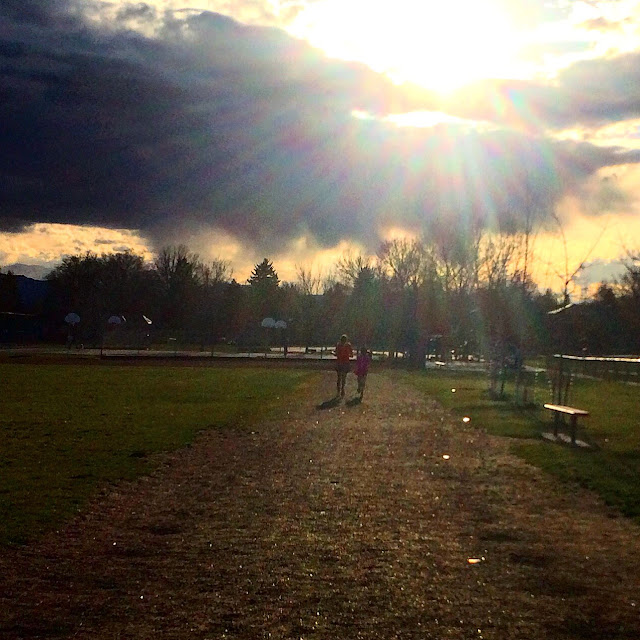 Heather finally started to run a bit this week and we jogged over to the track and did three miles. Such a fun night. We went to dinner at Noodles with Dan and Heather. 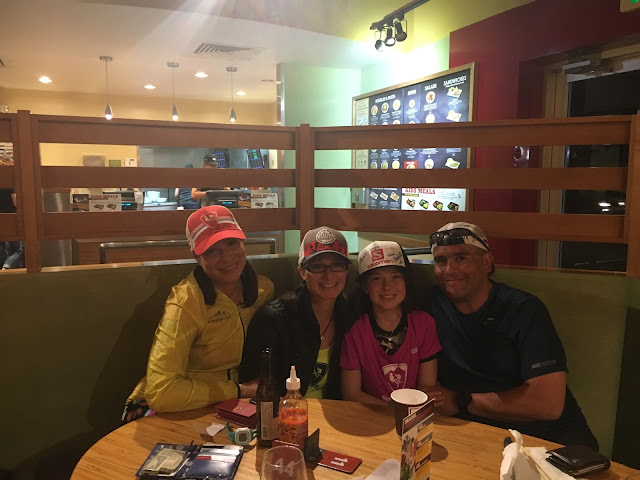 Thursday (20,439 steps) - A dry and unseasonably warm morning (no jacket!) and I decided to run along the lake since we have a bunch of snow in the forecast and wanted to get in some dirt before it got muddy. 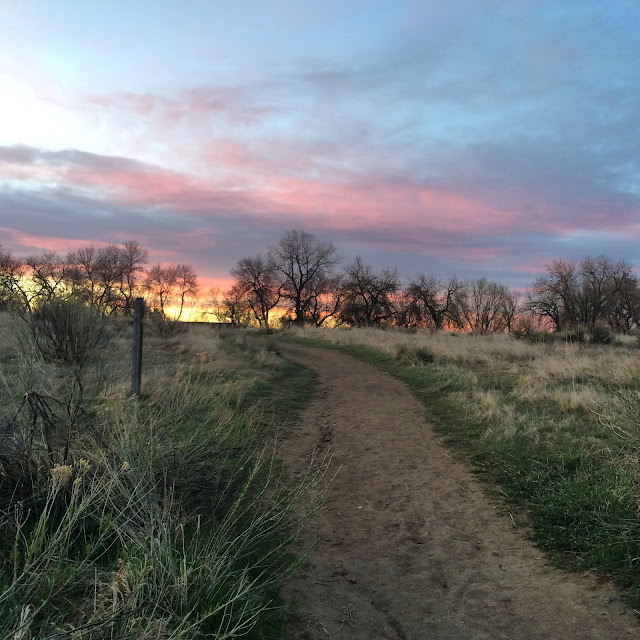 Got a few minutes of yoga in. A had gymnastics and Tokyo Joe's for dinner.
Friday (19,596 steps) - Normally a rest day, but really want to get a run in before the weather hit, so I did a short loop around the neighborhood. Another day where no coat was needed, but I could definitely tell a cold front was coming in. 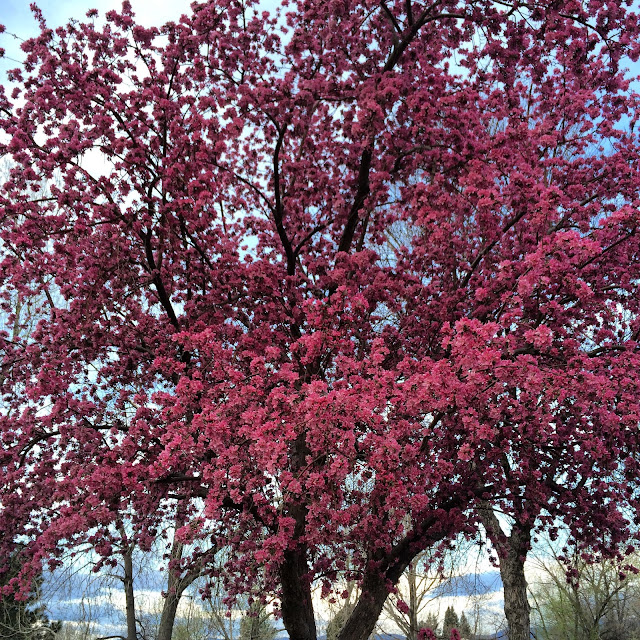 Almost stopped at the store after work, but people were already preparing for the Snowpocalypse, so we just got some dessert at Kneaders instead. In bed early.
Saturday (18,514 steps) - I had my alarm set with the intent to go to the Runner's Edge group run and get anywhere between 8 and 12 miles in. Within minutes of waking up I received the email that the run was canceled due to weather. So instead, I went back to bed and didn't get up until almost 9. LAZY. A and I watched TV for a few hours, gorged ourselves at IHOP for a late breakfast, and then went to see Kung Fu Panda 3. Eventually went for a 5ish mile run in the basement inferno. Also did a lower body video and some stretching. Went to bed early because I had a headache all afternoon that I just could not shake. Snowed all day, and all night.
Sunday (17,775 steps) - Pretty much the only other day in the foreseeable future that I didn't have to wake up early. Sadly, I just could not sleep past 7. Such a failure!! Looked outside and saw it was still snowing, and we had a decent amount of accumulation overnight (although no where NEAR what other areas around town got). A made Andes chocolate mint chip pancakes for breakfast. Did an upper body video, and then we went roller skating for a bit. 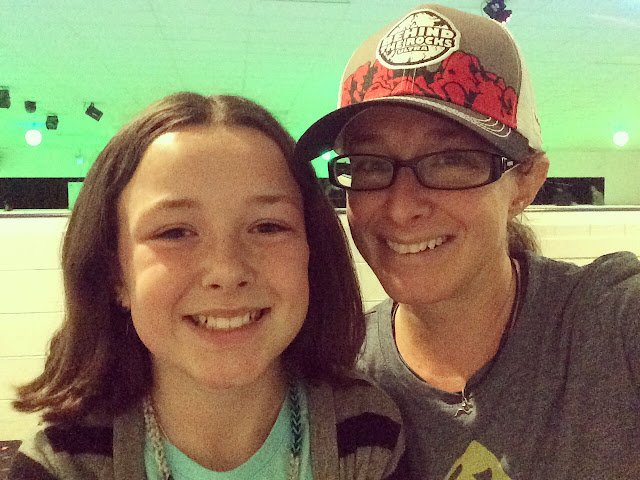 Picked up pho for a late lunch, and then binge watched TV and napped until I went out for a short run. 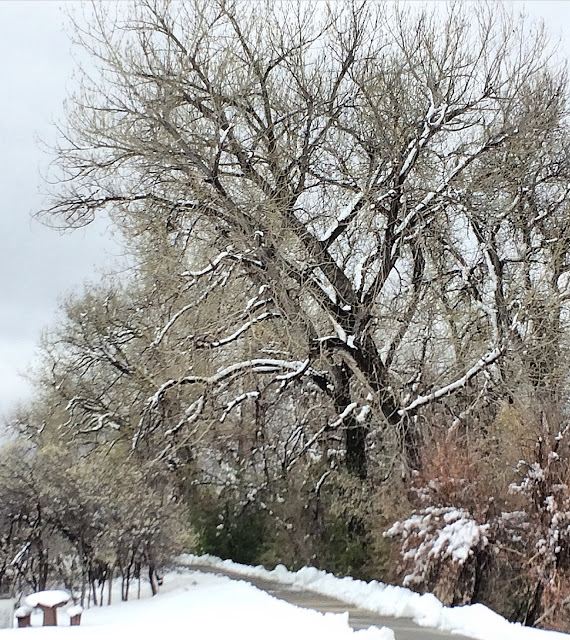 Only one area was slushy, the rest was relatively dry. Only in Denver can it snow for 36 hours straight and the roads be dry almost immediately. Not complaining, it was great. A joined me for a yoga/stretching video, but otherwise, most of the evening was spent on the couch. LAZY WEEKEND.
Monday (9,708 steps) - Alarm set, but didn't feel like getting up, so I didn't. Man, I'm really taking this taper business seriously. With Heather being injured, we are no longer running the marathon, and I certainly don't need to run a ton for a half. Instead, I'm catching up on all that sleep I've been missing lately. Took A to school a bit early, and then went to Runner's Roost for about an hour for the Boston Marathon viewing party. It was a lot of fun and I was wishing that I didn't have to go to work. Nothing else.
Tuesday (16,061 steps) - Slept in. Again. This is getting way too easy to do. Did a loop around the neighborhood after work. Nothing else. 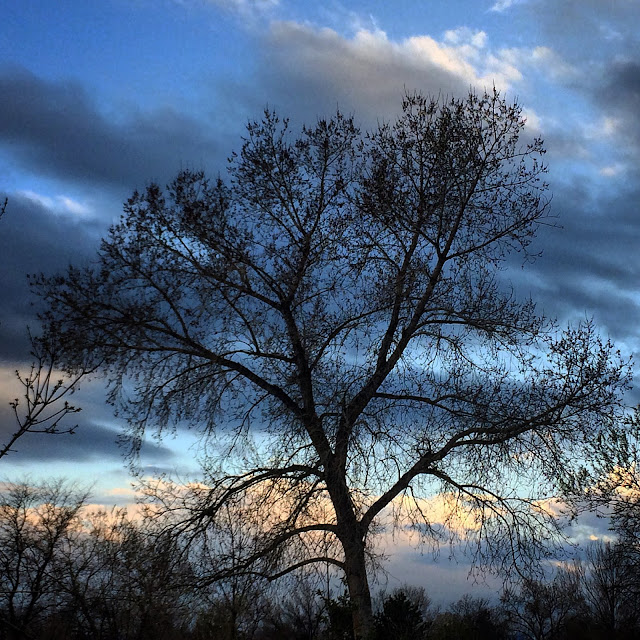 Wednesday (15,312 steps) - Slept in, but only because I had plans of going to run club. BUSY day, most of which did not involve actually being at work. A had her awards ceremony in the morning (for being in the art show): 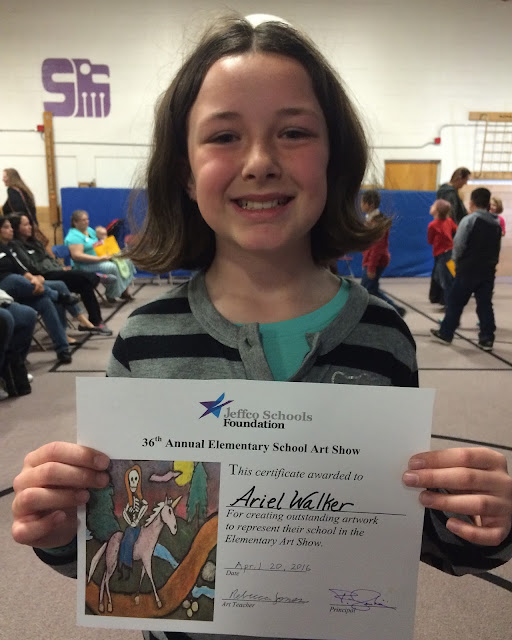 Had a secretary meeting that ate up my lunch hour, then I had to go to my lasik pre-op appointment. Everything still looking good for Friday! Traffic was a nightmare getting A after work, as well as driving into Denver for run club. We still got in a few miles and of course had a great evening. We went out to dinner with Heather at Noodles & Company (again).
Thursday (23,838 steps) - Since I haven't been running, and wouldn't be getting a long run in over the weekend, I actually got up and did 7ish miles before work. 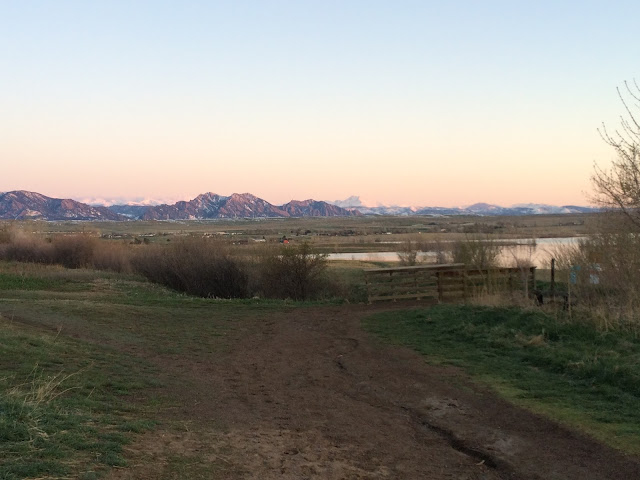 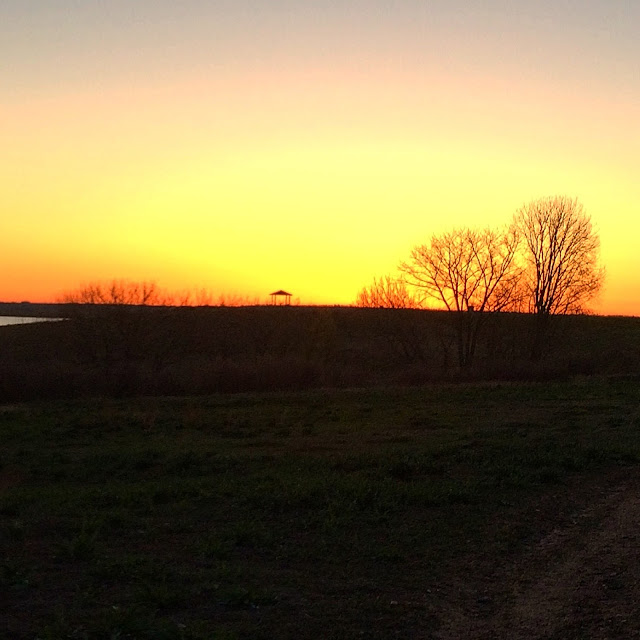 It was a pleasant run, and I did a bit on the trails, although they were still muddy from the snow we had over the weekend. Bah. Gymnastics and Tokyo Joe's after work.
Friday (11,381 steps) - Last run in glasses!!! 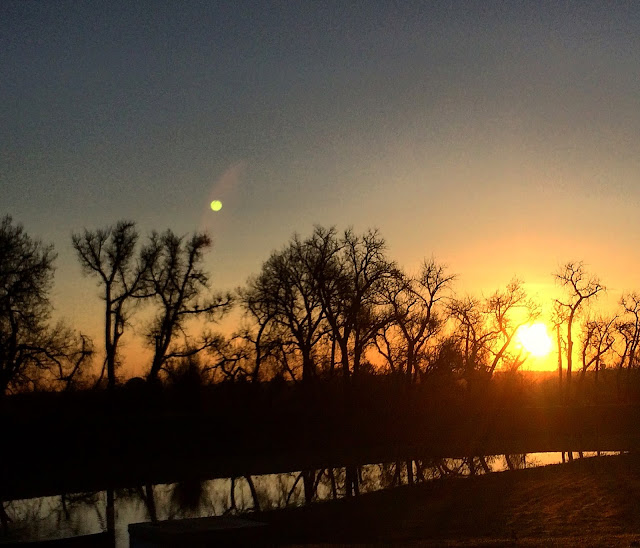 Run around the neighborhood and then dropped A off at school and then went to Heather's house so she could take me to my lasik appointment. Everything went well and the remainder of my day was spent dozing on Heather's couch. 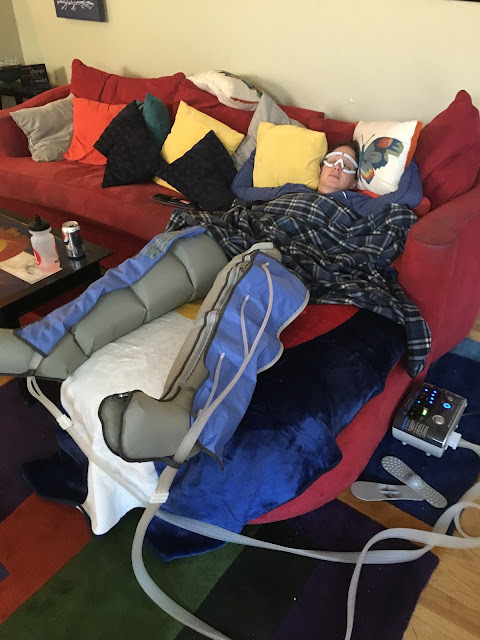 We picked up A after school, ordered pizza and started on the Cherry Creek Sneak after party decorations.
Saturday (15,765 steps) - Up earlier than we needed to be. Stopped at IHOP for breakfast on the way to my post-op appointment. It's crazy to me that 24 hours after having LASERS in my eyes that I'm cleared to drive... Everything looked good, yay! Headed up north for a quick jog (yes, I was cleared to do this), then took A to her very first soccer game I haven't had much of an opportunity to watch her play, but, she is really good! 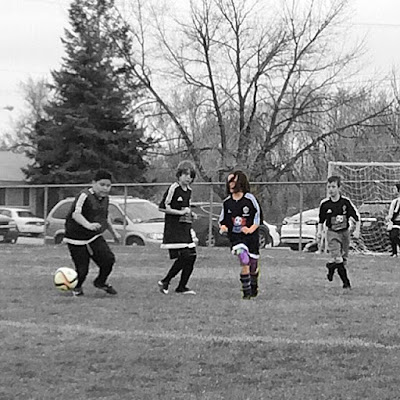 Quick stop at home for showers and taking care of the kitties. Stopped at Elitch's to pick up our season passes, then headed back to Heather's house. More party decorating, and a trip to California Pizza Kitchen for dinner. My eyes were pretty tired so I rested a lot on the couch.
Sunday (14,208 steps) - Up EARLY for the Sneak party! People started dropping by around 7 am. There was still quite a bit to do, getting food ready, taking out the trash, etc. Ended up partying until about 1 pm. I am too old for this.
A and I went to Elitch's, having enough time for a few roller coasters 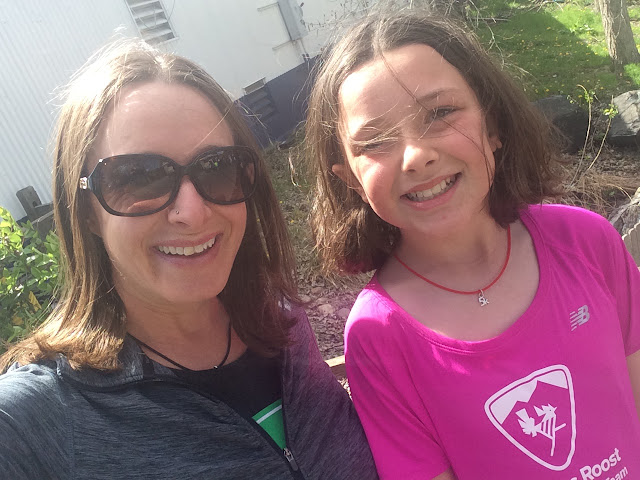 THEN, headed over to Green Mountain for Roost Lakewood's "Trails and Ales." I wasn't really prepared for a run (no running sunglasses, no sports bra, no trail shoes, no water). I did a short 2 mile out and back - and it was GORGEOUS. 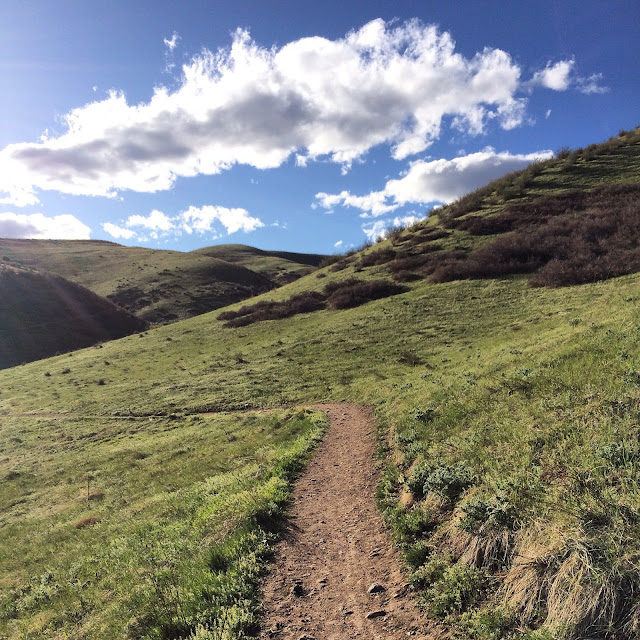 A went with Maureen and Colfax for a hike up to the summit.
We then went to Westrail Tap & Grill for a beer and THE MOST GIANT PLATTER OF NACHOS EVER. 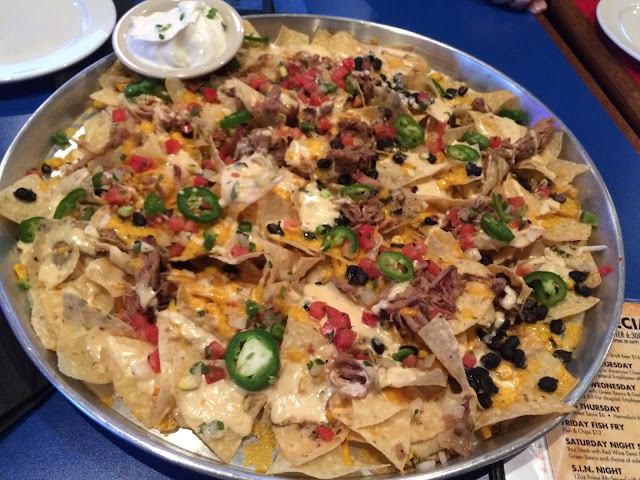 So exhausted. Pretty much went to bed as soon as I got home.
Monday (14,283 steps) - Enjoyed getting sleep and didn't get up early. We have been having wasps sneak between our storm door and main door, so after work we made a trip to Home Depot to get something to seal up the doors better. Our neighbors came over and helped, but turns out that what we really need is some gorilla glue. We will have to go back another night to get this fixed.