Behind the Rocks 50k (Race Recap)

I was SO BUMMED when I learned that the 24 Hours of Utah race was no more. I love Moab so much, and I was desperate to find another race to replace my beloved race. It didn't take long for me to find the Behind the Rocks 50k, only a week later in the year than my other race. Put on by Mad Moose Events, the event was affordable - using a promo, I paid just over $70, having signed up on August 1.

I set my alarm for 5:05, with plans to be out the door by 5:30. Ben and I were the only ones running, and we apparently are both low maintenance, as we were out the door on time. I had my honey stinger waffle ready for breakfast, but Ben wanted to stop and get something (I also wanted coffee). NOTHING is open at that hour in Moab, except the gas station. I was really glad that Ben was driving since I would NEVER have been able to find the turn off.

The start line was about 13 miles south of town, off a two lane road in pitch blackness, and then a mile or two on dirt road that would have devastated Bee Rad. So thankfully, I didn't drive. I had already picked up my packet, so I had no plans other than to use the bathroom before the start. We arrived just after 6 am. There were lots of folks camping and we had missed the start of the 50 mile race by minutes.

We ended up starting just a few minutes late because Ben was still pinning on his bib and getting his fluids ready - not late because of the race itself. I planned on wearing my YMX top all day under my Roost tee because I remember how blazing hot the desert sun gets and I didn't want to 1). have to worry about applying sunscreen and/or 2). getting burned on my shoulders.

Starting in the very back is not brand new to me. I've crossed the line last plenty of times, and I don't mind. I kind of like seeing who my competition is for "the bottom 10%." It was at least a mile, maybe two, before I passed my first runner. I felt like I was barely moving, yet even taking it easy, my pace wasn't too appalling. My calves ached a bit, as did my right heel/foot. I was hoping it wasn't going to be "one of those days." 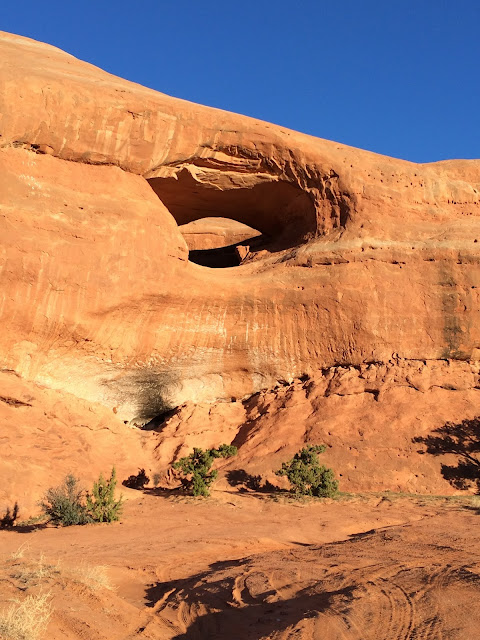 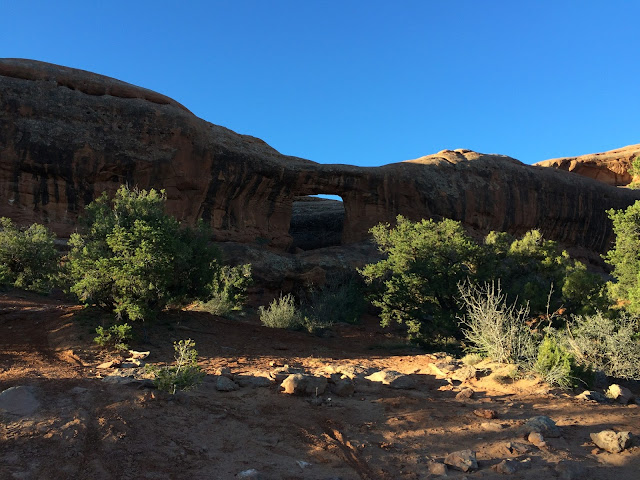 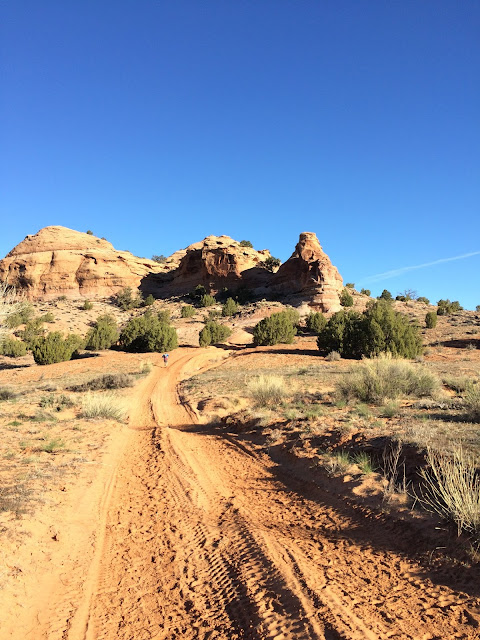 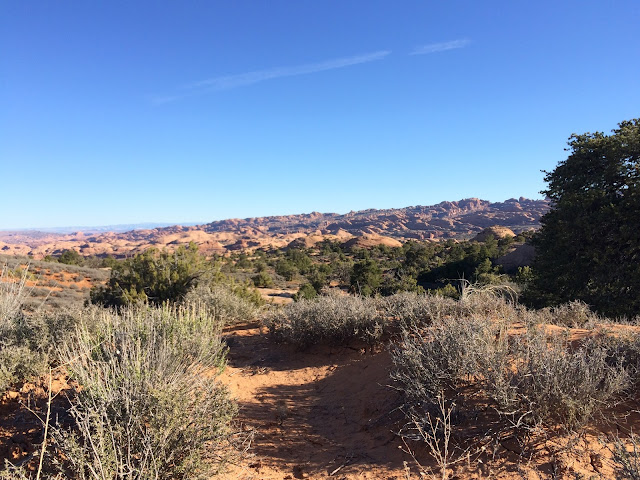 I had NOT looked at the course/aid stations at ALL prior to the event, so I really had no idea what was happening. After 3-4 miles everything started to loosen up and I felt pretty good. I had to "go" on the side of the trail somewhere around 5 or so miles, then I really felt a lot better. Came into the first aid station around mile 6(?). The guy at the aid station mumbled something about the next aid station - I spent the next few hours wondering if he said "AT about 10 or IN about 10." FYI - IN about 10...
Nothing sounded good so I just grabbed some coke and a few chips and headed out. I think by this point I had passed three people.  First big climb of the day, but I actually managed to jog some of it. The course was very well marked with blue flags and signage. There was a pretty big drop and I was thinking "this is going to be AWFUL on the way back" (thankfully, since I hadn't looked at the course, I didn't know I would NOT be going back that same way). Anyway, running pretty good. 30K course split off and then the 50M and 50K headed to the right (north?). 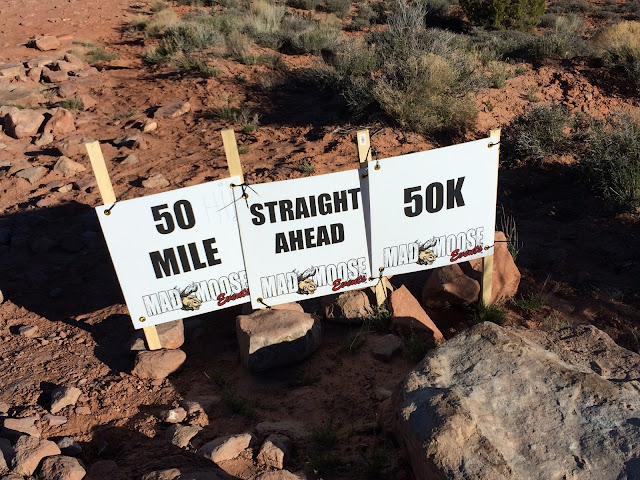 I was following one other runner, and this was the only confusing marking of the course. Straight ahead it said wrong way, but both to the left and right it had arrows... thankfully, he chose correctly (eek, I should really read course maps). 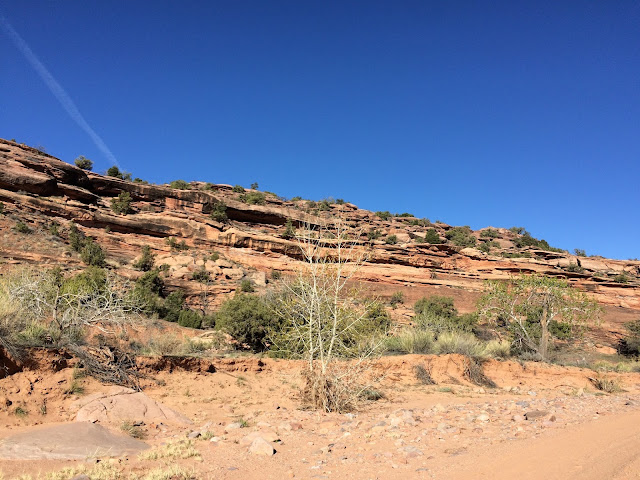 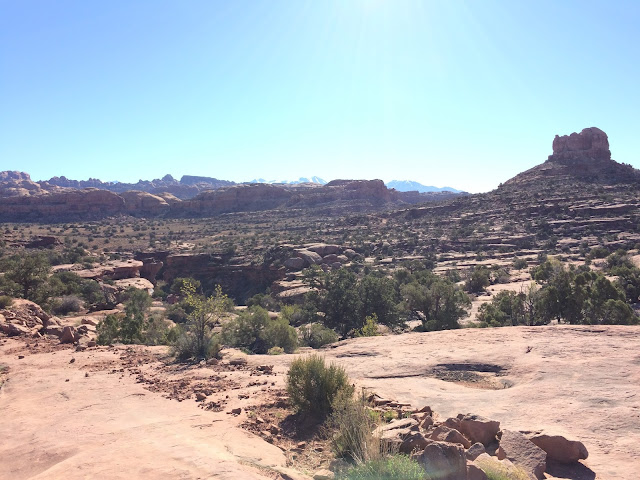 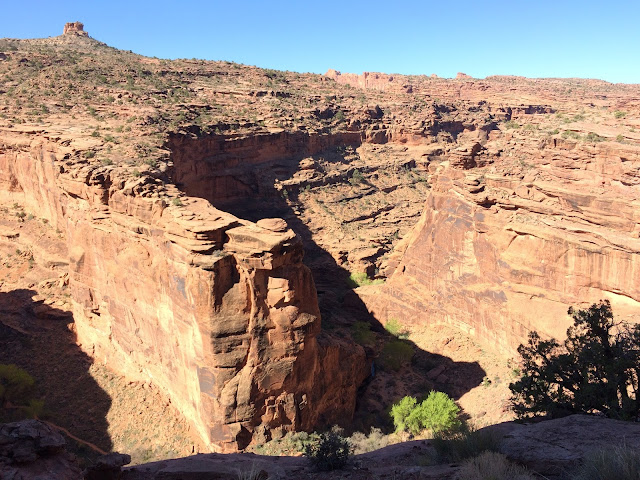 This next section had quite a bit of climbing, but I still think I ran up 2/3 to 3/4 of it. I was around mile 13 on my watch when I saw Ben heading down towards me. I was wondering... when is all the climbing going to happen?? There was a nice section of single track that felt like a gradual downhill to me. As time ticked by, there seemed to be more scrambling, more sliding down rocks... and then I realized where I was... I the aid station was going to be in the valley. F@&^. There was a SUPER SKETCHY section where I really had to watch my step, and a few rock sections that were pretty scary. Finally got to the bottom, checked in, had some coke and a pickle, and then headed back up the terrible-ness. That whole section totally killed my running mojo! 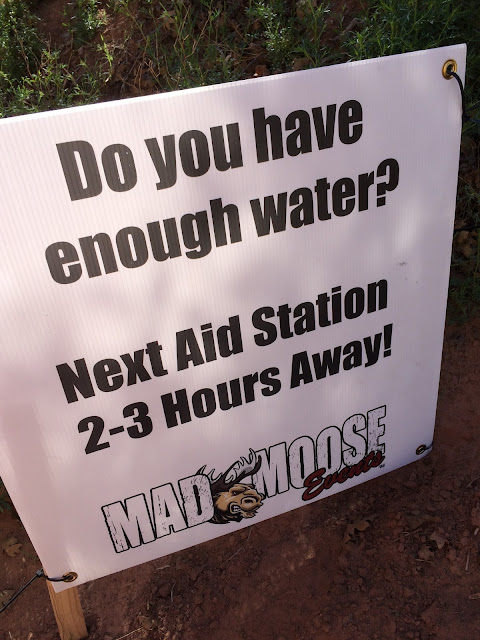 There were some sections that I had to climb back up that I could barely get my leg up high enough to get to the next rock and no real hand-holds to get up. So happy I didn't fall and die! Got back up to the rim/crest and I was thinking to myself... "this section should be slightly downhill" - it's like I for real have amnesia. My foot was hurting more, I was SO HOT, and I felt slightly light-headed. It did NOT seem slightly downhill. 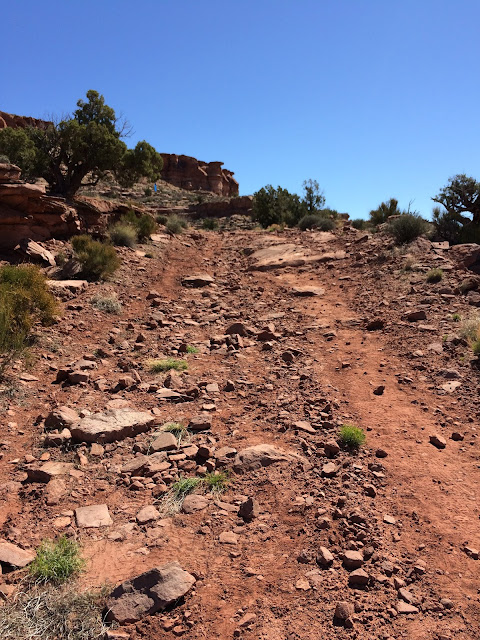 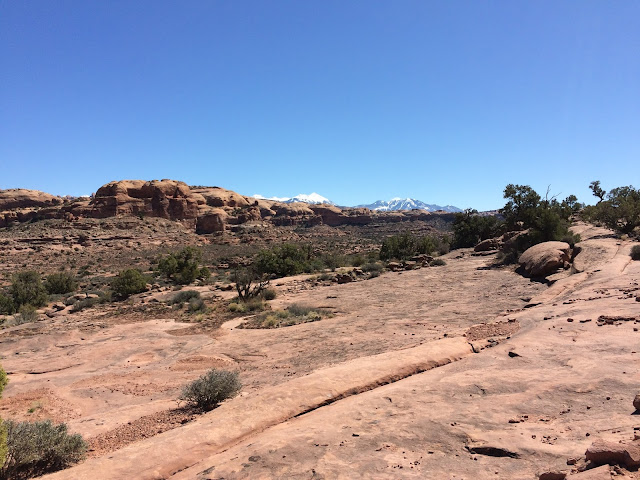 Arrived at the fork in the right and went straight - and there was SO MUCH MORE CLIMBING. So hot. 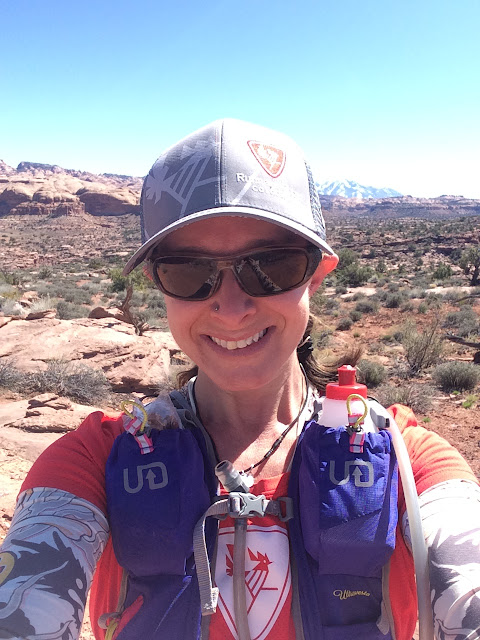 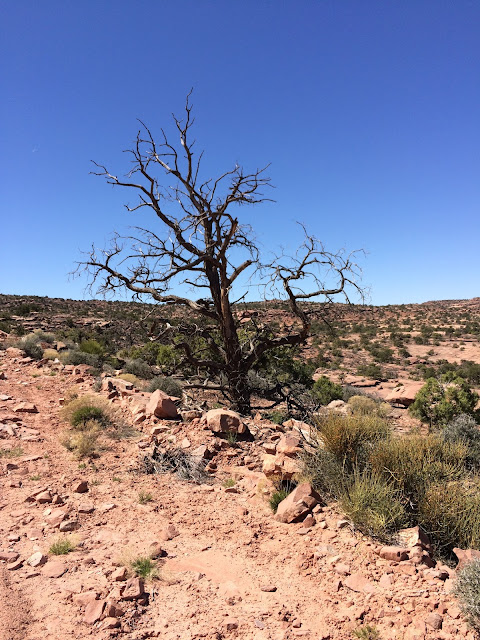 I passed a few more people and then got to aid station 3, somewhere around mile 24? Put coke in one of my bottles, and then ran a few miles with a man and woman from Blanding, UT. Made the time go by a bit faster. Wasn't expected another aid station, but there ended up being one about 4 miles from the finish.

I ran the remainder of miles by myself. My foot was really hurting, and it was so hot (did I mention that?) The one thing that I did remember from the website was that the course would be long (32.9 miles, supposedly), so I wasn't super upset when my watch hit the 31 mile mark and kept going...

I was able to see the finish area for quite a while, and really wanted to run in strong. I was just exhausted. Started jogging maybe 100 yards from the finish line, and Ben ran up to get some pictures of me crossing. Pretty happy to be done with this one! 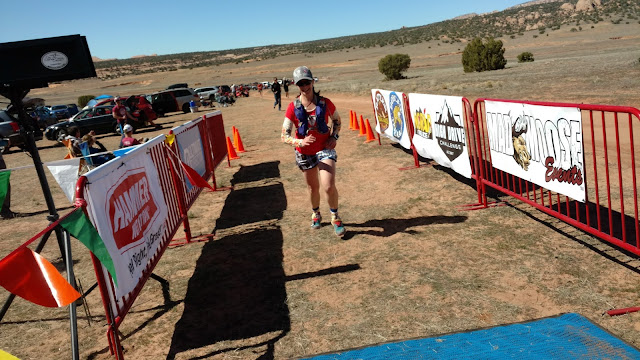 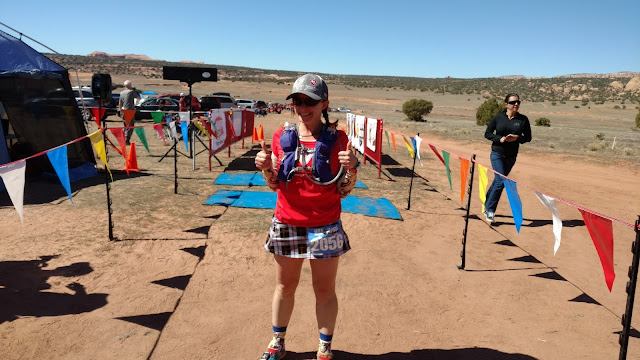 Ben had some camping chairs set up under a tent and handed me a beer while I did some unwinding. What a great way to end the day!