Tuesday (21,783 steps) - Impending Snowpocalypse meant sleeping in. I did a quick yoga video and then dropped A off at a friend's house since SHE got a snow day and I had to work.

6ish miles on the treadmill during my lunch break. Went out briefly to sell Girl Scout cookies, hoping for some sympathy sales (yes, we got a few, but WOW, it's COLD and people don't shovel their driveways or sidewalks!)
Wednesday (18,588 steps) - Tried to brave heading outside since two days on the treadmill was TOO MUCH. It was a freezing cold terrible 3ish mile disaster. The snow was super deep, but at least it wasn't icy? Nothing had been plowed yet. 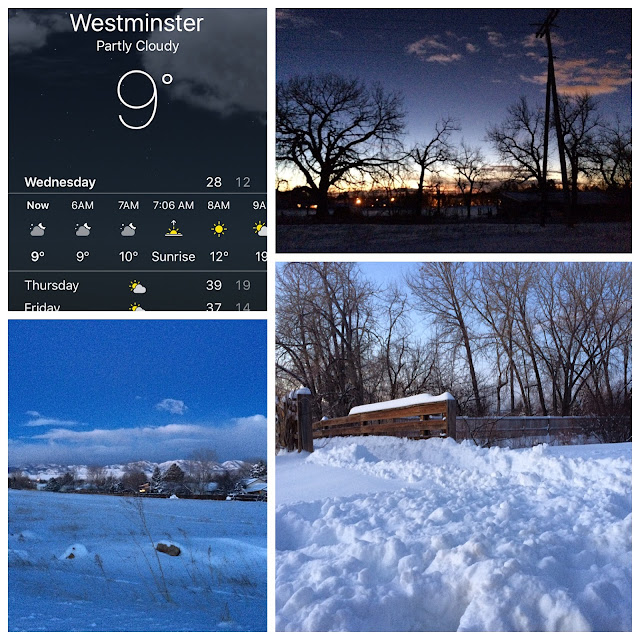 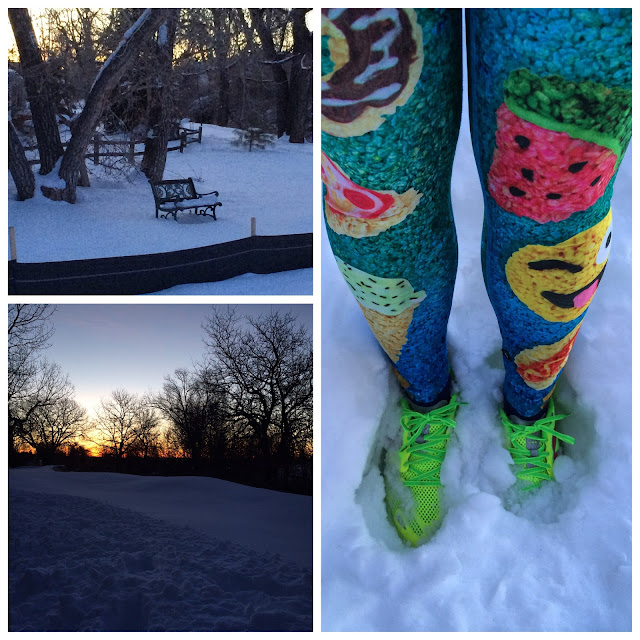 After work I picked up A and we headed up to Louisville Runners Roost for an ERS ambassador meeting. It was an incredible event! Food, beer, and TONS of merchandise from vendors/sponsors.
By the time we got home it was a crazy whirlwind of trying to get everything packed for our trip. I haven't really mentioned the trip, but basically, Heather and Maureen had plans on running Surf City in Huntington Beach, California. I was already registered for the Ralston Creek half marathon and didn't have the funds or resources to bring A with me, so I declined the initial invite. After Heather was able to secure the family jet and beach house for the weekend, INSISTING that A was welcome to come and could hang out with her non-running friend that was coming while we raced, I of course decided to join in the "Girls Only" weekend.
Friday (12,946 steps) - Last minute packing, dropped A off at school and then I went to work, but only for a few hours.
Left work just before noon to pick up A and head over to Heather's house so I could follow her and the other Heather (we called her "H2" to keep confusion at a minimum) to Centennial airport for our flight to SoCal. We made a brief stop at Einstein's for lunch to eat on the plane. I have never flown on a private jet... what an experience this all was! We literally parked (or got the car valeted) about 12 feet from the plane. I sat in the back with H2 and we had a great time getting to know each other. The flight went by super fast.
We were picked up by a limo service (a big van/bus) and the drive to Heather's place in Newport Beach only took maybe 20 minutes.
We had a quick tour of the house, and then we decided to get dinner. 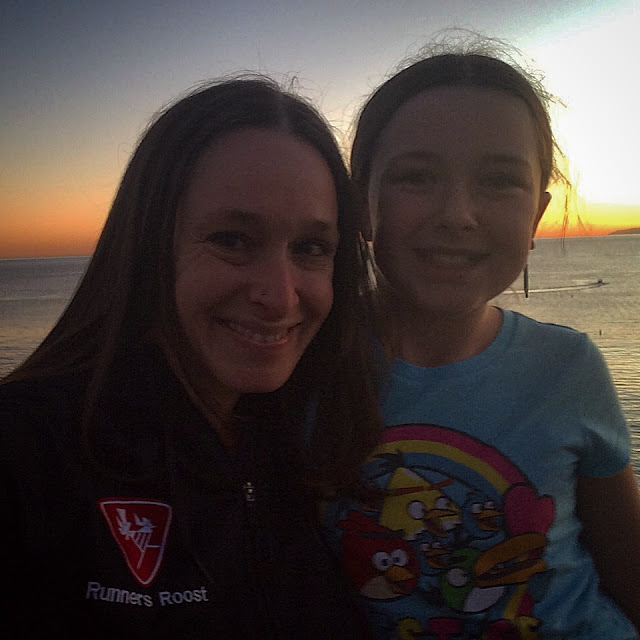 We stopped at Inspiration Point to watch the sunset and then to Yard House at Fashion Island where I had a delicious grilled cheese sandwich and sweet potato fries. We stayed up pretty late playing Apples to Apples. Because, California.
Saturday (22,363 steps) - Up fairly early (all things considered). Tried to go to a French restaurant in the harbor, but it was closed. Instead we went to a diner that had the most amazing cinnamon french toast. I #ateallthethings.
We went to the expo in the morning before heading over to the beach in the afternoon. 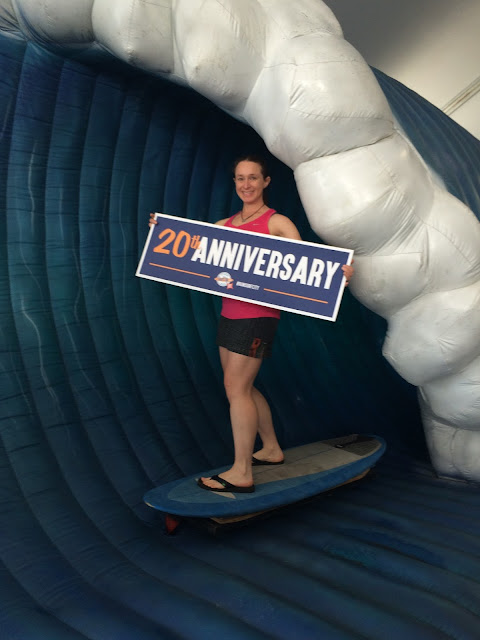 We had a great time doing a barefoot run and playing in the water. 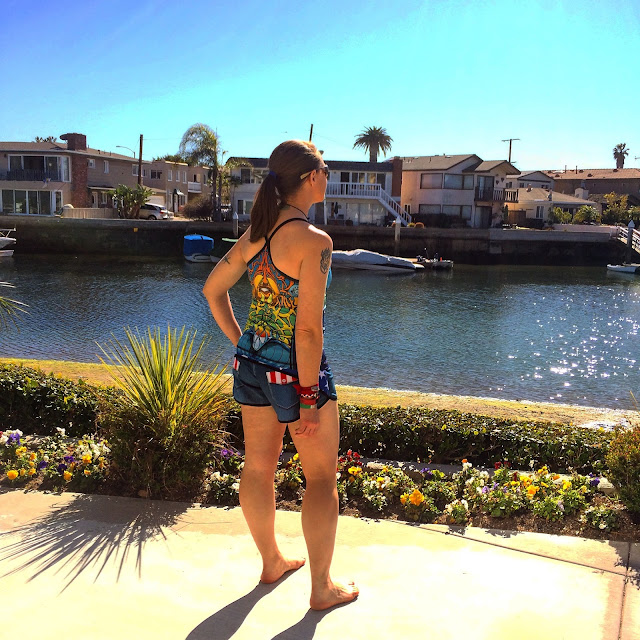 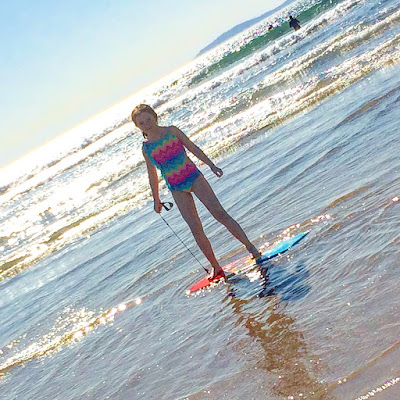 Stopped at the store to stock up on groceries for the weekend and the Super Bowl extravaganza. H2 made a delicious salad and pasta dinner for all of us. In bed fairly early after playing Scattegories for a bit. Ever played it? So fun.
Sunday (31,470 steps) - Surf City half marathon.
We headed back to the house and found that A and H2 had prepared some fresh cut fruit for us to snack on while A made us all breakfast. (Seriously, she made a menu and made toasted bagels and omelettes for us all). 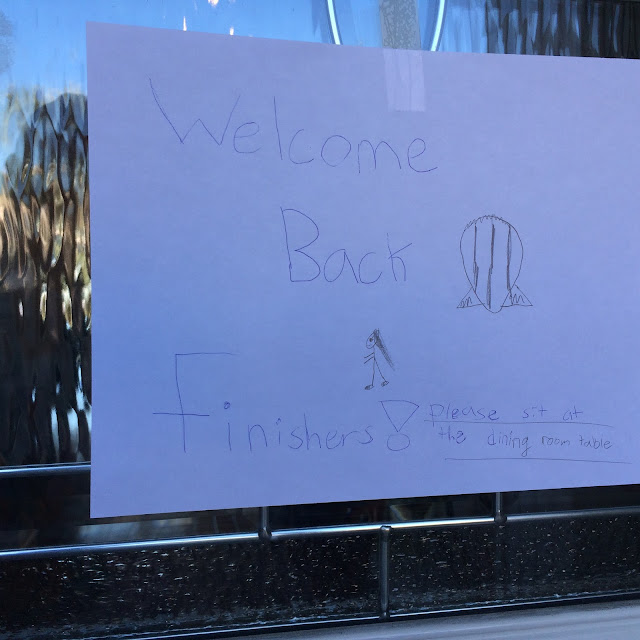 After we all showered and ate we got ready for the big game!
The Super Bowl was the most fun I think I have ever had. We screamed and yelled at the tv, drank beer, and ate the most food ever. It was the most exhausting day of my life and I think I went to bed at 9.
Monday (16,784 steps) - Up fairly early to meet California BFF Heather for breakfast!! She found an awesome place called Pancakes R Us. She had to go to work, so she dropped us off at the house. We immediately left for one more day at the beach (and another barefoot run). 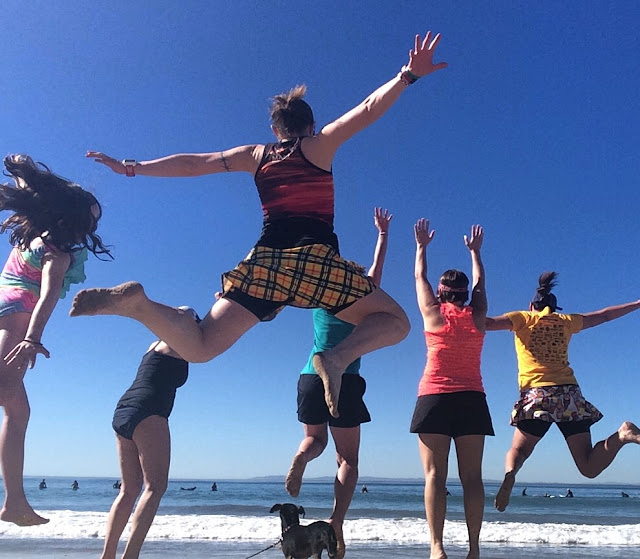 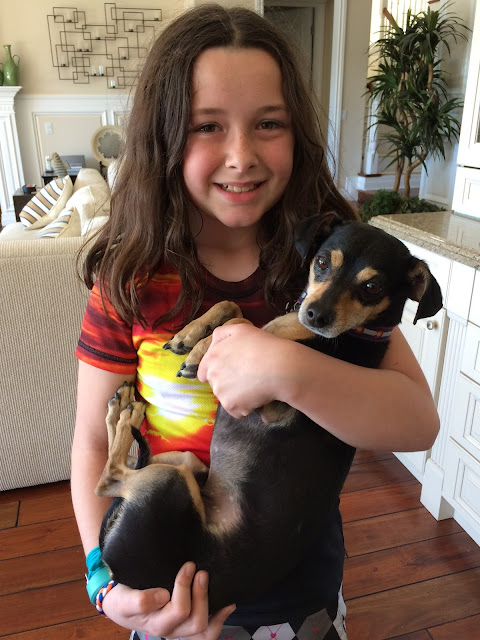 We had just a short amount of time before the limo came to take us to the airport (although we had the driver stop at In N Out burger on the way). Flight back was just as (if not more) fun than the way out.
When we landed, our cars were waiting for us (heater running and trunks open). I may never be able to fly commercial again... By the time we got home we barely had time to do some homework and unpack. Most fun girl's weekend EVER.