Saturday, May 3
Brighton, CO
Half Marathon #105
Colorado Half #41
Weather - Sunny and warm 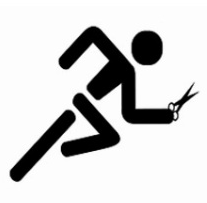 I somehow found the Runs With Scissors half marathon when I was looking for an ultra marathon. There wasn't too much information on the race, but obviously, we had to run it. A very affordable opening registration fee of $40, but by the time I signed up it was $50 (still very reasonable).

The race director, William Morton, had a basic, yet informative website set up, and sent out pre-race emails that were humorous and informative. As per the norm, I had not bothered to read much about the race itself, so when L told me the course was 10 1.31 mile loops I was not exactly surprised.

The week of the race we had been having a cold front, with 4-5 very windy and chilly days (highs in the low 50's). Of course, by the time race day rolled around, it was warmer than that when we left the house just before 6:00. The race started near the Adams County Fairgrounds, and we made excellent time getting there. We walked over to the pavilion to get our bibs and found out we had already won door prizes. The RD had also made name tags for our backs so we could "cheer people on" -- best race ever!! We moved our car closer to the starting line, cycled through the bathroom line twice, and spent the time leading up to the start chatting with Ross about our upcoming races.

Race started on time, at 7:00. It was already sunny, and hot. My legs were tired from the beginning on what was promised to be a "flat" course for Colorado. It WAS mostly flat, although arguably, it felt uphill to me at the start of every loop. As soon as we crossed the entrance to the parking lot, we were on some packed dirt "trail" - 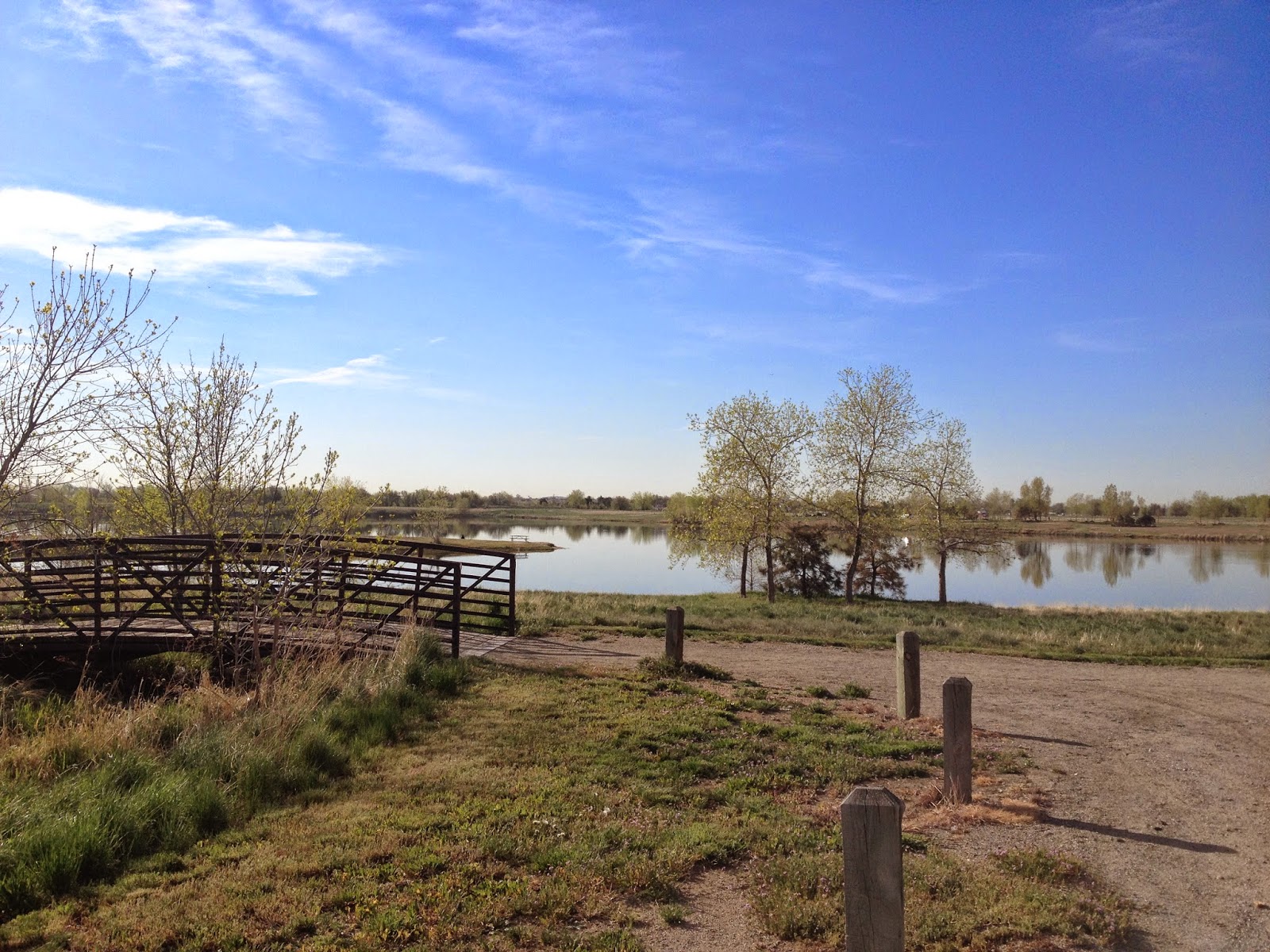 For about 3/4 of a mile, and got to run by some pretty trees: 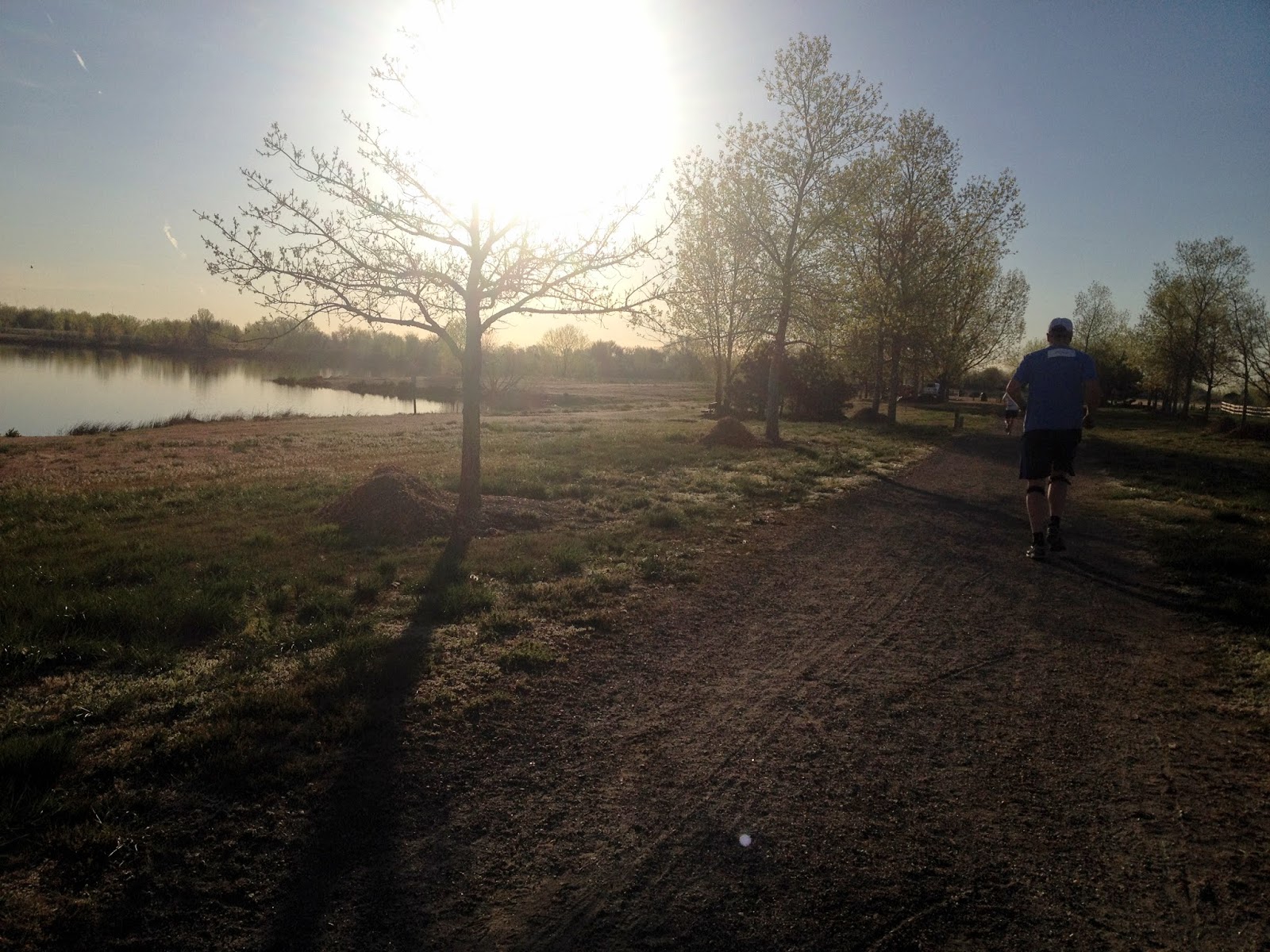 And then about a half mile on pavement... 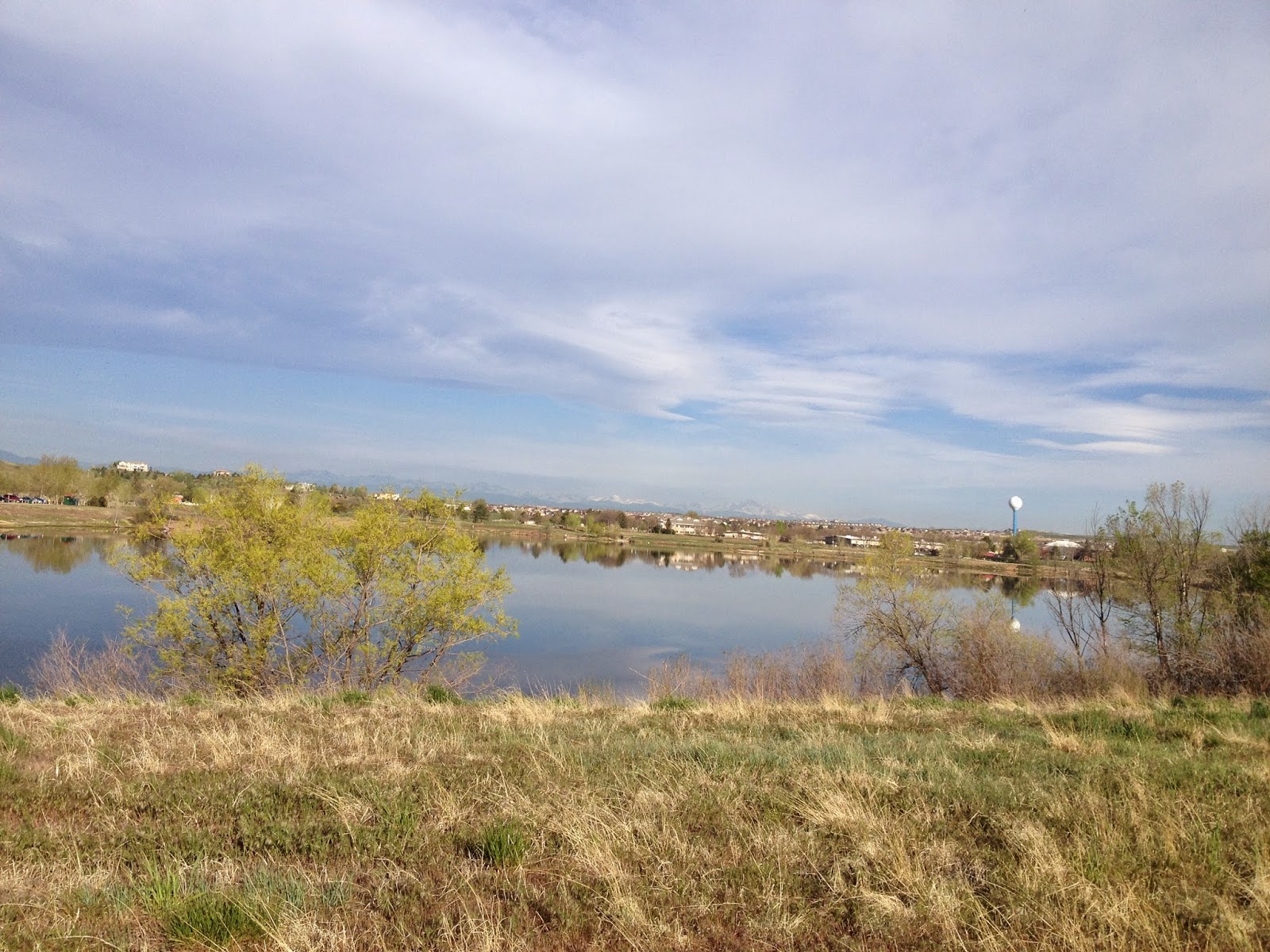 With NOT the worst view I have ever seen on a loop course: 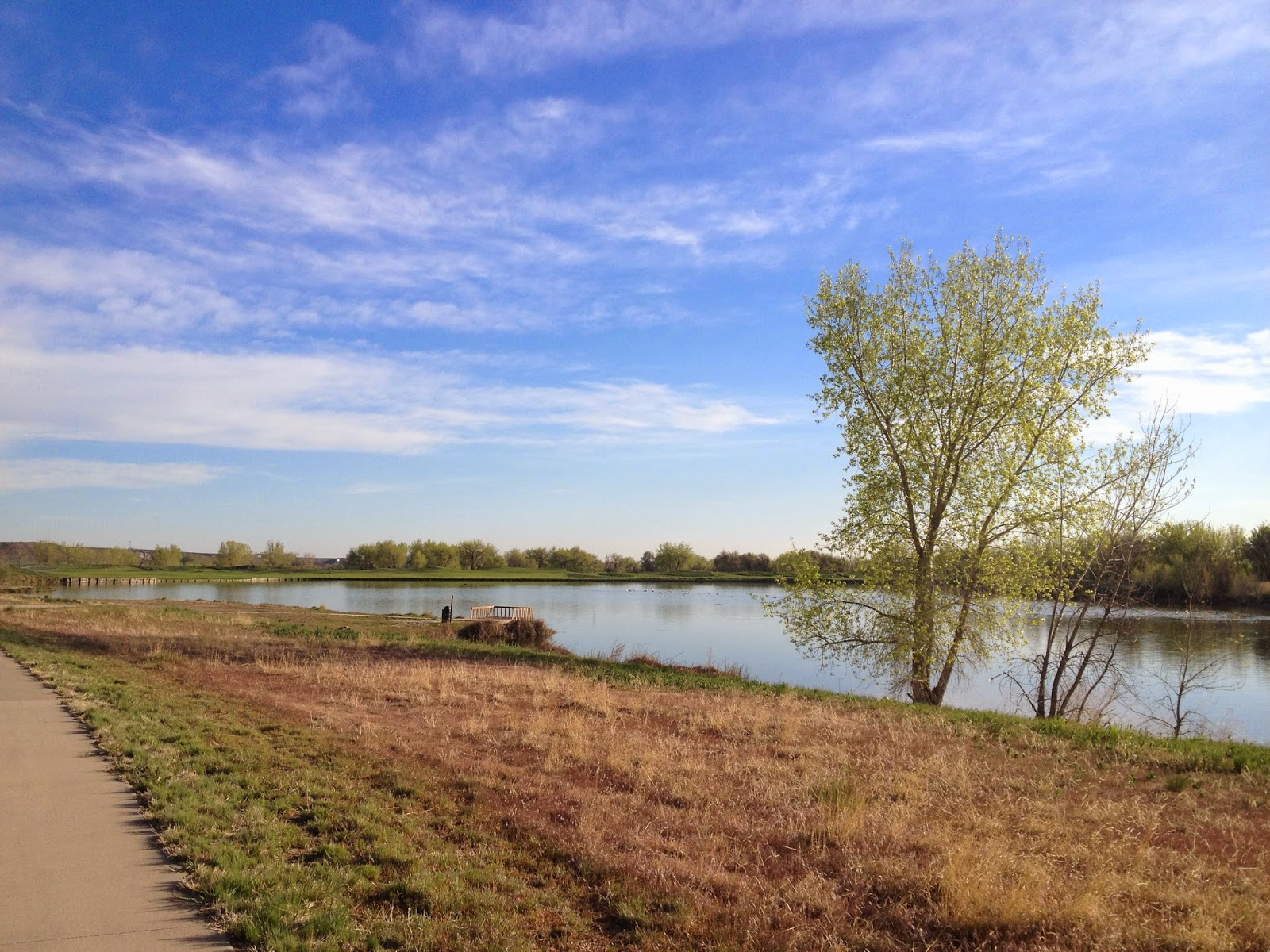 Before heading back out for about .20 on dirt to get back to the aid station. I had brought my own little handheld, but I left it under the pavilion after the first loop because I was already tired of carrying it. They did have cups of water and two flavors of Gatorade (lemon-lime and orange) available.

So... how did this go? Not well. As I said, the course "felt" uphill and I was tired from the beginning. I had quite a bit of the weird numbness in my feet (AGAIN) and my left food ached a bit in the later loops across the top of my foot. I'M FALLING APART. My calves felt a bit tight, but not to the point where it should have been an issue. Maybe I was just tired from finally putting speed work back into my training? I really should take two days off before races. Anyway... 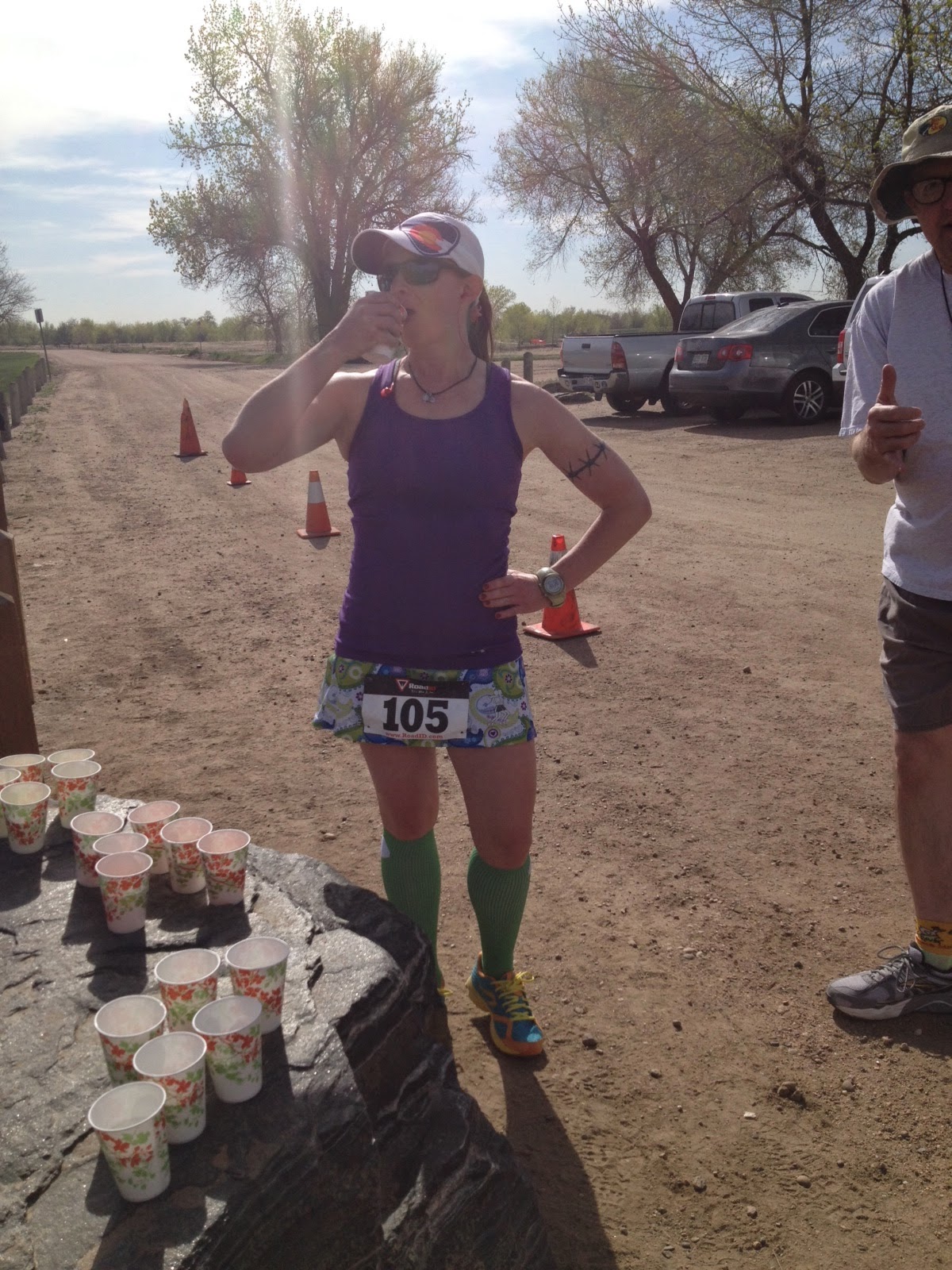 She decided to run with me for my final loop, and man, I was TIRED. It was nice to have the company though. 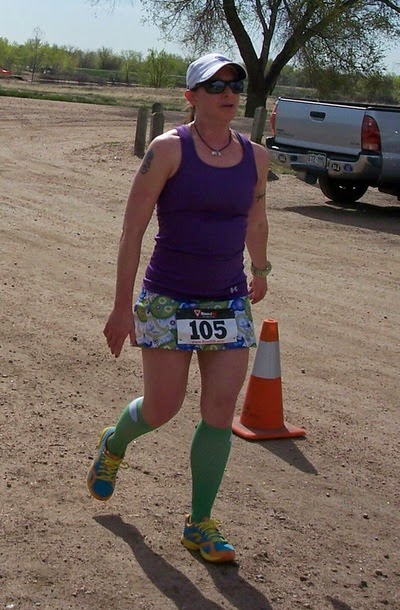 Since there were only 9 runners in the half, I was third overall, and 2nd female, over 30 minutes slower than L. L got a coffee mug for winning and I got a blanket. I LOVE PRIZES!!!

We of course had to pose with the giant scissors when it was all over: 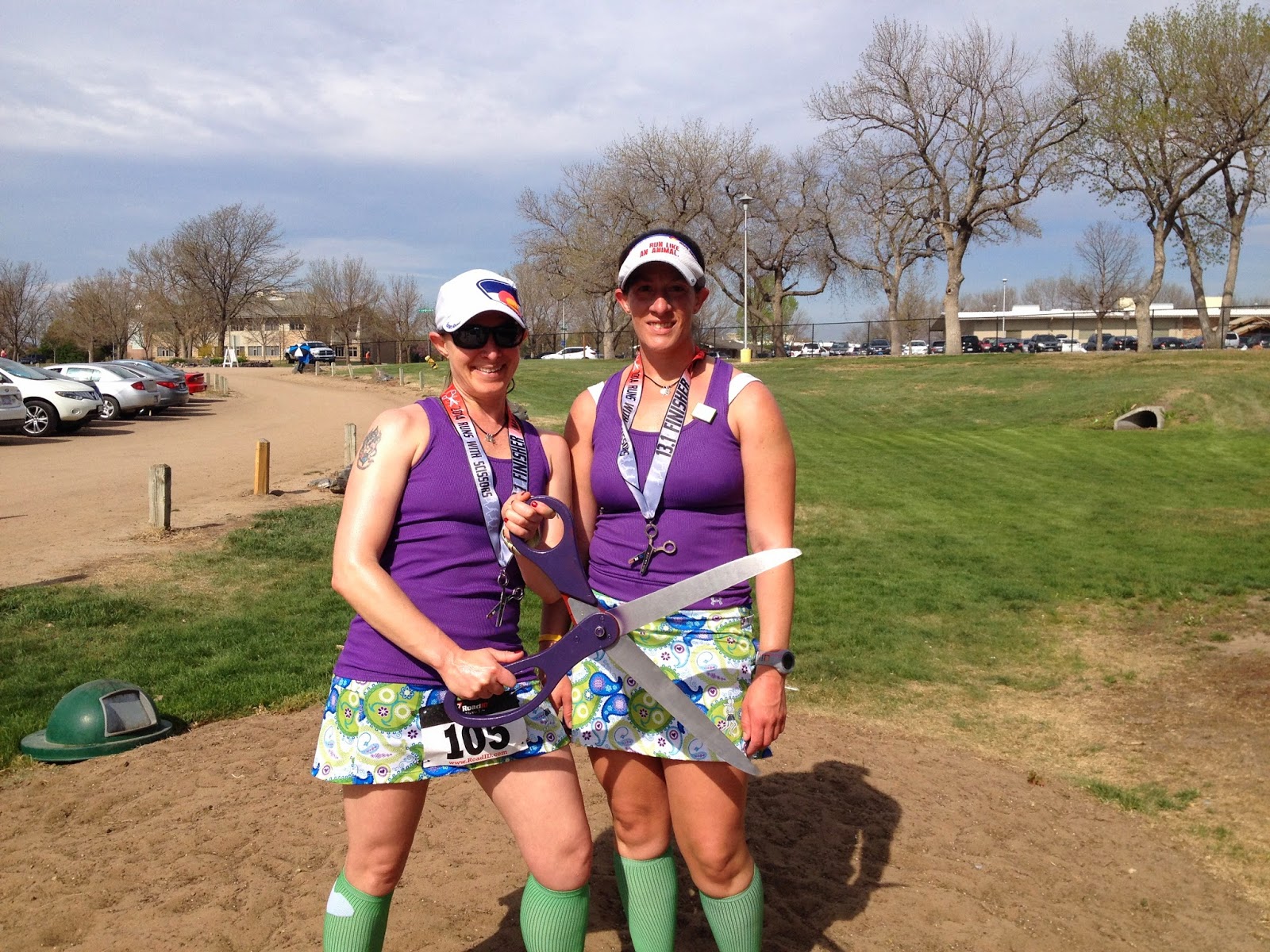 We stuck around to see how Ross did, and he finished only a few minutes after us. There was tons of food at the finish, candy, fruit, and PIES. An unbelievable spread for a small race! Literally, tables of food.

In addition to the coolest medal ever, we got a pint glass and a beanie for finishing: 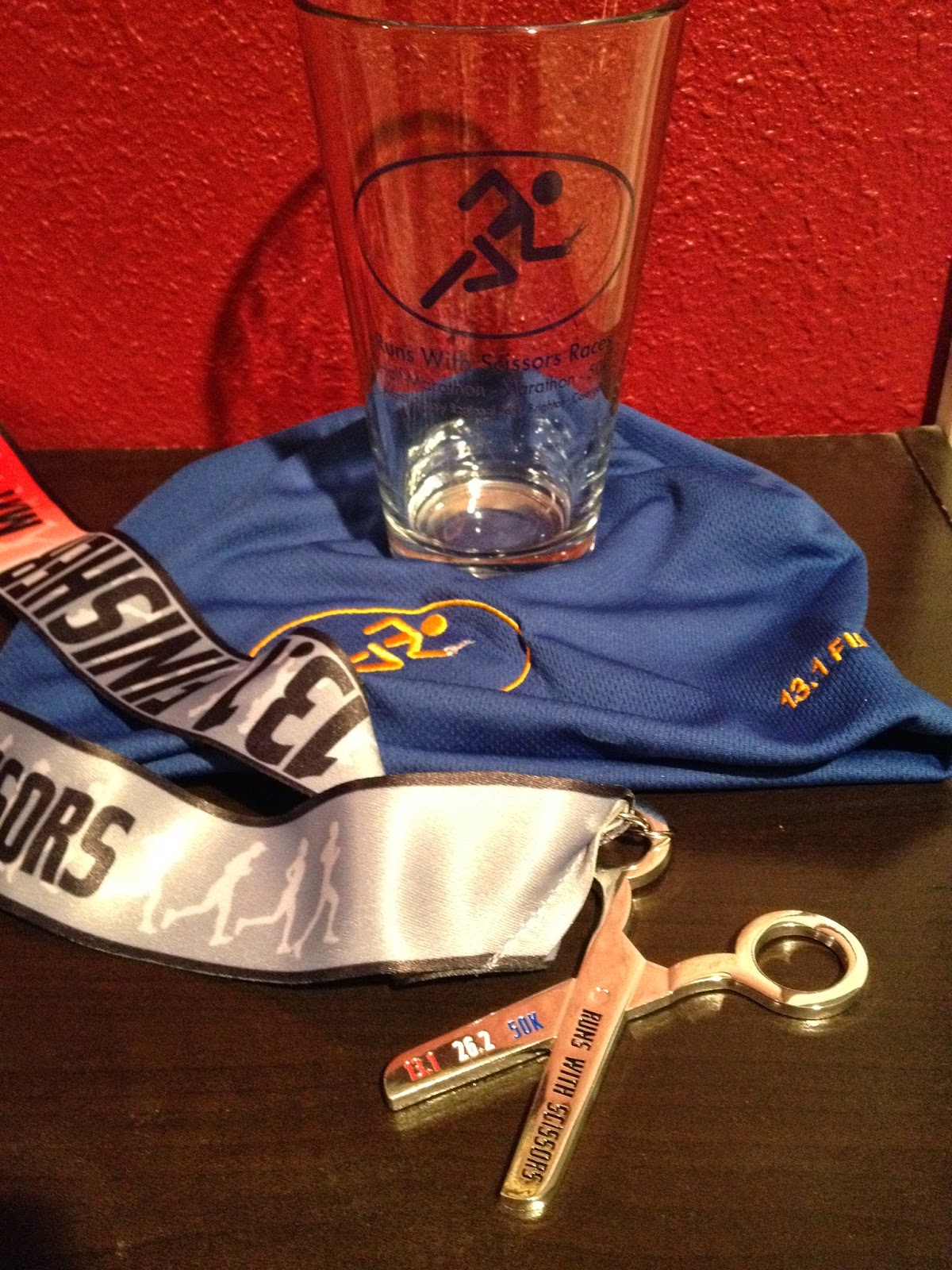 Email ThisBlogThis!Share to TwitterShare to FacebookShare to Pinterest
Labels: half marathon, run all the races, Runs with scissors

Tuesday  (18,933 steps) - Work in the office. No running today, just the regular walks. Big excitement was Pika spotting a coyote on our eve... 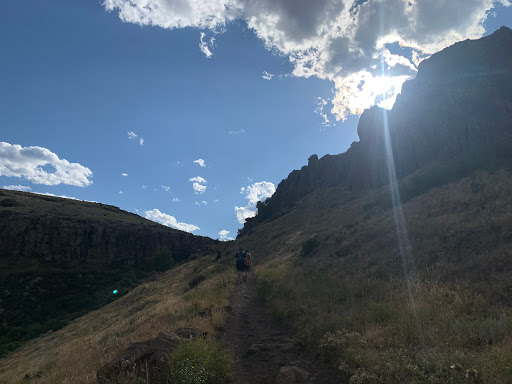