Initially, I was signed up to run the full marathon. I actually had no intention of running, but when Jared gave A money to sign up for the half - I was talked into it. I ran the marathon once, back in 2012, and remembered it being very challenging. However, I thought it would be a great "last, long run" before my next 100 miler. Due to circumstances changing, I ended up switching to a different 100 that was too close to be running the marathon. Back in April I dropped down to the heavy half - which would still be my "last, long run."

Unless you've been living under a rock, you know that the winter weather was NUTS - causing some big races to be cancelled due to snow & avalanche danger (Namely - San Juan Solstice and most recently, Hardrock 100). Pete and Janet had gone up to Leadville about ten days before the race and mentioned that couldn't see how the race was going to happen - as much of the course looked only accessible by snowmobile. A week before the race, we were notified that there was going to be a course change - that would remove Mosquito Pass from the route. HOORAY. That was obviously the hardest part of the course, and personally, I was not sad when I heard we would have a bit of an easier course. We got the info a few days before the race, but not knowing anything about Leadville, no idea what we would be running on.

After work on Friday I drove home to pick up A and then we headed up to the mountains (after a brief stop with the Heathers in Golden). We met Ben at Cheba Hut in Dillon at 7. After dinner we headed back to his house and watched some TV before heading to bed early-ish.

Wake up at 5 am, which was plenty of time to get ready and have coffee. We ended up leaving a few minutes later than planned (at 6:25ish), but still arrive in Leadville with plenty of time. We found a parking spot a few blocks away from packet pick up (which upon arrival, I realized ended at 7:30). With just over 15 minutes to spare - we were fiiiiiine.

Quick trip to the port-o-potties, then back to the car to get everything ready. By the time we walked up to the start line we only had about 5 minutes to spare. Just enough time to say hi to a few people before the Star Spangled banner... and then we were off.

The only part of the course that did not change was the initial climb out of town. We ran up 6th until the road ended, half marathoners went to the right, full marathon to the left.

Although I had glanced at the route, I wasn't really sure where we were going, nor how the course would be in terms of climbs. I also had neglected to notice that we would be running a "loop" mid course, and that the turnaround would be closer to 8 miles.

Anyway, I certainly appreciated that the course was easier and less technical. I tried to run when I could. First aid station was about two miles in - and was run by Roosters! It was great to briefly see Lisa, Carol and Brett. Then we had a nice downhill for about 2/3 of a mile before we ended up back on the road again. This was a very long climb. 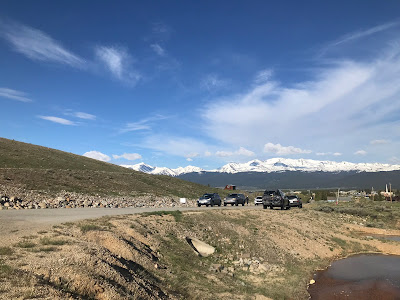 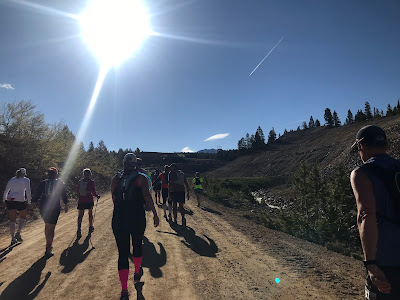 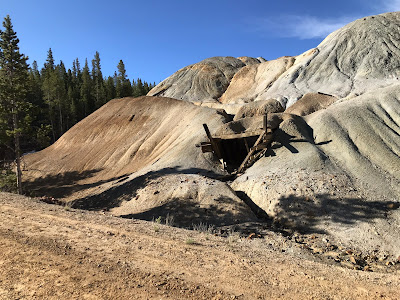 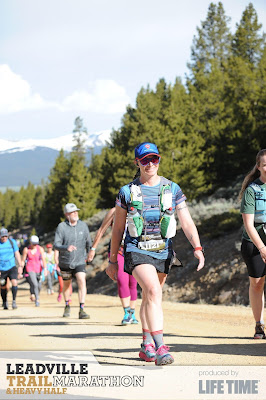 Turned off onto a section of trail, and had another nice downhill (which thankfully, we would not have to run back up later). I finally passed Kristin at this time, and she seemed like she was suffering a bit. 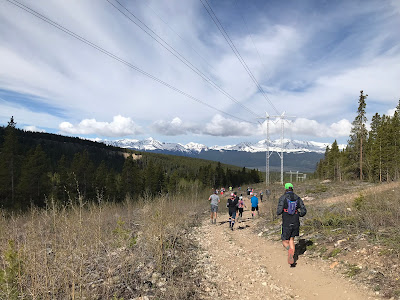 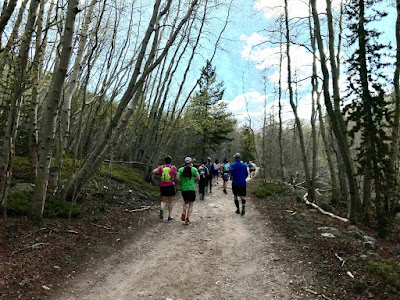 Even though the course wasn't really on single track, it was certainly pretty with blue skies and snow-capped mountains. 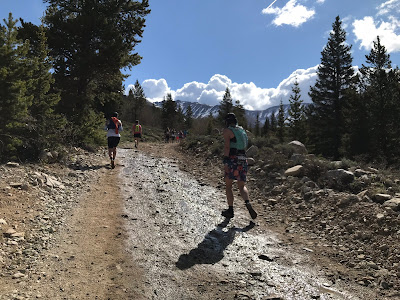 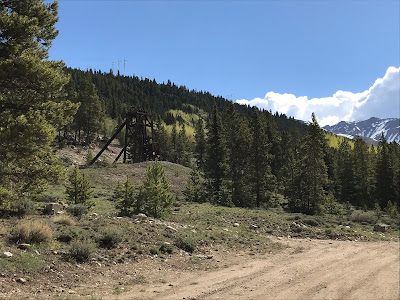 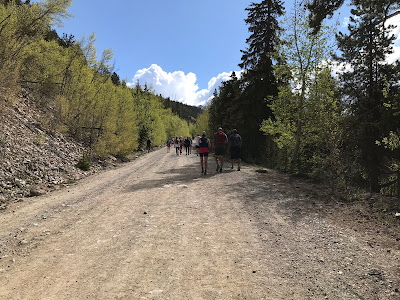 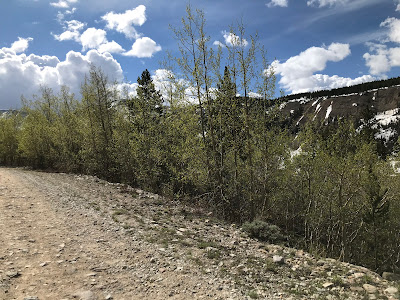 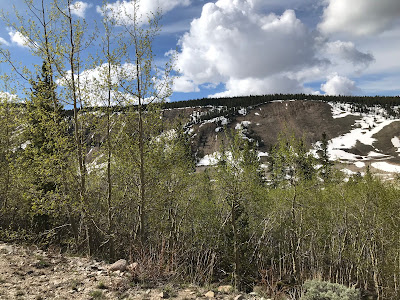 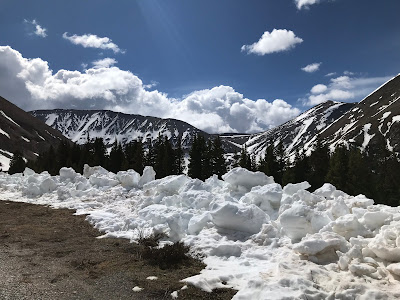 I really enjoyed seeing so many people I knew! It seemed like every tenth person was someone I recognized - which made the run a lot more fun. Came into the second aid station and I didn't stop. More. Uphill. It was sunny, I was sweating a TON. I had finally spent the money on a new bra (Smartwool strappy) and was hoping this would finally end the chafing that I've been getting - pretty much anything over an hour. I was, however, feeling like I was starting to chafe on my lower back. I quickly thought about the last two 100 mile runs I had done when I had chafing issues on my lower back, and I was wearing the same shirt. I made the executive decision to take off  my tee and just run in the bra - risking all sorts of chafing (not to mention, being extremely self-conscious with my beer gut hanging out).

As we climbed, there was more and more snow on the side of the jeep road. Finally, I could see where we were going to turn around. Pleasantly surprised that Ariel wasn't as far ahead of me as I thought the might be. Also saw Lisa right before the turn, and also impressed I was so close to her. I briefly stopped on the side of the trail to tighten my laces, took a selfie at the turn, and then started the run down. 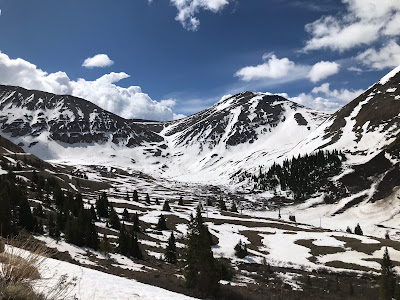 For the most part, the back half was pretty amazing. Got to see all the marathon runners heading up for the back part of their race - which meant even MORE people I knew! 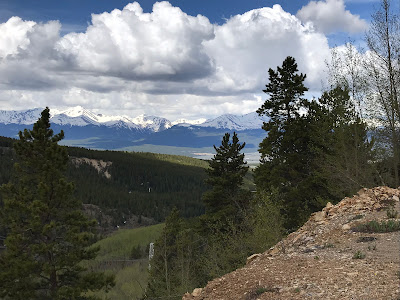 Finally saw Ben at the base of the hill heading into the last aid station. That climb was the worst of the whole course - probably because my legs were toast from working harder than I should have. It was also the only part of the course where I actually had to stop and catch my breath.
Came into the last aid station, said hi to friends, and took a few bites of watermelon before tackling the last two miles of downhill. I was having some side cramping, but was still running well - and much better/faster than I expected, which was nice!

I managed to pass green shorts with less than a half  mile to go - and was able to run on the red carpet through the finish alone. 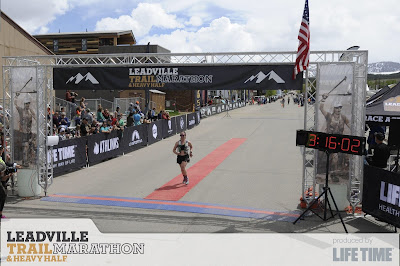 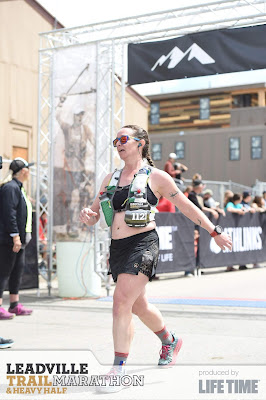 I scanned the crowd for Ariel, and when I didn't immediately see her I headed to the Roost tent. Spent the next few hours drinking beer and socializing with everyone. It was fun to see people coming in through the finish line.

Finally found A, and when we checked results, we saw that she got second place! (She ran an official time of 3:03:10!) And seriously, she takes the best race pictures. Glad there were people at the finish line that got pictures of her - she looked amazing coming in! 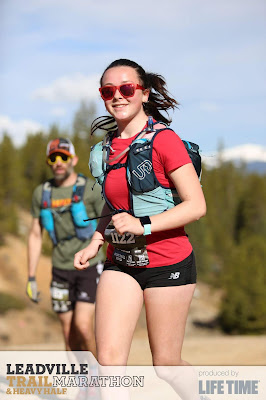 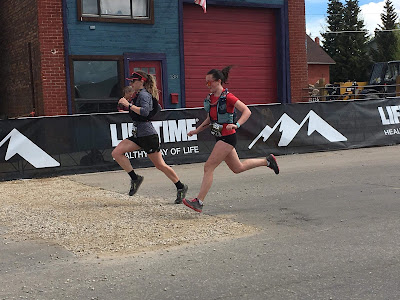 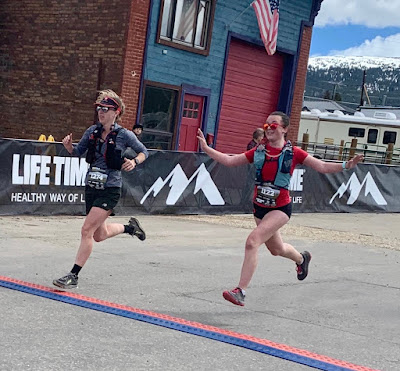 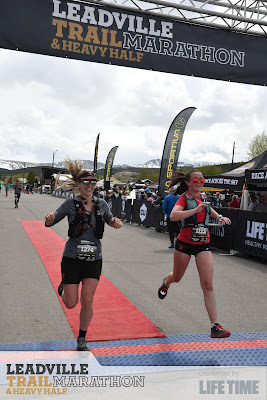 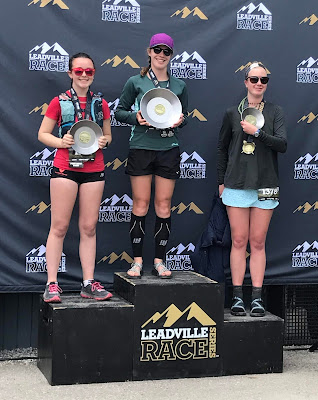 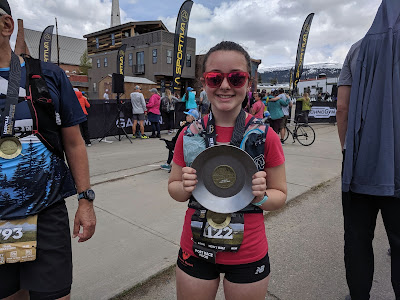 Was able to get a picture of her on the podium with her nifty pan before heading up the street to look for Ben. I ran with him for about a quarter of a mile and told him I wasn't going to run through the finish line with him, but I met up with him after.

We stuck around for about another hour, before heading to the car when it started to rain.