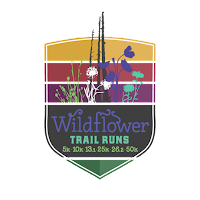 Shortly after running the Austin half marathon with Heather, I asked what other races she was signed up for. She mentioned she was running the Wildflower 25K in early May. I wasn't signed up for very many events, and once I found airfare for $95 ROUND TRIP, got the time off from work, I bit the bullet. 2 months before race day, it was only $70. What a deal!

Alarm went off at 5:20, although I woke up a few minutes before that. I had gotten everything ready the night before, so all I really needed to do was get dressed, put on sunscreen, brush my teeth and braid my hair. Threw everything into my bag, and we were out the door by 5:40. We stopped at the gas station next to the hotel for coffee. We had a minute or two when we weren't able to find where to park, but were at Mayfest Park within a few minutes (thanks for picking such a close hotel AND driving, Heather!). Grabbed our gear and then got in line for the shuttle bus to take us to the start line. It wasn't crowded and we were there within 10-15 minutes. 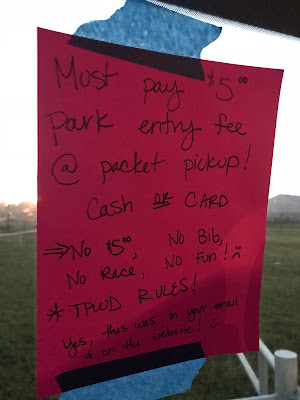 The starting area was not too crowded, and it took just a minute to pay the $5 for park entry and get our bibs/swag. I wish the shirts had been gender specific, they were pretty cute! Last thing I need is another boxy top, though. *Note, everything is bigger in Texas, EXCEPT race bibs from TROT! Tiniest bib ever, which was awesome!*

Ate my honey bun and cycled through the bathroom line a few times. The 50K had started at 6 am, and the faster runners were coming through as the 25K runners were starting to swarm the start line, which had me a bit worried as the course immediately started as single track. 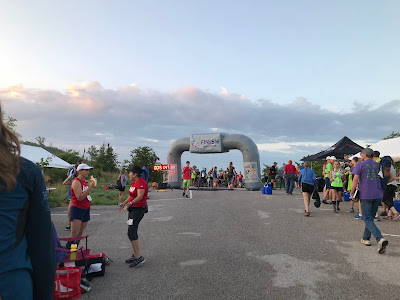 A few minutes before we started, the race director did some last minute announcements. With the course starting with a climb, he said that if you were running the whole hill, start in front, and walking, start in the back. Heather said she was planning on walking. I kinda wanted to see what my legs were willing to do, and decided to start mid-pack. We had been lucky to start the race with some cloud cover, but I knew that we were going to start baking once the sun came out.

For the most part, people started where they should have. The hill was really no big deal, and I was able to run up the entire thing (for lap one). There were a handful of sections when the conga line got a bit jammed up, but I had managed to get into a pretty decent rhythm. Not wanting to push too hard, too early, I settled in for the long haul. The biggest "climb" of the course was just before mile 2. Even THAT wasn't that big of a deal, but I figured it was a perfect time to take a walk break, as we were halfway to the aid station, and I could get a bit of a rest. 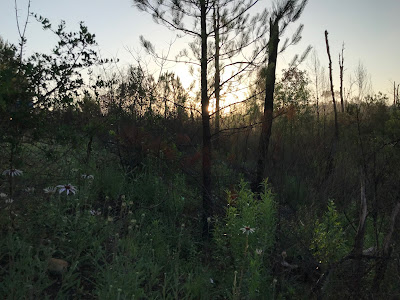 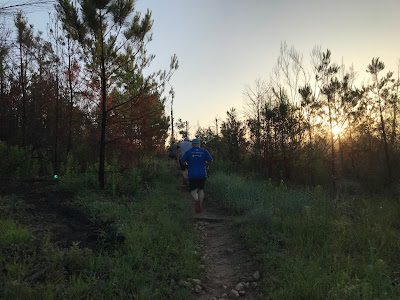 The next section was in a wide and exposed area that had a lot of dead trees from a recent fire (I don't really know HOW recent, just that at some point, there was one). We then entered another wooded section before hitting the road crossing (where I would turn off for my last, small loop). 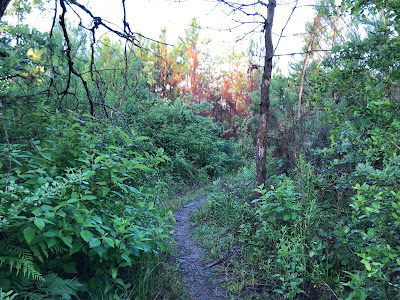 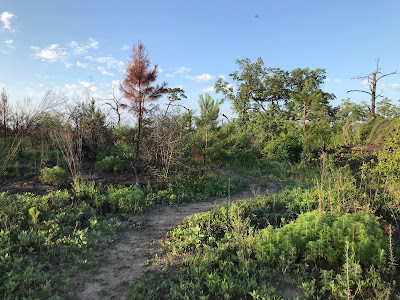 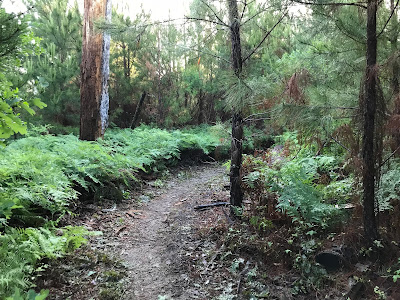 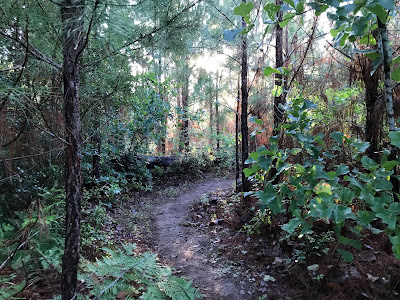 This section was more tree lined than others, and all of a sudden we were dumped onto the road, where the only on-course aid station was located. I was running well and didn't want to stop, so just got ice water in my bottle, grabbed a cup of coke and some watermelon and headed out. We had maybe a third of a mile on a wide, dirt road. A gradual climb, most of which I ran. Then we got right back onto the single track for a bit. There were some rollers, but nothing terrible. With about a mile to go we were on the wider dirt section back to the finish. There was a climb, and the only really muddy section of the route (surprising, considering how much rain Texas had seen the day before). 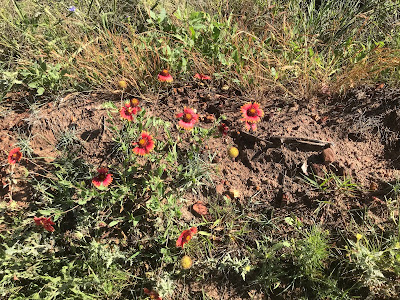 Crossed the road and then a small amount of climbing before getting back to the start line in 1:17. It was already getting H-O-T. I couldn't wear my sunglasses because it was so humid they were fogging up, and I couldn't wipe off the fog because everything I had on was drenched with sweat. SO HOT. Filled up my bottle, grabbed a cup of pickle juice, cup of coke and a cube of watermelon and headed out for my last big loop.

I probably walked a bit more of the first two miles, but it's already a blur. The 10K and 5K had started an hour after we did, and I started catching up to the walkers within the first mile or so. Most of them were very aware of people running and moved off the course without me even having to announce myself. Got a bit annoyed with a guy who was blasting Nickelback on a speaker out of his pack. He was running with a small girl and she kept sprinting to catch up and it was probably close to 10 minutes before I was able to get out of hearing range from that. Ick. 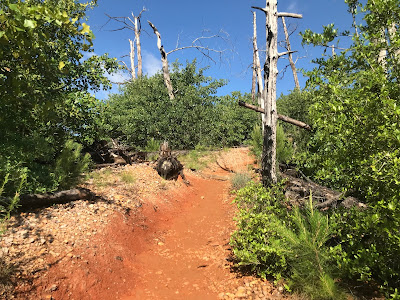 The wide and barren descent was HOT. I think I also walked more of this section. I kept thinking that I should probably actually eat something at the next aid station, since all I had so far was watermelon. 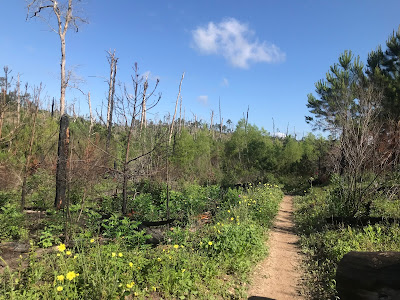 Finally got to the aid station, filled my bottle, ate a few gummy bears and watermelon, and headed out. Ran the road section, and did a run/walk the section to the road. The race photographer jumped on the trail right behind me about a tenth of a mile before the aid station/finish and said "I'm following you!"

Came in at almost the EXACT pace as my first big loop, within seconds, around 1:17. I knew that the small 5K loop was actually 3.8 miles, so obviously the course was going to be at least a mile longer than a traditional 25K. Ultrasignup had predicted I would run in about 4 hours, and barring injury or some other calamity, I hoped to finish under 3.5 hours.

Filled my bottle, grabbed pickle juice, coke, watermelon and a fig newton, and headed out. I knew that there was no other aid until the finish line, but I was practically done. By now, it was approximately 87 billion degrees. Salty sweat was running into my eyes. So thirsty! I had drained my handheld four times already because I was so hot, and it was catching up to me. I started to get a cramp from drinking too much. NOT NOW!! I'm running so well!!
Came up to the last big hill, and once I got to the top I paced with a gal who was running the 50K until we parted ways at the road. The small loop had a wide stretch of dirt jeep trail. I saw a gal in front of me that I really wanted to catch, so I concentrated on running as much as I could.

I'm not super dainty on trails, so passed a few people as I lumbered through the only muddy part. Just before the last single track section I passed the obnoxious Nickelback guy. Hot, hot, hot. Down the section with stairs, back up toward the finish.  Who knows, maybe there will be a video of my butt later.We met up with the section where we joined the big loop. We talked briefly, and I was able to get in front of her as I bombed the downhill section leading into the single track. On the stair section I came across... Heather! About a third of a mile to go, and I was definitely going to meet my goal! Crossed the line and got my medal. Heather came through shortly after and said she was stopping! She had rolled her ankle early in the second loop. Womp. I grabbed some trail mix and a watermelon slushie (BEST POST-RACE DRINK EVER), then we got on the bus. 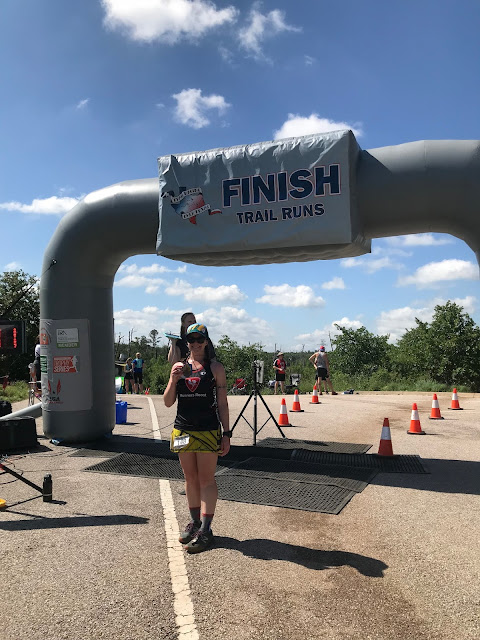