Tuesday (18,042 steps) - We had the week off from speed work, so we met up with some of our Belmar friends at Sloan's Lake Tap & Burger for another run club. I ran the first loop with Dulce and was feeling really good, so I ran another loop by myself, for a total of 5.5 miles. Pasta and salad were on the house (!), so we didn't even have to make dinner when we got home. Fun times!
Wednesday (15,138 steps) - We set our alarms and got up early to walk to the lake to see the Super Blue Blood Moon! Unfortunately, we didn't realize that totality would last over an hour, so we missed it, super sucky. Left the house about 20 minutes too late. We did see a nice sunrise, however. 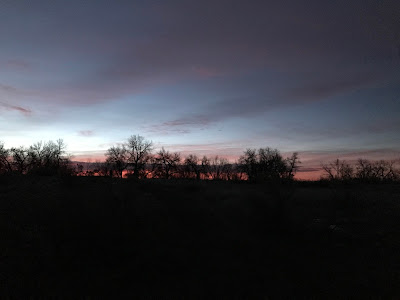 Opted to skip our weekly run on the Boulder trails for a fun off site run with Denver Runners Roost at Crazy Mountain. I had planned to run with Alison and Dulce, but ended up doing 4 miles with Tony. Food was catered in from Cuba Cuba and we got a beer on the house. Another fun night! 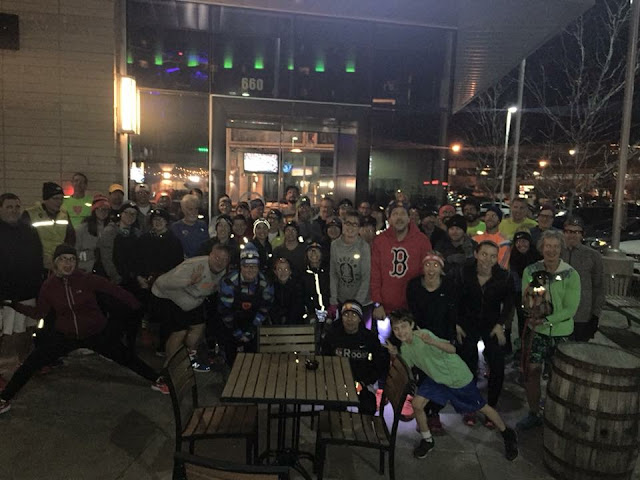 Thursday (14,079 steps) - Belmar run club! I did a little loop alone before the group started, then did a big loop with Samm and Dulce, and then another little loop. I had forgotten my vest and a jacket, so I was pretty cold. 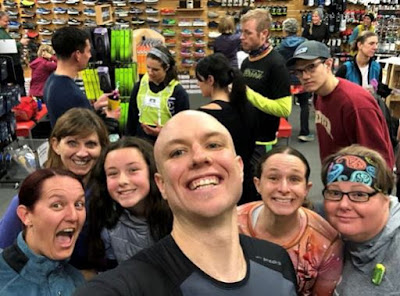 Friday (9,283 steps) - Barre with Sasha. We watched Groundhog Day since A had never seen it.
Saturday (28,346 steps) - Runners Edge! Thankfully, we didn't have an aid station. I committed to running 12 with Kristin. It wasn't terrible, but it was pretty warm and super flat routes kinda hurt. Due to aid station placement we were closer to 12.5 miles. 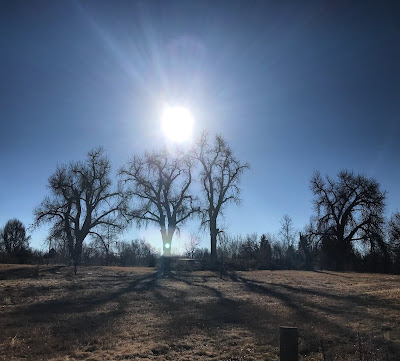 Breakfast at Einsteins, then off to the dealership so Lucy could get her first oil change. Almost three hours later we were finally home. Watched Office Space and then... picked up Girl Scout cookies. Already. 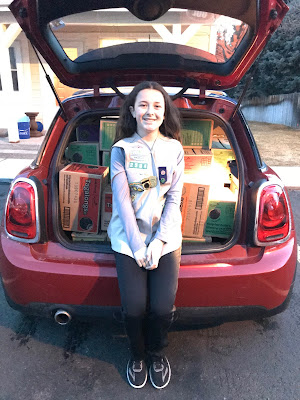 I decided to finish purging kitchen stuff. I pulled out FIFTY coffee mugs/glasses to donate. 50. And we will still have more than enough. How on earth do we accumulate this many? I had already donated things like sport bottles a year or so ago, so this number used to be much higher.
Sunday (13,092 steps) - Runners Roost MUT kickoff! The group was supposed to run our regular Wednesday route, but it was so cold and icy that we decided to skip the run. 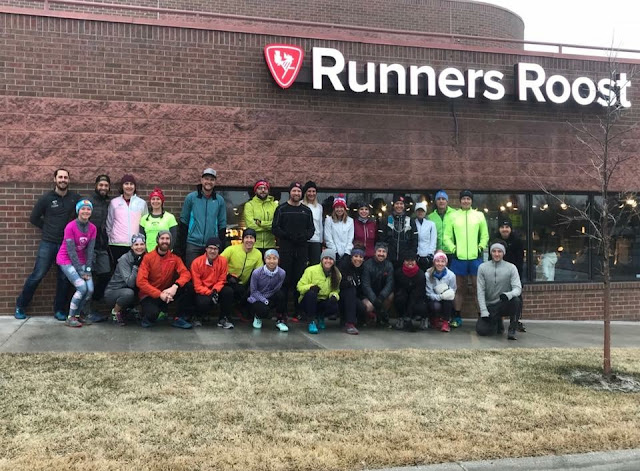 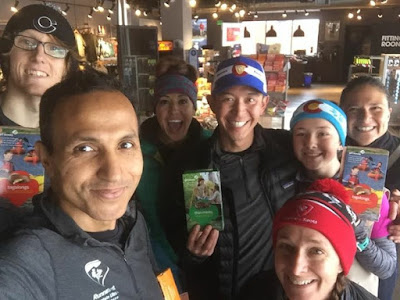 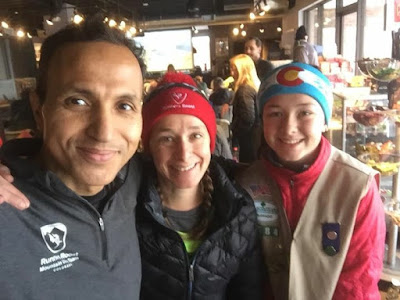 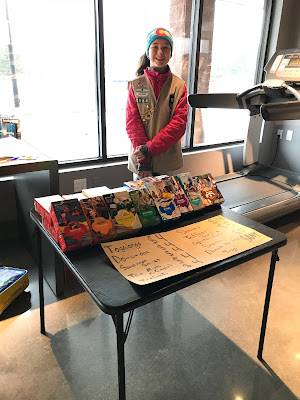 We helped set up and just chatted with people in the store. Stuck around until 11 so A could sell cookies. 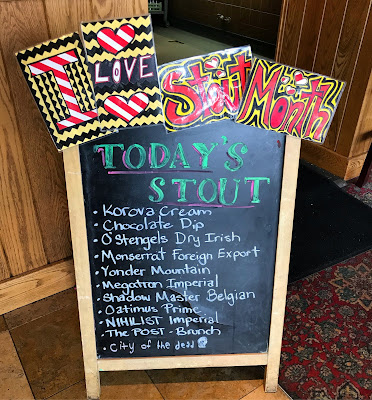 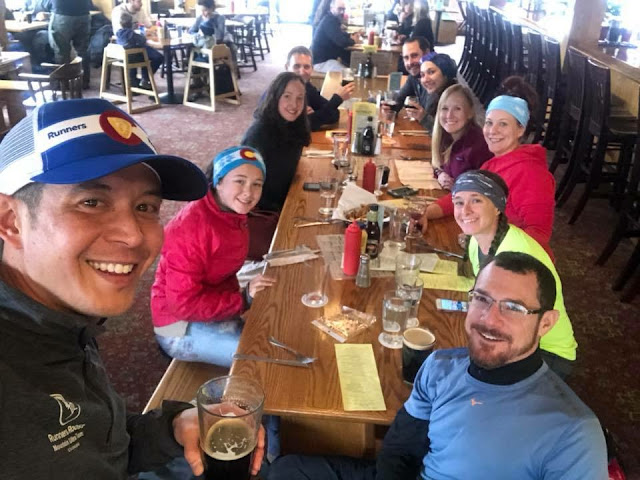 Beer and snacks at Southern Sun, then onto Chloe's birthday party at Skate City. I dropped off A and ran my 4 scheduled miles solo on Clear Creek. 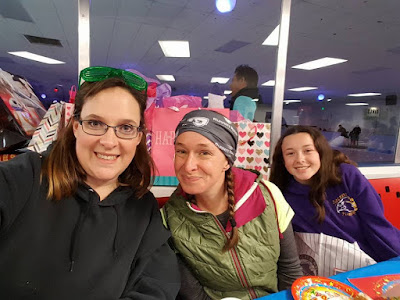 Picked up A and then went to Ben's to watch the first half of the Super Bowl. Left after the halftime show, finished the Super Bowl at home. Long/short weekend.
Monday (13,377 steps) - Barre with Karen. Headed over to Cheluna Brewing to meet up with the brand new run club for Runners Roost Stapleton. I was kinda sorta familiar with the area, but it was really dark and I wasn't running with anyone else and missed about 2/3 of a mile of the route. 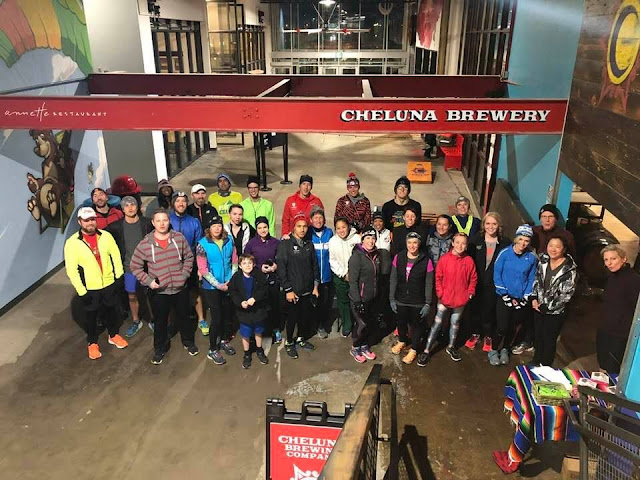 It was pretty cold and windy, so 3.2 miles was plenty. A sold cookies and I had a beer and unofficially played trivia. Late night, we didn't get home until 9.