We had such a good experience at the 2016 edition that we opted to go for it again in 2017. The 24 Hours of Palmer lake "fun run" underwent a name change for 2017 - to the Palmer Lake Death Race. I don't know why I found that so funny, but it's kinda true.

We got up around 5:30 (no thanks to my phone, which AGAIN had my alarms go off without sound) and were on the road by 6. We were parked at 7:01, found Jandy right away and set up our tent right next to her.

Bib pick-up was easy, all we we had to do was sign a waiver. Last year we didn't have bibs, so this was a new "fun" perk. Ate our donuts, cycled through the bathroom line, and of course got the pre-race selfie. 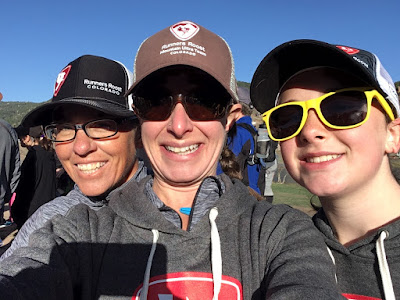 Race started on time at 8:00, and the first lap was a "race to win a hydration pack" that we did NOT partake in. We settled into a slow and easy pace and the first hour flew by. Of course, as the day went on, the miles became slower and more difficult. Every four hours we switched directions, you know, to keep the .82 mile loop "interesting."
The mileage boards weren't going to be put out until afternoon, so we had to keep track on our own - we opted to do slash marks on the backs of our bibs. It's harder to remember than you would think!

Our friend Lisa came over around 1 and ran some loops with us (after she had already run a technical 25K earlier in the morning). She ran Jandy and I in for our "marathon loop" - which took us just under 6 hours. By this time, we had already started our run/walk - using landmarks to determine which sections we would be running.
A hit both her marathon distance and 50K while it was still light out! Her goal was 40 miles (!!!) but I had the feeling that she wouldn't stop there since she still had so much time left. Jandy's family arrived around 4 and A ran/walked some loops with Landon, while Jandy and I kept plugging along.
We ran with our friend for a loop while he hit his longest distance ever (34 miles) and of course memorialized the moment with a selfie. 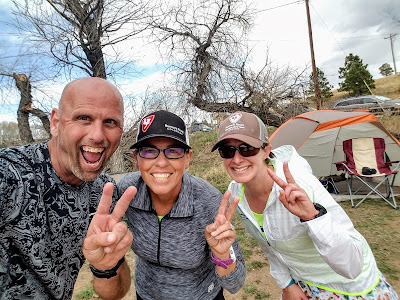 I had started the race wearing my New Balance Leadville shoes, but they got more uncomfortable as the day went on. Both of us decided to change into our Hokas for more cushioning (it was totally a last minute decision to bring these, but glad I did). Shortly before the sun set we opted to put on our tights so that we wouldn't have to screw around with doing it in the dark. At dusk we did one loop without a headlamp, hoping that it wouldn't be dark enough to need one. The moon didn't come out for a long time and it was cloudy, so we had to use a light for the rest of the night.
By now we were just walking and trying to keep moving. A decided to try to sleep when she hit 38 miles, deciding to finish her last miles in the morning. I was surprised she stopped so early (9 pm) as she was pretty gung ho about running at night. She only stayed in the tent for a few hours before telling me she was too cold to sleep. For most of the night she would sit in the car while we did a loop and then she would join Jandy and I for 2, repeat.

Around 1 am I was so tired that I could barely keep my eyes open. I asked Jandy if we could take a 15 minute nap break, and agreed to run with her until she hit HER goal of 87 loops (71.34 miles). The nap totally rejuvenated me! I felt a ton better after that. A had increased her car breaks to two loops, so when we got done with our 85th lap, we woke her up so we could do our last 2 laps together (her getting her 50th mile(!!) and us getting our 71st).

We finished about 5:55 am and decided to take a half hour nap and then check the standings again. When we stopped, Jandy and I were 2nd and 3rd female, and we didn't want to risk losing our standings. The 30 minute nap was a lifesaver, and around 6:35 we headed back over to the start, where we saw nothing had changed, but we decided to do a "victory lap" anyway. When we got back into the start, all of a sudden the woman in 4th had added some tick marks and was ahead of us by one loop (urg, that seems like cheating!) so we decided to keep going. We "ran" all the way until the clock stopped (well, 7:53 am, because we didn't have time to complete another in 7 minutes), with Francesca running the last two with us.

About 100 yards from the finish line, the race director told us that we were tied for third female and one of us needed to cross the finish line first. OH HELL NO. We didn't run together for 24 hours for only one of us to "win." We opted to take the tie and joked that we could share custody of the award.

There was no formal awards ceremony this year, so we just took a handful of pictures, tore down the tent and headed home. 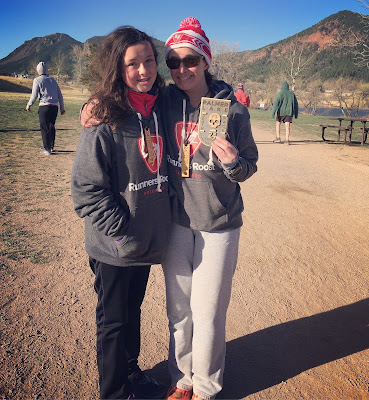 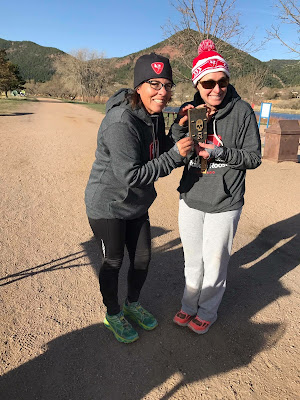 I had no real goal going into this race, only a hope that I could complete more miles than last year (66.42) - which I did. A was just a rock star (again), and we both had a memorable time. Unsure if we will go for it again next year, but it's pretty cool to get an award, after placing 4th in three of the ultras I ran last year.