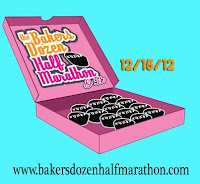 I was SO excited when I saw that Fast Cory was going to put on an OFFICIAL race this year. The Baker's Dozen was immediately added to my calendar. Combining sugar/eating and running? Um, hello. That's practically the dream. The race itself, SUPER cheap - $35!! In order to earn your AWESOME medal, you had to eat a sugary treat at the sugar shack at the end of each loop, so a minimum of three items. Sweet.

I lucked out finding a one way flight from Vegas for $60 and cashed out miles for the other flight. Rental car was crazy cheap, and so was hotel. The entire weekend pretty much cost what ONE Rock 'n' Roll entry would. Ahem.

Friday morning I took A to school, stopped at the store on my way to the airport, and still arrived with plenty of time to catch my flight. L had managed to book the earlier flight, so she was waiting a few hours for me in Vegas.

By the time we got the rental car, it was already about 1:30. We immediately went to In N' Out. I know, we normally do that AFTER we run. And then an hour after THAT, we stopped and got munchkins from Dunkin' Donuts. Does that count as a warm up for the race?

The drive was a few hours, and seemed MUCH longer. We arrived at packet pick up right at 5:00. Fast Cory recognized us, and seemed really happy that we came out. We grabbed Ruth's stuff too since she wasn't due in for hours. There is a story here. Maybe we accidentally got into the wrong car in the parking lot and didn't notice right away. Or maybe that didn't happen.

We decided to get dinner early and go to bed early. Bread bowl from Domino's (not the mac n' cheese, sadly that is discontinued) but Italian sausage marinara. Tasty. L was in bed by 8, I was asleep by 9.

Slept GREAT. Woke up at 6:30, got ready, and headed down to get breakfast. Sadly, there was nothing appetizing, so we had to head back upstairs for our bagels. Heading outside and it was raining. Sigh. I'm a bit tired of running in the rain.

We had a hard time getting GPS to work. On our way to the start, there was a BIZARRE procession of police cars and other emergency vehicles. 7 am, and they all had their sirens on. It was like there was a parade or something going on. Only there wasn't. Turns out our directions were NOT right. We got a bit turned around but luckily Cory had included some landmarks in his list of directions and we found the start.

Quick trip to the bathroom, and then we just sat around in the car until the start. Cory had a cool idea for a mandatory pre-race picture (courtesy of Alex Santiago, photographer extraordinaire):

The race just sort of started, and off we went. In addition to our goal to win the title of "Sugar Slayer" (she who eats the most baked goods), I also was running with a 20 oz diet coke. Sounded like the most appealing thing to drink with all that sugar. Yum

Loop 1 - It's pretty chilly, so I am wearing my arm sleeves and gloves. We had started in the back, and since my running has been so awful lately, we obviously were not pushing the pace. The first part of the loop felt uphill for sure. I had to walk early - tight calves AGAIN. So tired of this. We enter a dirt/gravel path and I start to feel a little warm so I take off my gloves. The aid station on the far side of the course is water only - I take a cup and we walk a bit. 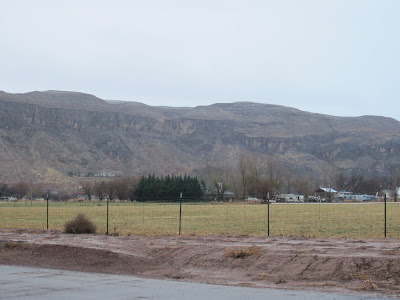 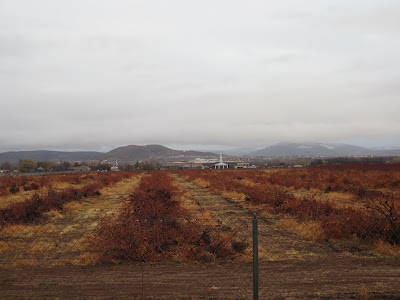 Turn the corner, and we run. I am ecstatic that the back half of the course is flat/downhill. Excellent. Bathroom first and then we arrive at the sugar shack for our first treats. We eat. And eat. And eat. See the big plate in the middle? We each devour 7 of those bad boys. Our goal was to eat as much of the non-frosted goods as possible. Favorite snack this round was the snicker doodles. Yum. 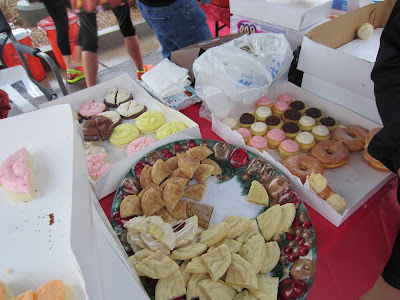 While at the aid station, we meet up with the previous years winner. Since there is a separate men/women's division, we feel confident in discussing our strategy.

Loop 2 - The diet coke is FANTASTIC. As soon as we leave, we are wondering if we should have done more. We both feel "fine." I have to walk a bit again on the gradual uphill. Not too keen on the dirt section, the ground is really soft. We are running behind a big group of runners that sounds like they are having the time of their lives. It's fun :D Quick walk through the aid station and then again, run the entire back half.
By the time we get to the sugar shack at the end of our first half of the race, there is nothing left that isn't frosted or huge. We try to eat a half a donut. I vaguely recall donuts just sort of dissolving in my mouth. NO. THIS WAS NOT THE CASE. I swear it was like chewing dough. Wasted so much time on ONE item. Had a total of 5 items the second time around, for a total of 12. The volunteers look horrified as we keep stuffing our faces. Favorite of this round? The red velvet cookies with cream cheese frosting.

Loop 3 - It has "warmed up" now to 40 degrees. However, it is now raining. Brrr. I was actually not really complaining, at least it was not windy! Heading into the dirt section and the volunteer offers us a beanie. How nice! I have to stop and use the bathroom at the water station. Overall, I still am feeling fine. Run the back section, and pass the big group right as we are heading into the sugar shack for the last time. We ask the volunteers if we are still in the lead. WE ARE NOT. What????? I had eaten a couple more treats, bringing me to 15. Only to find out the lead female was at 21. 21??? I don't think I want to stand there in the cold rain for another few minutes and eat frosting covered THICK cookies or powdered donuts. We have failed. I slam the rest of my diet coke, give L my gloves, pull down the arm sleeves over my hands and head out for the last loop.

Loop 4 - 41 degrees. It does not FEEL like it is 41 degrees. L says, "I am not complaining, but this might be the coldest I have ever been." It WAS pretty cold. The rain is turning into snow, and the gutters are filling up. Having flashbacks of CIM. Quick cup of water, but we really just want to be done. SO COLD! We are trying to catch up to the big group, but it appears they also just want to be done. We are probably less than a quarter of a mile from the finish and the rain/snow stops and the sun starts to come out. Ha. Figures.

We get our AWESOME MEDALS. Cory thanks us for coming to visit, hooks us up with some awesome water bottles and gift cards for Road ID, we took some pictures, then we had to (of course) head out so that we could shower before heading back to Vegas to catch our flight.

We arrived at the hotel with plenty of time to take scalding hot showers to warm up, pack, and headed out right at noon. We stopped twice on the drive back to Vegas to get gas and to eat lunch. Yes. We shared a medium all meat pizza from Godfather's. Clearly, my stomach is broken.

Arrive in Vegas with about 3 hours before our flight, so we walked around the outlet mall for a bit, then headed to the airport. Played the penny slots until I lost my $8, then I got MORE food. (WTF, me). The mac n' cheese proved to be too much, and I actually couldn't finish. Phew. Maybe I *am* human after all.

Flight back to Denver, uneventful. 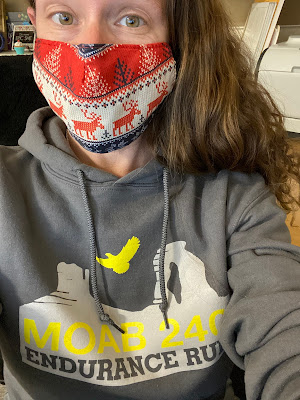